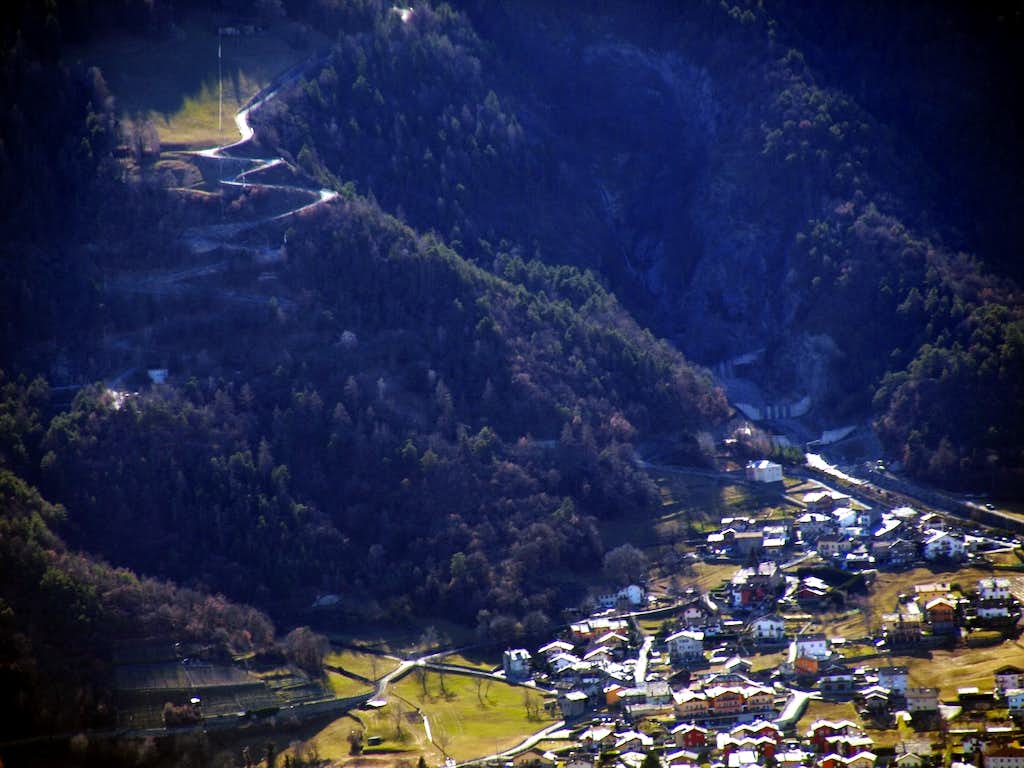 Middle and lower sector of Gorge du Dard between Gorrettaz Village (1089m, in left or East) below the Becca di Nona (3142m, to the left or East) and Le Pointer, Reverier Dessous, Reverier du Chat, Reverier Dessus Hamlets (970m, 1042m, 1049m, 1124m to the right or West) under the Pointe du Dard (2033m, in West) from North. NOTE: almost at the bottom of the gorgia and below the S.M.S. (Alpine Military School of Aosta, mainly on the right or Western walls) you can see the three bridles for containing the water on the Comboé Torrent (stream); the same were built after the great flood of 2000, such as to cause seven deaths in the underlying Villages of Saint Bénin, Chenaux and Chenières (which appear here as a whole). These serie of little village by Pollein 's and Charvensod (Roulaz and High Felina) Municipalities are sited just under the Santa Barbara Chapel (about 670 meters, squared white home at the highest point) nearby Roulaz (632 meters to the right or West) , Chenaux, Chenières, Cretes Hamlets (640 meters, 613 meters, 591meters) from North-northeast. The road you see on the left or East goes up with narrow hairpin bends to the Villages of Rongachet (1100m), Terre Blanche Dessous, Chenoz, Terre Blanche Dessus, Gorrettaz, La Barma, Marchauchy Desòt, du Meitin and d'en Haut reaching the entrance in the Vallone dell 'Arpisson, located at the foot of the pyramid of Monte Emilius (3559m). February 12th, 2020 Photo by Osvaldo Cardellina
« PREV NEXT »