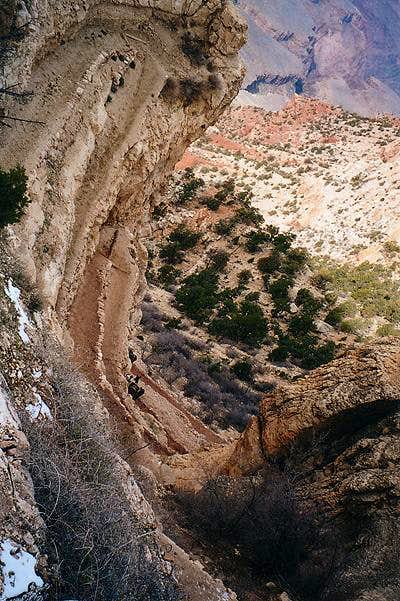 It looks so steep. I hiked this trail twice, and do not remember it so steep....but still remember cramps in my legs....

:) As for the picture... I remember lying down on my stomach and hanging over the edge of the trail a bit (while my friend braced me) to capture the steepness a bit better! And as for leg cramps... this picture was taken on the first time I took this trail - and it wasn't the plan to hike it. My friend and I were driving through the area and figured we had to stop to see the Grand Canyon. Neither of us had any idea of how blown away we would be by the sight of it. It was mid-morning and we decided that we had to hike a bit of the trail to get a different vantage of the canyon. It wasn't too long into the hike that we were both thinking the same thing - there's no way we can stop and turn around! It was just too amazing. We both had food, water, extra clothes, it was a cool December day... why not? So we hiked to the river, had a very cold swim in the river with someone we met down there and then it was time to hike back up. I don't remember exactly what the time was at that point, but everyone we saw was asking "You're hiking back up???" While it was funny to see the blank expressions on their faces when we said yes, it was even funnier when we explained that "Yes, we're hiking back up and then we're driving back to Canada right after." We had a party to get to the next night so we exchanged driving and sleeping shifts until we got back! And we made it to the party. :) It went pretty well, but we had to hike the last hour or so in the dark... and I remember getting cramps a bit too because of the pace we were doing. I did the trail again a few years back and must not be in the same shape as back then... it was a two day thing this time and I found it plenty challenging that way! Sorry for the long story... just had to share it!

It is a great story, so you should share it...Grand canyon is a very magical place, and it is not a real visit to that site unless you hike down. And I am sure that you had a nice story to share at your party!