The idea began as a joke, after the laughter from all the people, we starting to think the possibility to do it in just one weekend.

We made plans to climb the highest point from these flats countries. The problem was to find them. These countries are almost flat, and the exact highest point in some cases is cause of controversy.

On the planning we will try to combine our "expedition" with some grindcore/metal shows in the near cities. We have a car with mechanical problems, an old map of dutch roads and no much money. 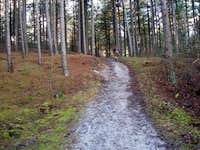 HOLLAND:
Starting this amazing trip on this flat country, really nice places, flat in all sense. Vaalserberg is in the providence of Limburg-Vaals, at south-east. After a couple of hours in flat terrain, starting to go up and up the hill. 10 minutes after that we find the concrete mark "Hooste Punt Van" at side of the parking area.

We are looking for some trekking, so, we decided to get down walking the tiny hill, then back again walking in the small elevation, 40 minutes around in the nice forest. Finally we climb the concrete signal, and reach 1.50 meters extra altitude. That's real challenge!!! 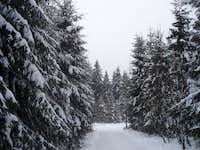 BELGIUM:
Signal of Botrange was very similar, a flat area surrounded by nice forests. This time with lot of snow and cold f**ng COLD!!. There are many trails around the tower in the exact point from the highest summit. We walking a 2 hours trail on ice and snow. Lot of iced streams and completed frozen trees. Wonderful views. All time are in real danger, all time trying to avoiding lots of fool skiers.

The Tower of Baltia is a 6 mts upstair closer to the main tower, so we reach 700 meters above sea level. Extremes of extremes!! 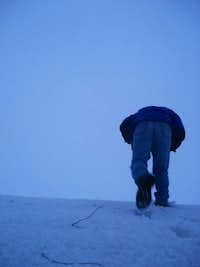 Final steps to the summit 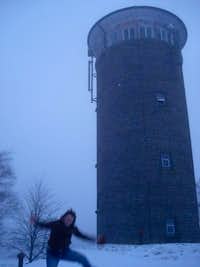 LUXEMBURG:
Just one summit left!!! in middle in our enthusiasm, we want to go faster cause in the cdplayer is Rotten Sound and Nasum playing, but was impossible, we drive very slow, lot of snow and visibility was about 10 or 15 meters. Plus our old car hasn't equipment to snow.

After lot of miles driving with cruel weather we finally arrive to a small village Troisvierges. Without any idea where to go next. Nodoby is outthere and we wait patiently. Then in middle of the storm we look a couple of persons. We ask them about the highets summit from Luxemburg, they told us about a closer town Huldange, there are 2 summits with 1 meter high of difference each other. 1) Op Kneiff and 2) Buurgplaatz. Walking around this area we finally find both summits with 20 minutes hiking. On Buurgplaatz is a big Tower similar to Signal of Botrange in Belgium. We need to climb on snow the 4 meters hill. Hardcore!!!
HOLLAND AGAIN:
Our trip was finalized with great success, but we want more. We back to Holland and try with a couple of trekking, this time in flat mountains :). Walking many kilometers in the sand of Zandvoor, Noordwijk and Schrool. Schrool was 12 kms up and down dunes, some with 55 meters high. In some places looks like a big desert and finally reach the beach. Awesome place.

Note: In this summits we don't used any crampons, piolet, altitude aclimatation or oxygen tanks :) No one was injured or dead.