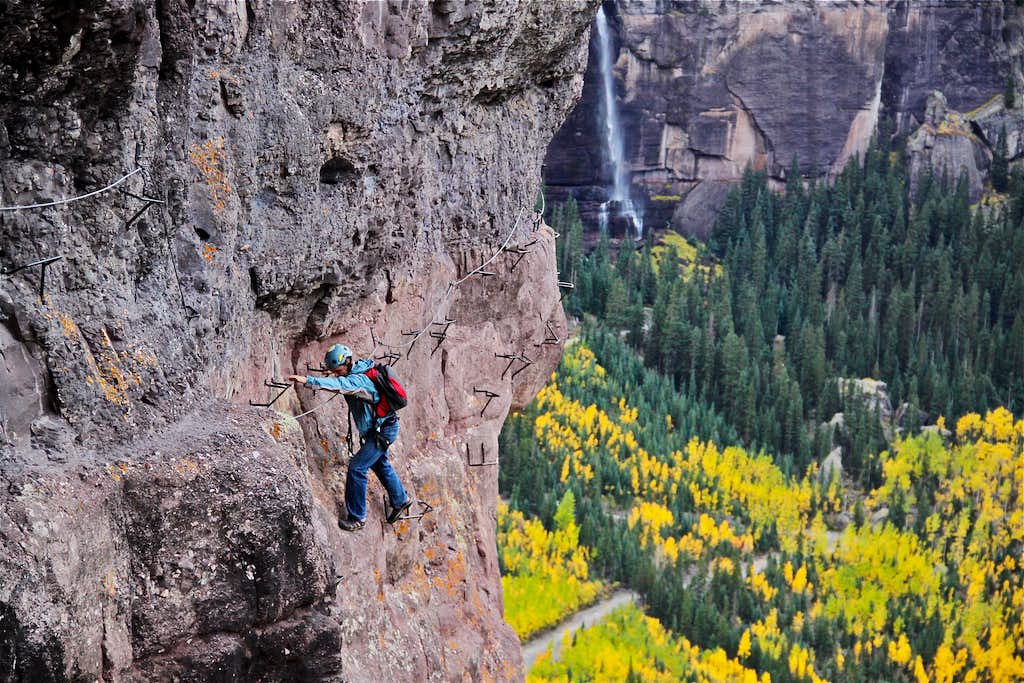 Yes, this via ferrata traverses horizontally.
« PREV NEXT »

Thanks. Fun? I really went up there just to take photos :) haha

What a wonderful wall and ambient: I love also the colour of the tree in background!
Beautiful shot!

Thanks for visiting. You are right, the fall colors here are so pretty.

First, I'd like to commend you on the thorough information on your page and congratulate you on winning POTW. It is nice to see a pic from Telluride on the homepage of SummitPost. Your pictures are amazing and you deserve the honor. However, there are several factors I believe you failed to take into consideration. I am fully aware of the cover photo and article to follow about the via ferrata in Telluride Magazine, which was also very disappointing to see, not only by me but by many people who have had the pleasure of "finding" this once-hidden gem. Not once, however, did that article, or any other for that matter, ever give step-by-step details on how to find it or exactly what to expect. That was part of the adventure: actually finding it yourself at the head of the valley and then figuring out how to access it. Although your pictures are amazing and they definitely do this area justice, I think that they alone would have been enough to tip off its location without directions. Furthermore, I am very confused by the rope tied between 2 members of your group. If either of these 2 were to fall, both would most definitely perish, not to mention the slew of people climbing just below you who you may have fallen on and the fact that you most likely would have dislodged the entire cable system if clipped into it when the fall occurred. I also think it's worth mentioning that doing this in winter would surely be suicide as this route follows a series of avalanche paths very close overhead. I do appreciate you giving credit to this area and its wonderful attractions, but down-playing the potential rockfall onto climbers below, suggesting it be done in winter, failure to mention the crossing of private property and simply the exposure of "Telluride's secret" is inconsiderate. Having done the VF is indeed something to be proud of but I think this is a bit much.

Thanks for your comment. I understand that it crosses private property if you decide to descend towards Telluride, Many people do it in and out, which would avoid that problem. At least if you are coming from Bridal Veil falls site, there is no single trespassing sign as far as I am aware.
As far as the rope between the climbers - they were both attached with their own security system. The rope was for exposed sections of hiking (no cables).
This was not described as a route page, but an article - more information about Kroger than the actual via Ferrata. If I would post it as a route - I would put GPS co-ordinates, length, some kind of difficulty rating etc.
Yes, the rock fall below on climbers is serious (I don't think I was down playing the potential of rock fall on climbers below). I did climb on Pipeline wall below. I did not mention that you can actually access the via ferrata from some climbs, but again this would be route description.
As far as directions, I put a link there, which shows a map and more detailed directions, which I found on the web (that link "here" is not of my production).

I appreciate the response but am still very confused as to how the safety rope would have helped. How would one self-arrest if the other was to fall on the hiking sections? It seems one would just pull the other off as well. Also, although there may not be any no trespassing signs, I have heard several people tell of how they were yelled at and threatened by the people who live at/near the mill. I agree that going out and back from the Bridal Veil side is the best choice, especially since it is well worth doing twice in one go, but not everyone has the stamina or the desire to do so. Furthermore, whether you call this an article or not you give a complete route description including very explicit directions and pictures of each section. I believe your statement "So, Telluride's secret is revealed." really twists the knife for those of us who would have preferred it remain an adventure and not just another day hike here in Telluride. I'm not trying to seem like a angry local...I'm just a bit disappointed that others who have read about your account will not be able to experience the fun of the treasure hunt involved in simply finding it.

Sorry, it took me TWO DAYS to find out what
"Et tu, Brute?" means.

Perhaps this should be discussed in PM-style ?

Seriously? TWO DAYS??? Sorry to have consumed so much of your time with a quote that I remembered from grade school...

Beg your pardon. I must have went to a different school than you did ..

The School of Hard Knocks.

Liba's doing an excellent job on her pages.

Apparently so...I'm familiar with that school as well.(By the way it's "have gone" not "have went".) I never said Liba was not doing a great job. As a matter of fact I commended her on her pictures and the history she provided. This is not intended to be a Liba-bashing session--simply wanted to point out a few things she may not have considered. Take it easy, for crying out loud. No need to "knife" anyone over it.

There's a difference between "constructive"
criticism and being rude simply because you
don't agree with a particular climbing
technique.

I think you already made your point.

Liba's doing an excellent job on her pages."

Seems like you're getting a bit serious now, eh? Did I offend you by not agreeing with your 10/10 vote? I apparently did not get my point across as many people have turned this into a pissing contest and not a logical, civil discussion. Perhaps the name of this site should be changed to Summit Ego since no one can take a bit of criticism for what it's worth....this is not personal but I really find it odd that everyone else is speaking on Liba's behalf. I have never been rude to anyone and I'm so sorry if I came across that way. This is why I swore off SP years ago....it has become more of a Bragging Post than actual valuable candor.

You're most certainly entitled to your own
opinion, but I'm having a hard time discerning
the difference between OPINION and FACT.

Thanks for your apology, and I'm sorry it
took me so long to see your point.

That sounds like a fantastic idea! It's a beautiful day in the neighborhood :)

Quite frankly the lack of thought that has gone into this "article" and the level of incompetency displayed in some of these pictures makes my stomach turn.

yes larry, I would like a double shot of that!

Yeah, no worries, THANKS for the link !

THINK I'll have a couple of these .. 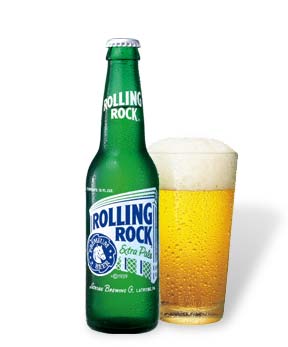