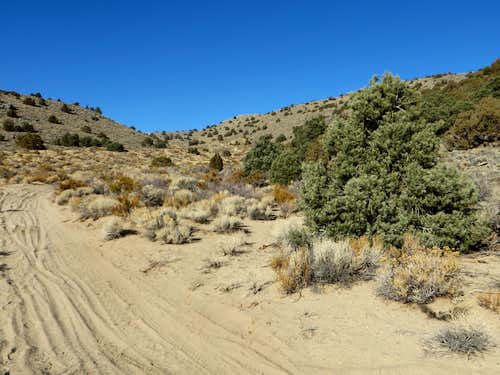 Desert terrain to the summit

Hot Springs Mountain is a stand-alone peak south-southeast of Carson City, Nevada. Separated from the Pine Nut Mountains by a valley, it offers a 360 view of surrounding mountains, including spectacular views west, northwest, and southwest towards the Sierra Nevada Range.

Located adjacent to the travel artery between Northwestern Nevada's population centers, Hot Springs Mountain is far from a remote desert summit.  While not typically crowded, hikers trek to the summit on a fairly regular basis.  There are numerous homes at the base of the southern slope of the mountain. 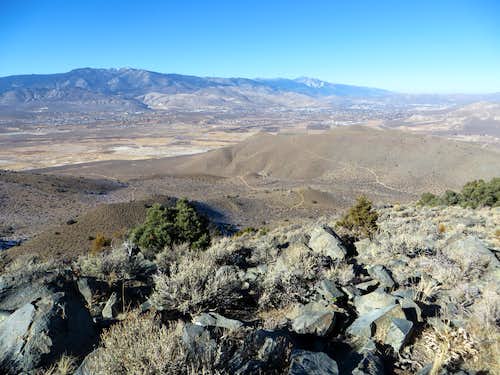 Either approach has a road to the summit. While the roads are steep, and the terrain sandy, it is rather straightforward for a short 2 hour hike, perfect for colder weather months.

Hiking Hot Springs Mountain is recommended between October and April. Late spring and summer months are far too hot. Avoid this mountain in wet conditions. Sandy terrain gets muddy and makes for difficult terrain getting up the mountain. Snow is more amenable, but isn’t as regular an occurrence, particularly at the access points from the west and south, which get more sun than north and east facing slopes. 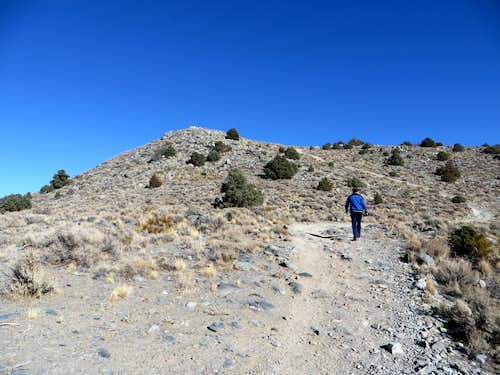 For the western approaches, take Stephanie Way for about two miles and take a left (north) on Vicky Lane. From Vicky Lane, there are two starting points. The direct west approach starts about a mile and half up the road, and about a quarter mile past the neighborhoods. Park at a dirt road on the right at about 4,744’. Head directly east for a little under a mile. You gain over 700’ and reach a T-junction. Take a left (north) and head a couple hundred yards up. Then take a right (east) and head up to the summit. The total distance is only about 1.5 miles one way, with an elevation gain of a little over 1,200’.

If you want a more gradual hike, you can approach from the northwest. Continue past the neighborhoods for about a mile (two-thirds of a mile north of the direct west approach). Park at the dirt road on the right at about 4,714’. Head directly east for a little under a mile. You gain about 500’ and reach a T-junction. Take a right (south) and walk a little over half mile, then take a left (east) and head up to the summit. The total distance is about two miles one way, with an elevation gain of a little over 1,250’.

Another primary approach is from the south. Take Stephanie Way for 3 ½ miles and turn left (north) on E. Valley Road. Walk about a half mile up to the base of Hot Springs Mountain. Take a quick right and park at a dirt parking area.

Walk back towards E. Valley Road, and head north up a steep dirt road. Continue up the road which goes straight north, then winds to the left and then back to the north. There are lots of side roads, but just stay on the main road until it crests at about a quarter mile from the obvious summit. The road is pretty sandy, making it a little tougher going than if the road had better grading. But it is still an easy summit to reach if wanting a simple day hike. 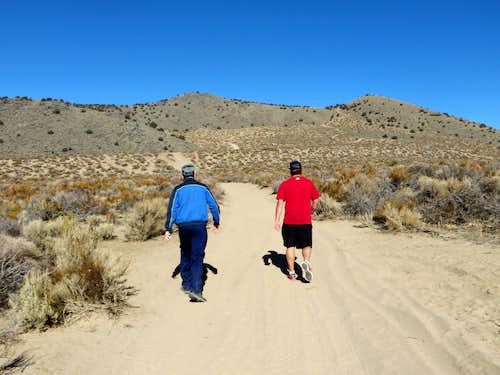 Starting up the road from the south approach 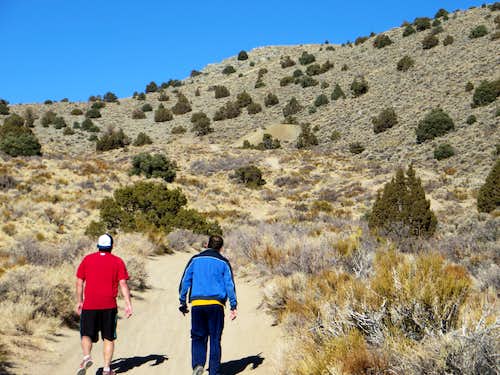 Looking up towards the summit from the south approach

From this route, the elevation gain is 1,050’ with a round trip hiking distance of about 3 ½ miles.

There is no red tape on Hot Springs Mountain. Make sure to park on public lands, and not in the neighborhoods. Respect private property nearby. The mountain is accessible 24/7.