Huachuca Peak is a high prominence peak in the Huachuca Mountains near the town of Sierra Vista in the South-East corner of Arizona near the border to Mexico. The peak lies within the Fort Huachuca Military Reservation and requires a visitor pass to access the mountain; see below the "Red Tape" section. The mountain does not appear to be climbed frequently based on the summit log and a lot of entries were actually from soldiers of the base. Huachuca Peak might be of interest of peakbaggers trying to complete certain prominence lists as it has 1910 ft of clean prominence earning it the 84th spot on the Arizona prominence list.

The peak also offer a large variety of flora with large sycamores near the trailhead and pine and oak trees higher up as well as grassy meadows. Additionally, we saw a small rattlesnake on our decent, which, based on pictures on the internet, could be identified as a banded rock rattlesnake as well as some deer. We also saw quite bit of bear scat on our hike and large cats probably live in these mountains too. 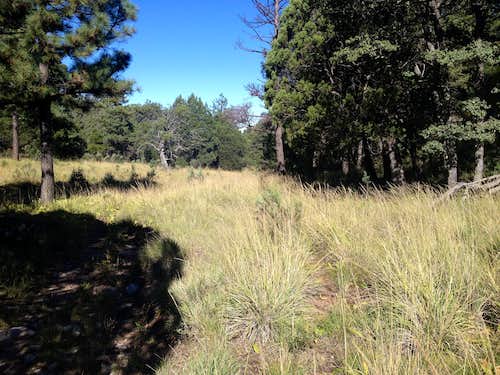 Pine Park - a beautiful meadow along the ridge trail

From Tucson follow I-10 E to AZ-90 S in Benson and take exit 302 from I-10 E. Follow AZ-90 for about 27 miles to the intersection with AZ-92. At the traffic light turn right onto Hatfield Rd and reach the Van Deman Gate (open 24 hrs) after 2 miles. To get to the trailhead in Huachuca Canyon follow Hatfield Rd and the turn right onto Smith Rd. Go straight at the roundabout and then turn the second street left onto Christy Ave which converts into Hines Rd and then eventually into Huachuca Canyon Road as you leave the actual military base; at that point the road turn into dirt. Drive for another 1.5 miles until you reach the small campground; any vehicle should be able to make it here under normal conditions and careful driving. Beyond the campground the road gets much rougher and would require a sturdy 4WD vehicle with which you could proceed another 1.5 miles. We chose not to do so since the driving would have been that slow that you might as well walk it. 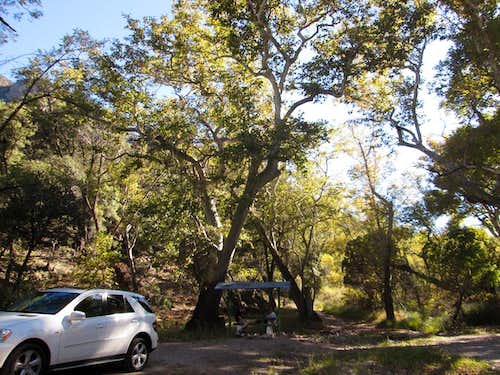 Relaxing after the hike at the campground/trailhead (photo by surgent)

The mileage and elevation gain given here is calculated from the campground. The entire hike was on old jeep roads or trails though sometimes a little overgrown or faint in places, the route was generally straight forward and easy to follow. Hike up the Huachuca Canyon Road from the trail head and stay on the main road (stay right) at two minor junctions; this should be obvious. The initial grade of the road is fairly gentle and not much elevation is gained. After 2.3 miles you will come to a major Y-junction; turn right here. After another mile or so you will come to a saddle which offer expansive views in all directions. Turn left here and follow the ridge trail along the ridge in South-East direction; this is the first time you can clearly see Huachuca Peak in the distance. After another half mile or so you will come to a sign saying “Huachuca Peak 2 ¼ mi”; continue to follow the ridge trail which is now just a small path and generally stay on the left sign of the fence marking the border of the military reservation. As you follow the trail you will come up and over two hills along the ridge gaining and losing some elevation in the process. At a low point before the final ascent to the peak you will come to a junction with the Huachuca Canyon Trail turning off to your left as you hike up; this is the trail we later used for our descent. Continue up here on the ridge trail. 2 miles from the saddle a smaller spur turns off to the right which is the trail to the summit of Huachuca Peak. Pay attention to this as there is no sign at the actual trail junction, however you will find a sign a couple of hundred feet in around a bend which cannot be seen from the turn off. Follow this trail for 0.25 miles to the top; the trail is faint in places but it should generally be clear where you have to go. At the summit you will find a register in an ammo box, a benchmark as well as a plaque. The summit offers spectacular views in all directions. 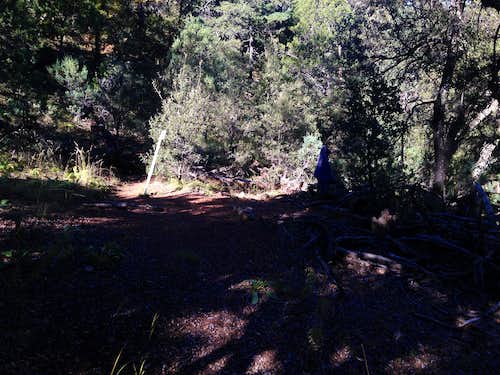 Junction with the Huachuca Canyon Trail

On our descent we followed the ridge trail back to the trail junction with the Huachuca Canyon Trail; we turned right here and followed it down. This trail is quite steep in places and at one point you are hiking above a dramatic drop-off. Eventually the trail ends on a minor jeep road; turn left onto the road and follow it for another 200 yards until you come to a junction with the major Huachuca Canyon Road. Turn right here and follow the road for roughly 2 miles until the reach the campground.

Below are our statistics:

The map below marks the route we took (courtesy by surgent): 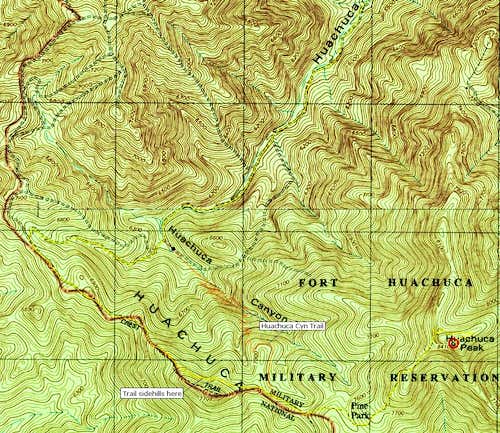 Huachuca Peak lies within the Fort Huachuca military reservation and hikers are required to obtained a visitors pass at a barrack right at the main entrance gate. You are required to show a valid US drivers license and fill out a 1-page form. We were not asked to show vehicle registration or proof of insurance though it is listed as required on the Fort Huachuca website. The whole process didn't take more than 15-20 minutes and no fee was required.

Huachuca Peak can be climbed year round, however you would have to deal with afternoon thunderstorms in July and August and the Huachuca Mountains do get snow in winter. The best time to climb would be spring and fall. When we climbed the peak in late October the temperatures in the early morning where crisp with high 40s and very pleasant on our return in the afternoon with high 70s. The majority of the climb is actually shaded so snow might linger longer in winter but your are protected from the sun in summer.

There is a small primitive campground at the trailhead though it is not very big and doesn't have too many flat spots but would suffice for car camping. There is no water or other amenities except two small ramadas with picnic tables and benches. There are plenty of lodging options in the nearby town of Sierra Vista. 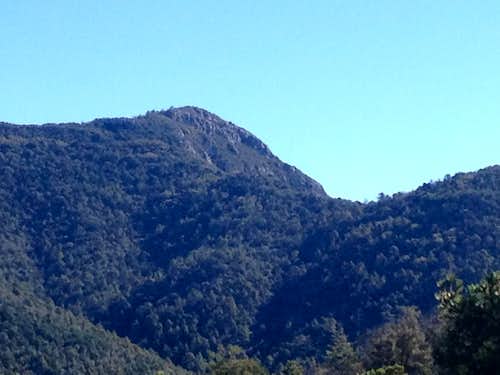 A View at the peak from further down