As a high altitude peak, the climb starts before sunrise so we headed on Friday afternoon to the refuge to get some rest beforehand. Rainy season usually ends in April but it has been raining a lot this month of May. Once we arrived at “La Virgen” parking lot, it started pouring and we had to wait an hour in the car. From “La Virgen” parking lot, there is a 2 hour hike up to “Nuevos Horizontes” refuge, the oldest mountain refuge in Ecuador.

Nuevos Horizontes Refuge (Picture taken the weekend before when I climbed Illiniza Norte).

We arrived at the refuge at 8:30 pm, had some potato soup and chicken with rice. People can bring their own food and cook it at the refuge but we decided to eat there in order to lower the weight of our backpacks. After preparing our gear and backpacks, we hit the bed in our sleeping bags. I only managed to get a couple of hours of sleep and woke up at 4:00 am. After some hot tea with bread, we were on our way to climb Illiniza Sur. It takes about forty minutes before reaching the glacier/wear crampons. This initial part of the “normal route” has high possibilities of rock fall so our guide recommended us to move fast.

Just before the glacier part of the climb

The day seemed to be with good conditions and at sunrise we had beautiful views of Illiniza Norte. The first snow/ice ramp was of 50 – 60 degrees. It was particularly tiring to start the glacier section with this kind of effort and I used different climbing methods like the “French technique”. After this part of the climb which seemed long, we passed through a hidden crevasses section where falling was not an option. During the last part of the ascent, clouds began to emerge but winds where relatively low. I could still see the summit and at this point, I was too tired to think straight. My focus was on taking every step slowly.

When I started climbing almost a year ago, I had a special respect for this mountain. It’s no place to learn. It’s no place to make mistakes. It can be dangerous and has proven to be fatal. Standing on the summit of Illiniza Sur was my biggest mountaineering accomplishment yet. It’s no small feat. I was tired but happy. The descent of every mountain is where most accidents happen. Usually it’s the most difficult part of the climb. I knew that it wasn’t over until we got back home safe. 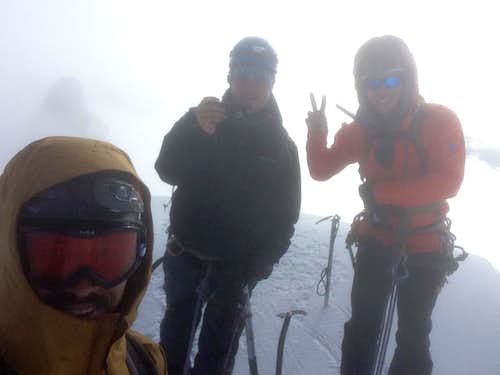 Half of the climb completed