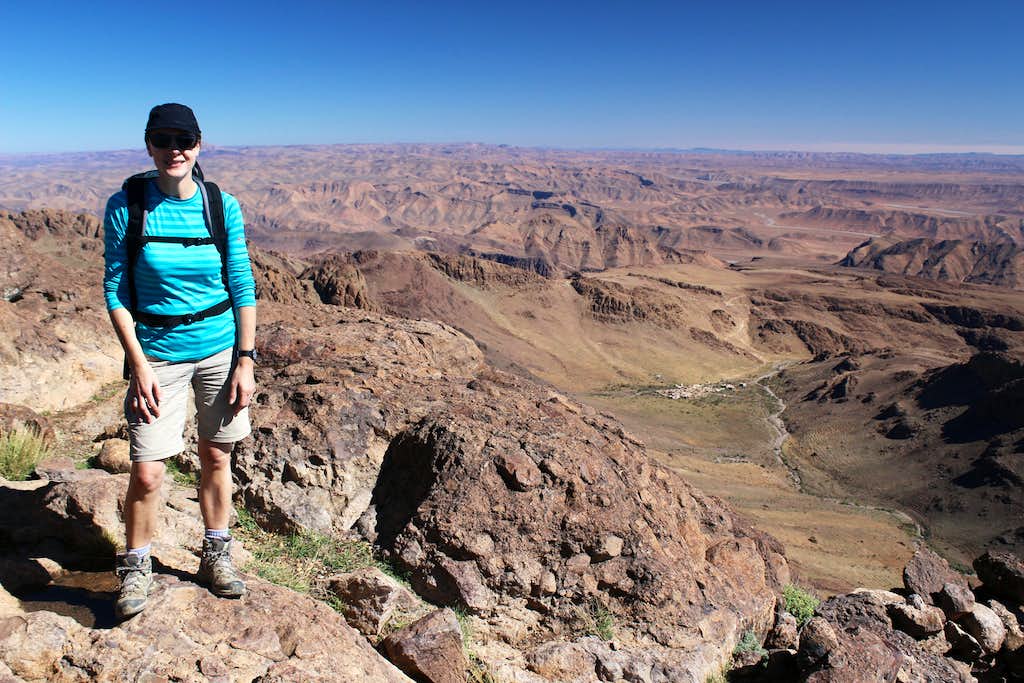 Some sources credit Jebel Aklim (2531m) with being the highest peak of the Anti- Atlas. However, Jebel Siroua (3304m), the remains of an ancient volcano lying at the NE edge of the range, has this accolade.

The base rock of north Africa was formed during the Pre-cambrian era approximately 4,500 to 550 million years ago.

The formation of the Anti-Atlas range itself originated inthe Paleozoic era (300 million years ago), as a result of tectonic plate collisions.

More recently, (about 2 million years ago) the rock was uplifted as the land masses of Europe and Africa collided to the south of Spain to form the mountains.

Erosion over the intervening years reduced the Anti-Atlas range so that today it is lower than the High Atlas mountains to the north.

The rock on Jebel Aklim consists of outcrops of Quartzite mixed in with sedimentary and shale deposits. The buttresses which rise above the settlement of Tagdicht  appear to be largely made up of conglomerate rock as does the summit of Jebel Aklim.

The terrain around Jebel Aklim is rocky and quite barren although there are patches of greenery situated alongside the many small settlements usually based around a water source. We met no other trekkers during the week we were in the area and few locals outside of their home ground.

Ascents can be made as a trek over several days from the town of Igherm or as a one day trek from the nearby settlement of Tagdicht (further east.). 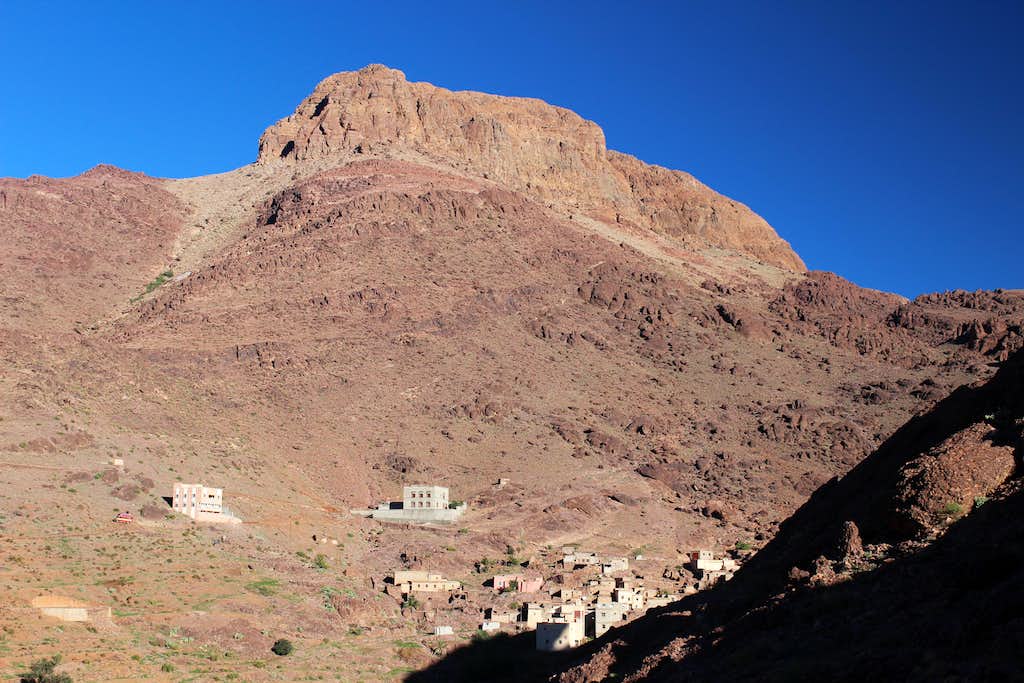 From Agadir, eastwards on the N10 to Taroudant takes approx. 1 hour 30 mins.

From Taroudant,southwards on the R109 to Igherm takes approx. 1 hour 30 mins.

It is a 3 day (or longer if you prefer) round trek from Igherm to Jebel Aklim and back.

Or, for a 1 day ascent, hire a 4wd for the ongoing trip from Igherm by road and dirt track to Tagdicht.

A quick internet search shows there are at least 3 different towns called Tagdicht (or Tagdichte) in the mountains of Morocco.

This one is situated close to but to the north east of Amal in the Souss – Massa region. Jebel Aklim is east of here.

For this leg of the trip:

These are rough dirt tracks so navigation may be a problem and the tracks may not be in a great condition!

Guided trek vs Self guided trek 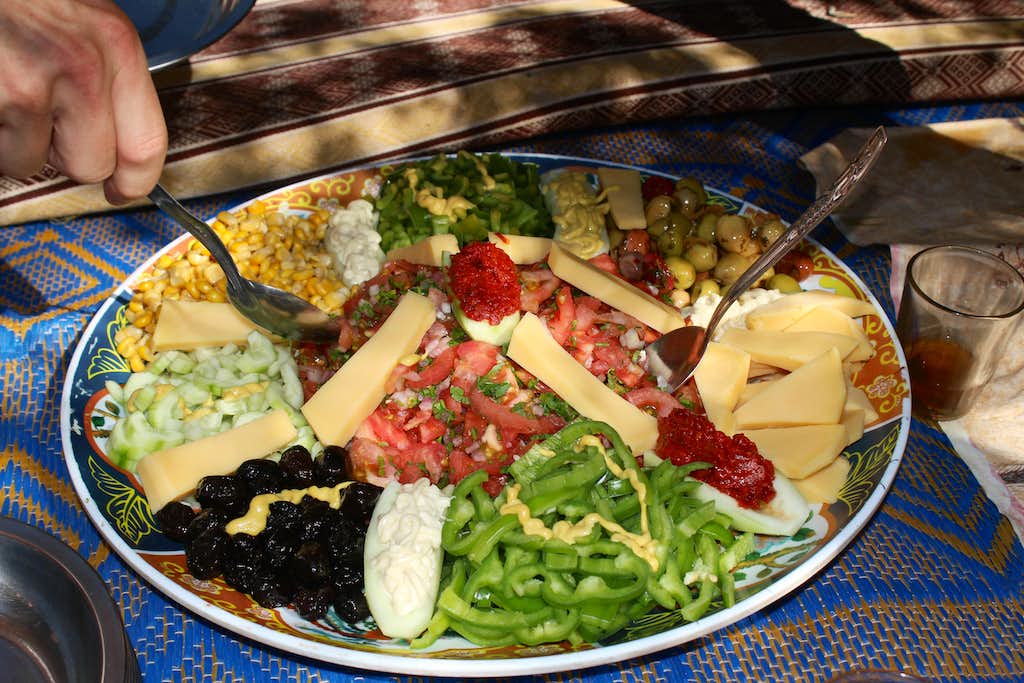 With a 4wd to take you from Igherm, It’s possible to make the ascent of Jebel Aklim from Tagdict and return to Igherm within a day.

The mountain itself presents little in the way of difficulties, assuming the weather is good and you have a map, route finding is not too difficult.

For those who would like the “trekking experience”, it’s possible to trek from Igherm using a guide with backup support.

These trips can be booked before you travel (there are many UK based companies offering this trek) or from local guiding organisations in Morocco.

Whilst this is obviously more expensive than doing it yourself, it removes the need for car hire (and driving), it puts the navigation of the many dirt tracks in to the hands of the guides and avoids any potential conflict with locals if you want to camp or park on their land – we used a local farmers “threshing platform” for the tents.

Also, it puts money back into the local economy in the form of employment and supplies purchased and in my experience, the freshly prepared food provided by the outfitters has always been excellent. 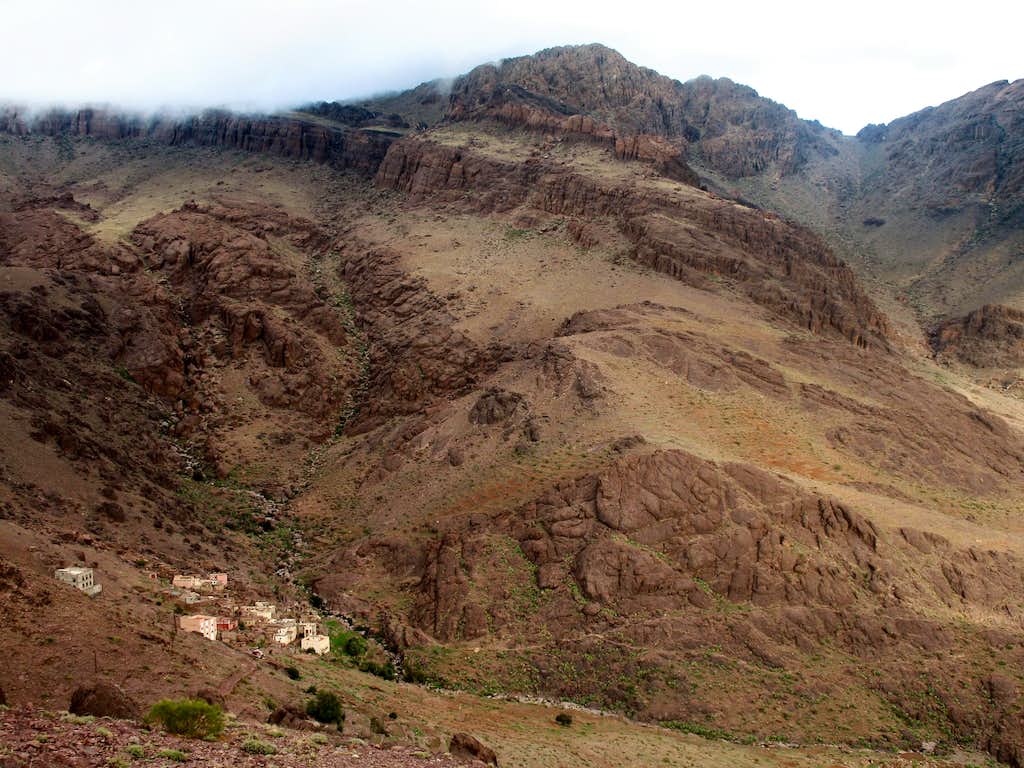 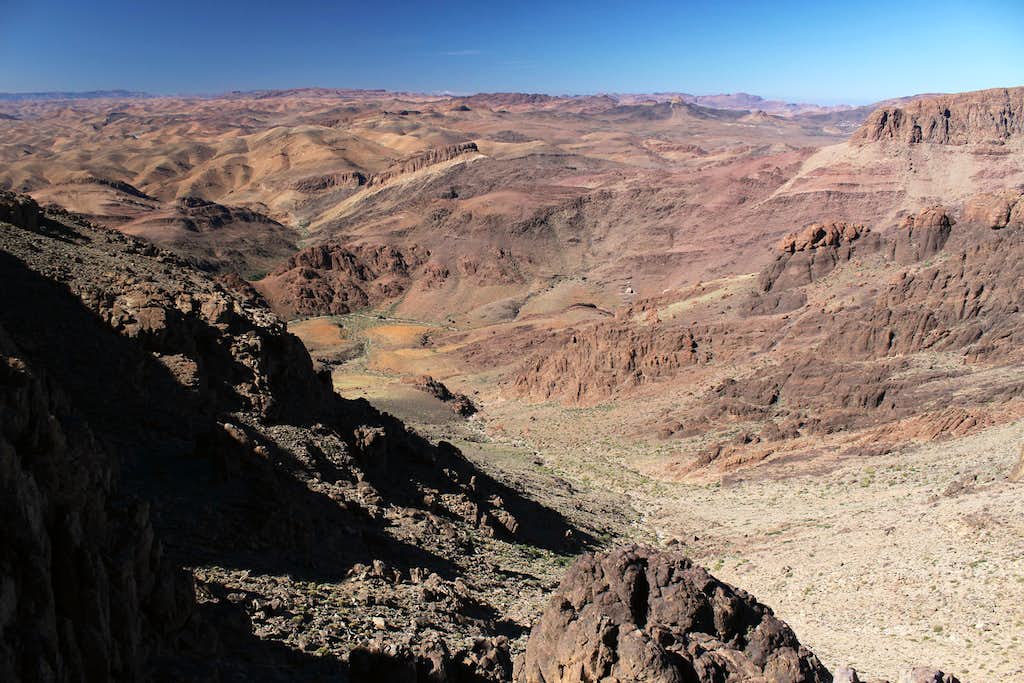 The pass from Tagdicht over to Tagragra further east, is clearly visible from Tagdicht and this is the main route towards the summit.

Descend to cross the river then follow it southwards on a faint path until it’s possible to turn left (eastwards) up towards the obvious pass. The path here varies from obvious to non – existent but it is never very steep so it should be easy to navigate in clear weather. The ground under foot is made up of lots of scree and other broken, shale rock with little vegetation so it’s possible to wander off and back onto the “path” without too much trouble.

As the route ascends there are great views behind you across the barren landscape to the west and south.

The pass itself is at first, quite rocky but then opens out into some flatter areas before it drops down eastwards following a small river towards the settlement of Tagragra.

The summit of Jebel Aklim is to the north east of the pass on a rocky “spur”. Make your way across the even terrain, following the easiest line – again, the path is rather vague!

The summit rises up on an outcrop of rock and (at the time of writing) has a broken, rusty metal tripod to guide you near the top. There is a large summit “cairn” that commands fantastic desert and mountain views in all directions.

To the north, the snowy tops of the High Atlas immediately draw your attention lying approximately 100 miles away.

The view west looks back to your ascent route and to the east and south you can see first of all, the settlement of Tagragra, then mile after mile of rock and sand ridges and in the distance to the south, you fancy you can see the Sahara desert!

To descend, retrace your steps back to Tagdicht. 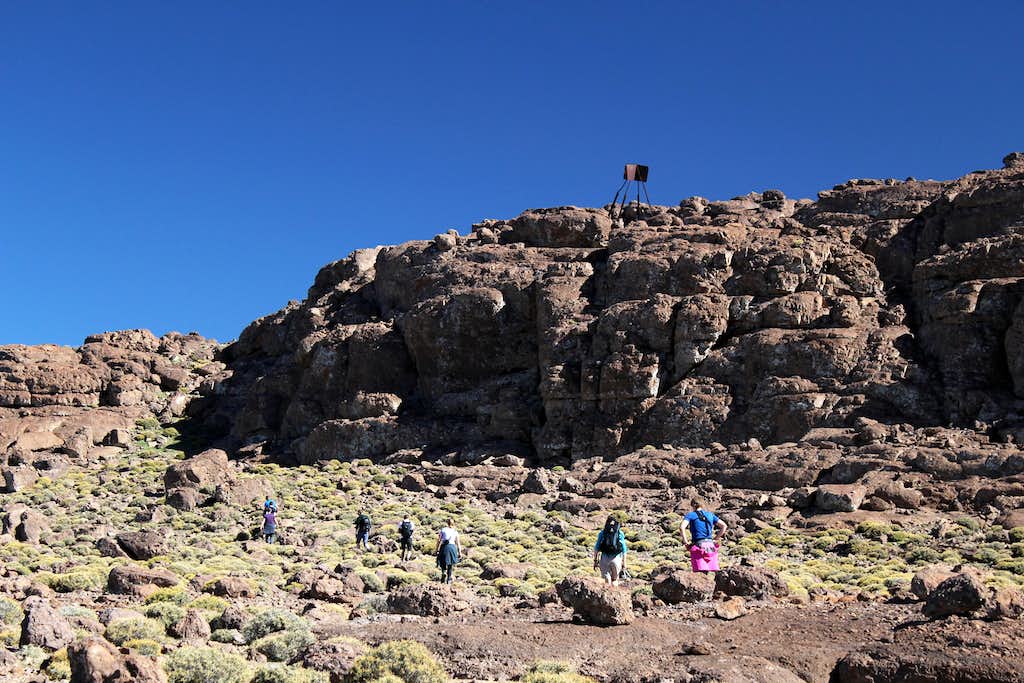 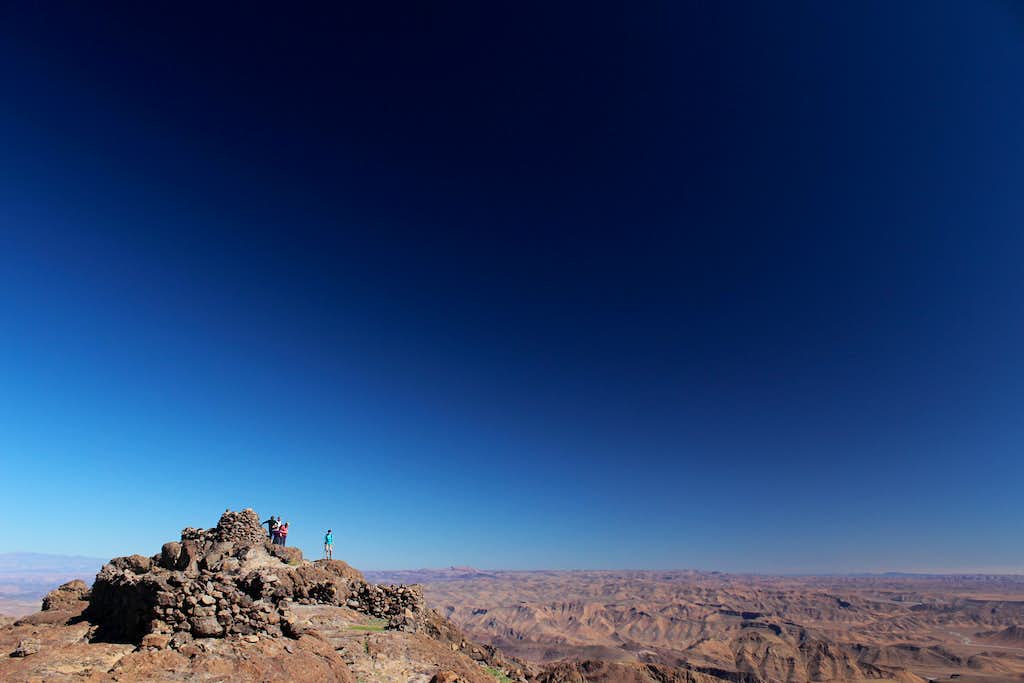 Day 1 - Trek from Igherm to the north east, passing on old copper mine, the settlement at Amal and onwards to Tagdicht.

Day 2 – Ascend Jebel Aklim and descend eastwards to a campsite above the village of Tagragra.

Day 3 - Southeast to Irtem then, west following a river valley to a campsite near the village of M’Dint.

Day 4 -Westwards towards the village of Ighir n Tizgui, then follow the course of the river northwards to a campsite by a branch in the river and some rock pools.

Day 5 –Follow the dried up river bed westwards to the olive groves of Anammer and drive the short distance back to Igherm. 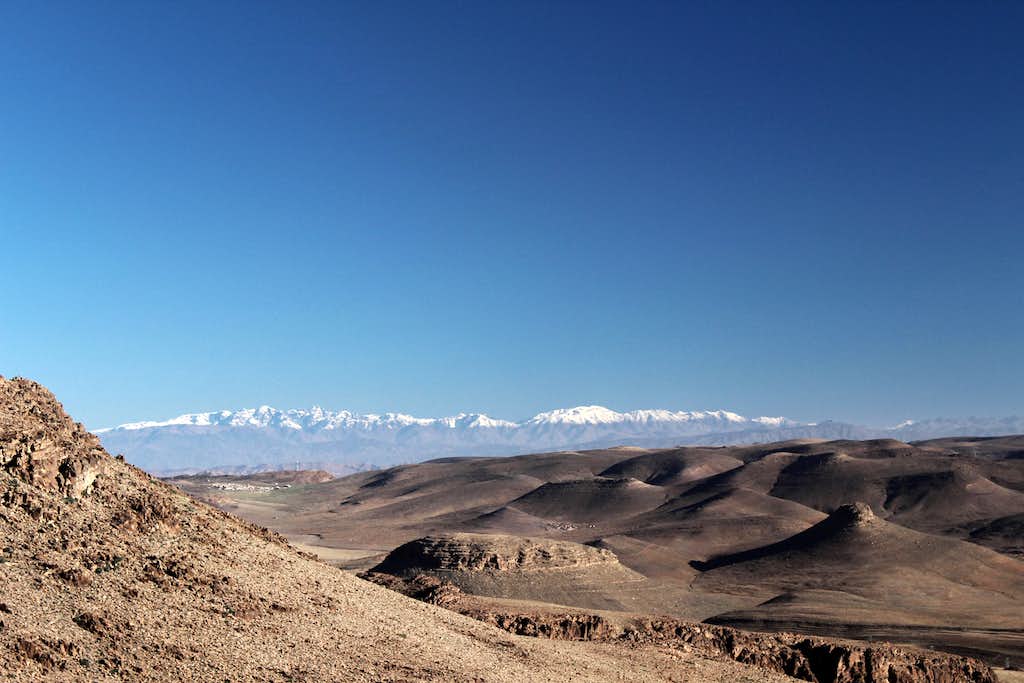 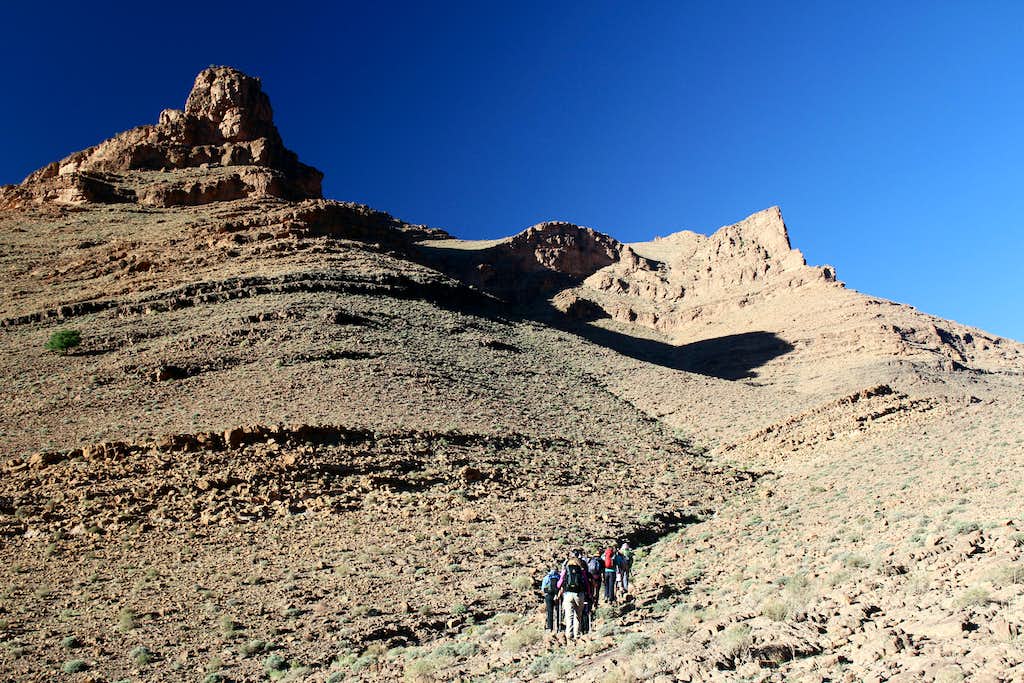 Spring or Autumn as Summer is too hot.

Generally, the weather is sunny and quite warm – not surprising considering the close proximity to the Sahara desert - the area is considered to be part of the Saharan climate zone. However, when we arrived at Igherm (in November) we had 24 hours of rain that would rival anything the Lake district or North Wales could muster! 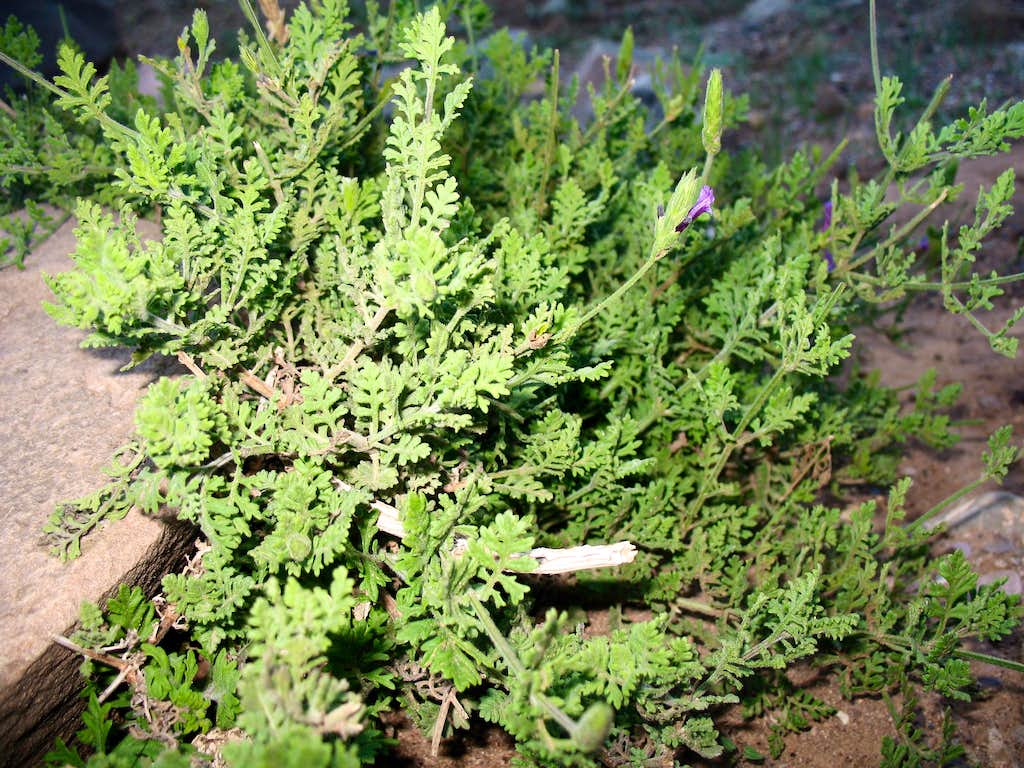 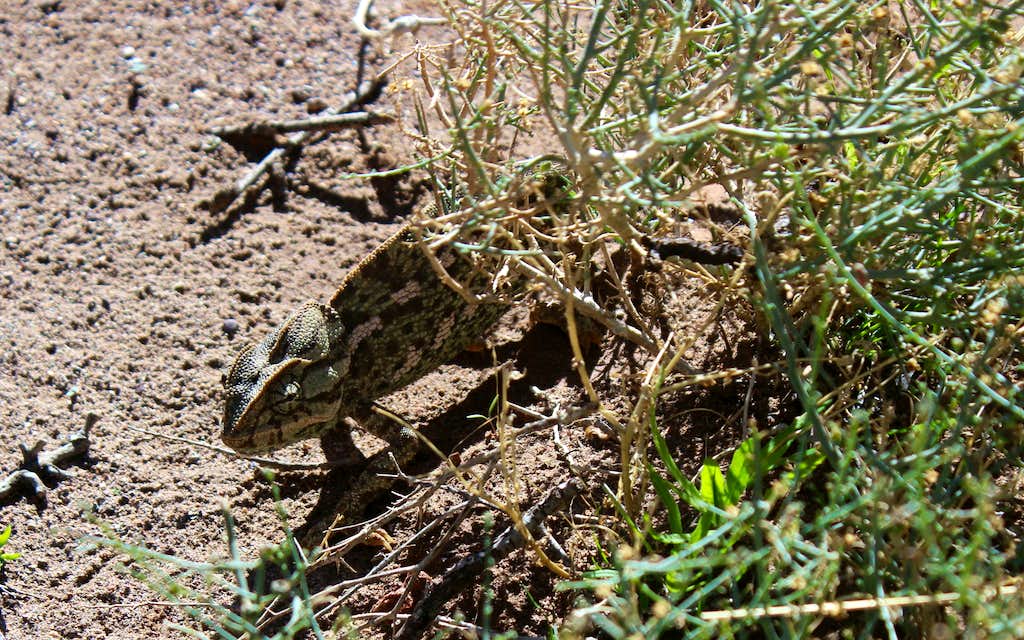 Being a semi – desert area, the natural vegetation is quite sparse. However, plants that like sun and require low amounts of water to grow will be seen. Wild Lavender, Rosemary, dwarf palms and Thorn bushes grow amongst the rocks as do other alpine plants. Prickly pear cactus and Euphorbia are common in some areas.

There will be Argan trees (possibly with goats climbing in them) and Olive trees, both grown for their oil.

Around the villages, other crops may be grown depending on the presence of irrigation channels.

As well as the aforementioned goats, sheep and camels are often seen as well as the more obvious proliferation of insects and reptiles. Foxes and Jackals are mainly night time animals that keep out of trekkers way.

Morocco is reputed to have an interesting bird population but the only birds of any note I saw were Kestrels (I think) amongst the rooftops of Taroudant. 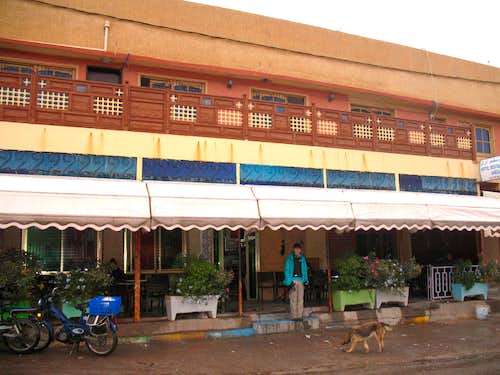 No official campsites – camping will need to be negotiated locally. 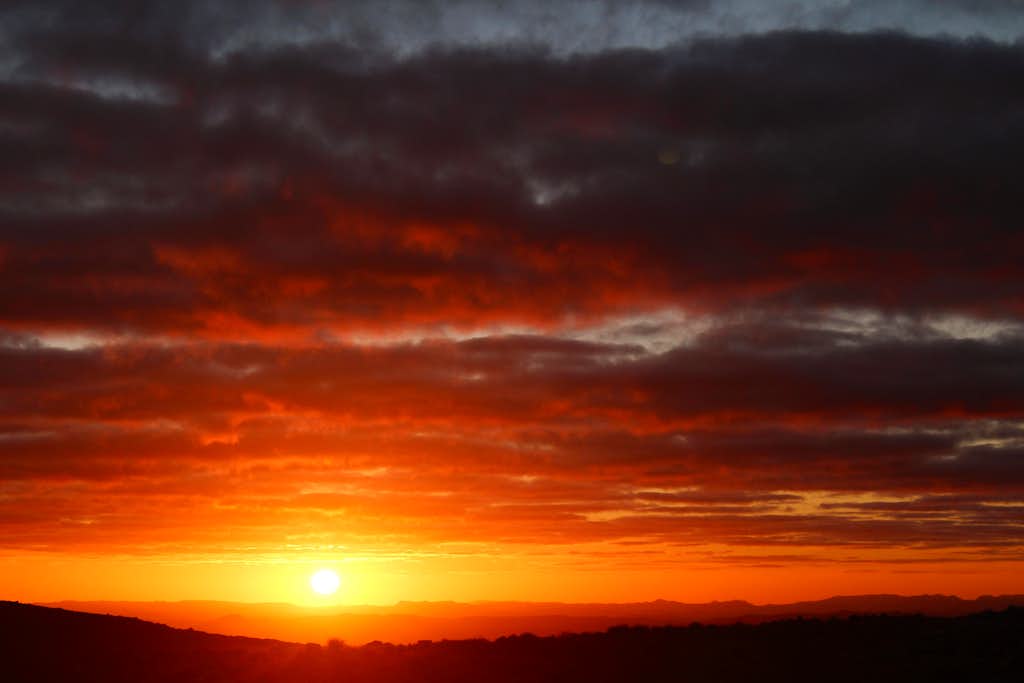