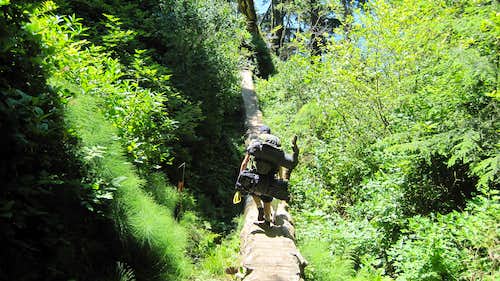 This was my first time doing this full hike from the China Beach trailhead to Botanical beach. I really like hiking the trail from south/east to north/west because the last stint of trail from Sombrio to Botanical is fast and easy; thus, easier on tired legs. We took two nights to complete the trail.
My girlfriend drove to my house in Victoria from Campbell River and we loaded up our two separate vehicles. I loaded up my dog Mr Sparks for the very first time. I had just adopted him the week previous and this was going to be a thorough test of our new friendship. We then headed towards Sooke, all the way past Jordan River to the Juan de Fuca marine trail. Before we started hiking we drove to drop off a vehicle at the north/west end of the trail so that we would have a way of getting home. By the time we arrived back at the China Beach trailhead and started hiking it was just after 1100.
The first bit of this trail starts out rather easy. It is not very steep and there is minimal mud. We arrived at Mystic Beach, or the 2km mark, after walking down some twisty switchbacks that ended with a giant log stair case down to the beach. There is a picture of this displayed above. The beach itself is very pretty and had quite a few people camped along it. We arrived here around 1145. 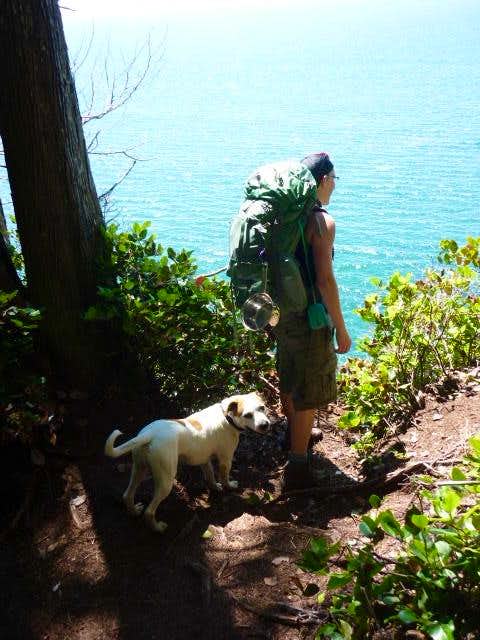 Lookout from the trail
After Mystic the trail became much more up and down, and a little more muddy. The trail hugs close to the ocean and occasionally we would pop out at a beautiful lookout.
At about 1400 we arrived at the east end of Bear Beach, which is 9kms in. As we were walking down the beach Darryl and I realized that the dog was no longer following... So we looked back and called his name. After a few minutes he came barrelling down the beach towards us covered in blood! I was alarmed and thought he must have been attacked or fallen when I was not paying attention! However, the closer he got the more I could smell the strong stench of old dead animal... He had been rolling in a dead sea creature... And we were going to have to share a tent with him...
We continued on and camped at the west end of the beach by a neat rock that sticks out of the ocean. We set up in the woods behind some big logs and I eventually dug through my bag to find some dish soap and gave my new skunk of a dog a bath... 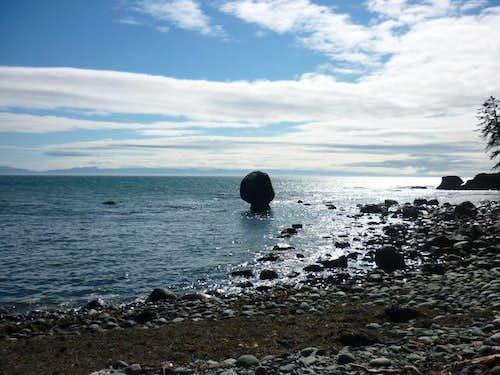 That afternoon we noticed some teenagers arrive at the beach in flip flops and carrying beer... I was a bit stumped as to how this was possible. Eventually I came to the conclusion that they must have found a trail straight from the highway, which is never more than a few kilometres away throughout the duration of this trip. I once did the same thing north of Chin Beach in order to get out of a group hike a day early. 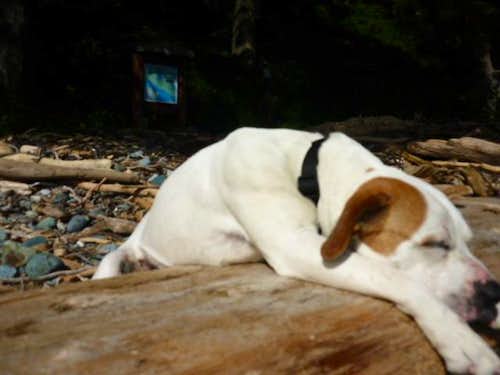 The next day I knew we were up for a challenge ahead. This is the roughest section of trail and I wanted to make it to Sombrio Beach for the night. The trail in this section is constantly up, down, muddy, and slippery. Even in August there tends to be mud in the low areas... It is pretty hard to get through this section without at least one wipeout. There are many slippery logs that make balancing with a heavy pack very difficult. 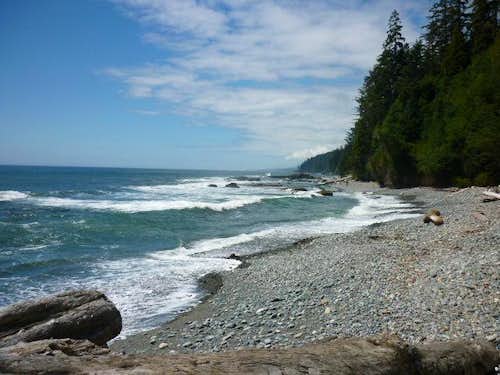 Chin Beach
We emerged from the muck onto Chin Beach, or the 21km mark, at 1100. We scoped out the emergency cabin and laid on the rocks below for about 45 mins or so. I believe I even fell asleep briefly. We then headed up the beach to a section that was a bit hard to pass with the raising high tide. We took off our boots and hiking socks to brave the waves lapping against the rock wall, carrying the dog who is a reluctant swimmer.
The next section of this hike starts out like the rest: up, down, muddy, slippery... After a short period we ran into a cool extension bridge at Loss Creek. This was a real test of my dogs bravery. He made it across unscathed. 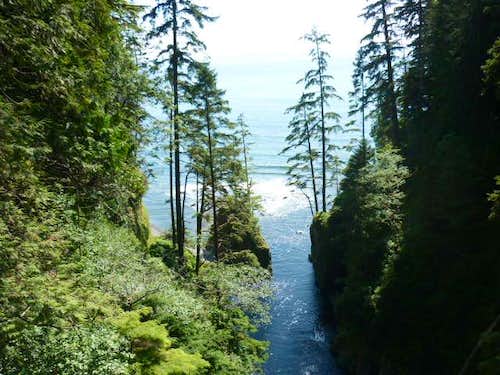 View from the extension bridge at Loss Creek 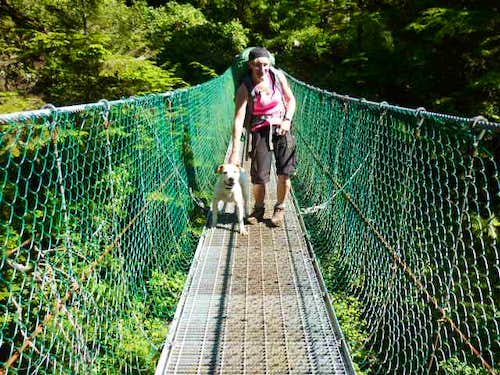 The extension bridge and Mister getting encouragement

A short while after the extension bridge the trail turns into an old road. This is a very nice, fast section of trail. Just enough to pick up our spirits and push us on to Sombrio.
We arrived at Sombrio Beach at 1430 and camped at the east end of the beach for a couple of reasons: the beautiful sand which allows for beach camping, close access to a second bathroom, our feet were tired and couldn't make it down the beach, and all the cool kids were doing it. We pulled the hiking boots off our old sore feet and put on bathing suits to soak up the sun. 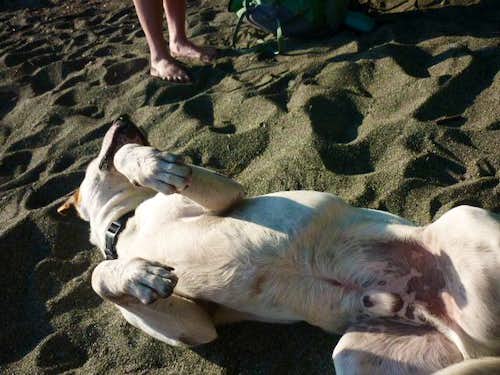 One of the reasons I love hiking so much is meeting great people along the trails. That night we met quite a few. After we had made some dinner and started to mix some vodka lime drinks (I pack stolichnaya vodka and mix lime crystal light with pumped water) a couple of ladies from a camping spot next to us came over and started attempting to hang a food cache from a large tree hanging over the beach. We watched them struggle for a while and then asked if we could be of help. This became a fun game of tying a rock to their rope and attempting to hurl it over a lonely branch about 15ft up the tree. Eventually Darryl had success! To celebrate we scraped what little wood we could find around the beach and shared a fire with the girls. It turns out my friend Darryl and the one gal were both from Campbell River.
Eventually these girls got tired and wandered off to bed; however, a couple of boys joined us from further west down the beach. They were both in a band called "Fins Out." We had a good long chat about music, since at that time I was lead guitar in a band as well.
Our fire started to fade eventually and some boys walking by suggested that we burn some of the old dried out kelp along the beach. We thought this might be a cruel and stinky joke so we only burned one small piece... It worked and created long lasting, hot coals!
After a while we became jealous of the helpful kelp boys from further down the east part of the beach. They were loud and we caught the glimmer of beer cans in their hands... A tasty treat not often packed in large quantities by hikers... So we ditched Fins Out and headed to kelp boy's fire. Turns out they were a stag from Vancouver with great music, good conversations, and a giant barrel of beer they packed from the parking lot. Did I mention they shared the beer? Success.
At the end of the night we sauntered back to our camp and laid in the sand. There was a magnificent meteor shower that night and we watched yelling "oooh" and "aaaaww" for quite some time before settling into our tent. 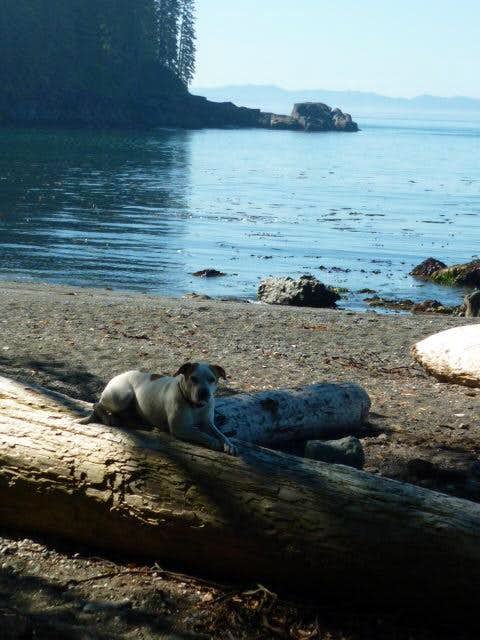 Mister in the morning on Sombrio

Because of all the fun we had the night before, we did not get the early start we planned... Did I mention we had someone coming to join us for the last leg of the trip? They ended up waking us up alarmingly... Probably a good thing too or we might have slept all day... We quickly packed up, brought our heavy bags to the car in the parking lot, and carried on with light day packs. I believe we started hiking again at 0930.
The last leg of our trip was a breeze. Our newly joined hiking partner had fresh long legs, and we found that we were jogging to keep up at some points. That didn't bother us! It felt good to be free of our heavy packs and hiking on flatter ground. In fact, this part of the trail has minimal elevation gain or loss. 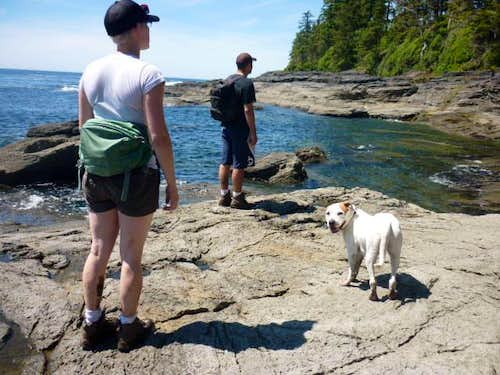 At 1355 we finally arrived at Botanical Beach. Our hangovers had been sweated out hours ago and we were at the finish line! What a great hike. It is one I can see myself coming back to for years and is a great one for those just getting into hiking.

I'm not sure why you've listed the location as "Alaska, Canada, North America."