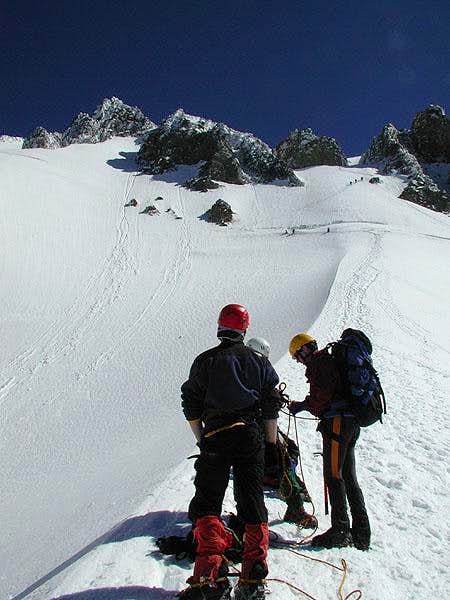 July 01, 2001 Mount Hood Climbing Accident (part 1): Around 9:30am I was descending (at the first switchback from the bottom) when the climber behind me (near the second switchback from the bottom) slipped and fell about 300' into a crevasse / fumarole. It was scary watching him fall head-over-heels, out of control down the slope. He lost his axe during the fall and people were yelling at him to "dig in with your heels" as he fell. He wasn't able to self-arrest but eventually he tried to steer himself and ended up in a crevasse (very lucky). Even before I made it down to the foreground (when photo was taken), we had people calling 911, however the first official rescue staff (a USDA FS climbing ranger) wasn't able to make it for 4.5 hours. Accident Photo Sequence: [ 1 | 2 | 3 | 4 ]
« PREV NEXT »

Good info John, lousing the ice axe is a big risk that need to be avoid