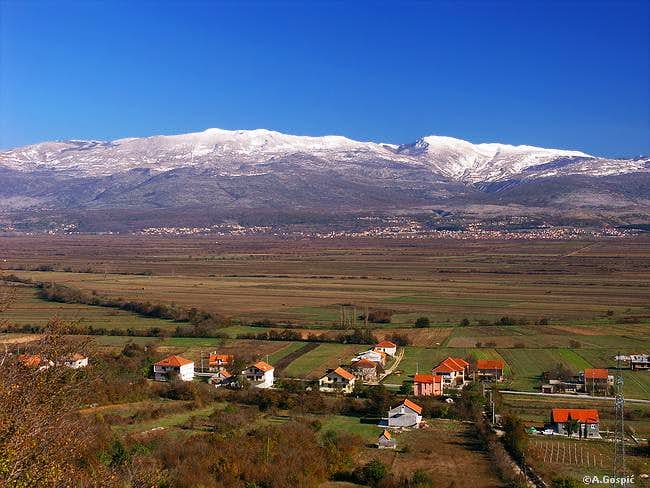 Kamesnica (1855m) is SE most group of Dinara massif. This is the Croatian side of Kamesnica with huge Sinjsko Polje (Field of Sinj, around 300m). Border with Bosnia Herzegovina goes bit below the main crest on Croatian side so peaks belong to Bosnia, which is non sense that remained from past times when occupying Venetians and Turks determined the border between Turkish Bosnia and Venetians Dalmatia. At the foot of the mountain, on the other side of the field, houses in Gala and Otok are visible. In left part highest peak is Garjeta (1773m), right of the middle is Kamesnica (1809m) while highest peak Konj (1855m) is far right, barely visible from this angle.

than Velebit- less architecture even though it is a bit higher

Yes Mark, among Dinarics Velebit isn't that high but its architecture is much more complex and massif so diverse that most massifs in huge Dinarics chain can't even compare. For example Kamesnica and whole Dinara are bit higher than Velebit but are ridge mountains mostly with two simple sides. When you look real altitude from the foot then Velebit is higher because sea is its foot.