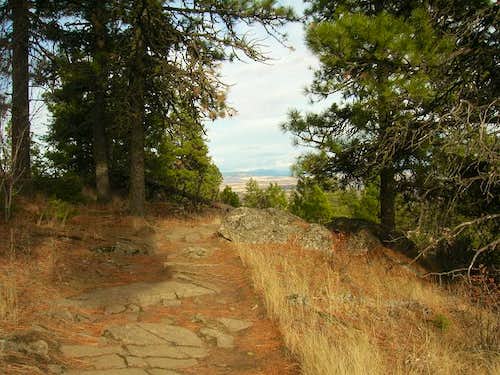 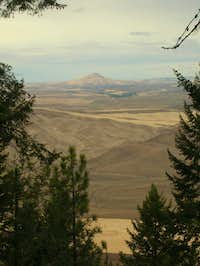 Kamiak Butte, like its neighbor Steptoe Butte is a quartzite formation. It is former seafloor sediment which has been forced upward then surrounded by the Columbia flood basalts and later covered again by wind carried glacial loess.

What sets Kamiak Butte apart from Steptoe and many other protrusions in the area is that Kamiak is a long ridge (not an isolated point) which has allowed for a special micro-climate zone. On the South Face of the ridge you will find little to no trees but on the North face of the hill a broad variety of Ponderosa Pine Douglas Fir and Western Larch have populated a mature forest.

The micro-climate is a result of the steepness of the north facing flank of the ridge. The ideal ecosystem for the thriving forest was created by the ridge which provides shade and lower temperatures. The rainwater is allowed to be absorbed rather than lost. One website claims that: "it may very well be the largest forested tract in all of Whitman County."

The Butte was named after Chief Kamiakin of the Yakama Tribe which is fitting considered he was also involved with the Palouse Tribe. There was an attempt in the 1950's to create a ski run on this slope but it failed quickly thereafter on account of the lack of snow.

In 1992 The park was given a $114,900 matching funds grant from the Washington Wildlife and Recreation Coalition to improve and renovate camping facilities and trails. Maintenance continues on portions of the trail but the main campground is in great condition now. 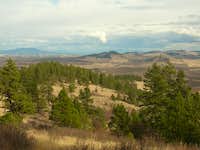 Pine Ridge
From either parking lot which are located a few thousand feet apart the trail will get you to the Pine Ridge Loop Trail. I would recommend using the second parking lot since the route from there is a bit steeper and the return down the other side of the ridge is more enjoyable going downhill to optimize time for views. The trail is 3.5 miles round trip and gains 650 feet.

Once at the top the views of the surrounding Palouse landscape are far reaching. With binoculars one can see the City of Moscow, ID and Pullman, WA as well and many of the other surrounding communities. On a clear day in fact one can see as far as 100 miles to the Wallowa Mountains.

From Pullman Washington travel 11 miles North along SR 27 then turn left on Clear Creek Road. After .5 miles make a gentle left onto Fugate Rd. (Road No. 5100). In another 0.5 miles take a left at the signed Kamiak Butte County Park Rd. The parking area is another half mile from that point.

Camping is allowed all year round but the park has been known to shut down in periods of excessively dry conditions for fear of fire.

1. It says here that the Northwest Forest Pass is required. Way back in 2006, the park used to charge a parking fee (but no pass requirement), but that was discontinued in '06 or early '07. As of July of this year, there's never been a pass requirement. So unless they recently changed something, this is incorrect in my experience. 2. Recently another trail has been opened and signed. It branches off from the Pine Ridge trail at the very summit and heads almost straight north down the butte for a bit before turning west and then slowly and eventually wrapping around to the east and taking you back to the parking lot. I only stumbled on this right before I moved out of town and hiked it once. It was fun, and a little rougher than the main, more graded trail. Unfortunately I don't have any more details.

My bad on being extremely slow to reply. I have made the change about the pass requirement. If you have any reference to the new trail you can point to it would be nice to see. Thank you.