KY1 has always captured the imagination of many a climber. There are 2 known routes. One from the East-South Eastern front along a rocky ridge to the summit where the height gain is a humongous 1400m and the other a knife edge ridge from the easier western summit to the main summit.

This latter route from the western summit is a taboo among the guiding community. About the former eastern summit, unfortunately most climbers fail to document the route, conditions and tactics to negotiate the almost inhospitable terrain of the peak. This former route is a rocky terrain and needs an early start and after a couple of hours from the base camp to the eastern ridge one is unfortunately still at ground zero trying to make an ascent of this bulbous 2 summit peak.

Hopefully, this brief account of our attempt at the summit should help other climbers. Most people climb the easier western summit. One can still use this post to get to the base camp. The summit attempt for the western summit doesnt really require a written guide.

Our route is quite different as well. We chose to climb a 1800ft tall ice wall to make it to an advanced camp site. The wall lies to the north west side of the summit. PLEASE DONT try this if you are not certified climbers/mountaineers. 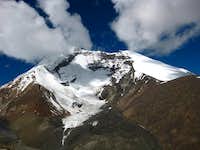 Kang Yatse - Eastern Summit is to the left

We were keen on doing the summit in 5 days as opposed to the 12 that people plan for a technical summit like the Kang. Again PLEASE plan adequately for acclimatization. We planned for 5 days because we wanted to do this alpine style. We are mountaineers and climb in the Himalayas quite often.

Day 1/28 Jul 10 - Leh to Shang Sumdo in a couple of hours. 2 hours to trek from Shang Sumdo to a settlement called Chuskarma. A beautiful place with a tented restaurant and campsites.

Day 2/29 Jul 10 - Chuskarma to Nimaling (Via Gongmaru-La @ 5200m). Really demanding terrain along a gorge. Crossing the stream on more than a few occasions. After 3 odd hours one has to climb for about 90 odd minutes to make it to the high Gongmaru-La. We had lunch here and after a look at KY1 we headed down south west towards the Nimaling campsite which is on the Merkha river.

Day 3/30 Jul 10 - Nimaling to the Base Camp across the hill. Demanding but short trek. We had to strive with the guide to set camp near the base of the eastern summit. Most (in fact almost everyone sets camp near the base of the western summit for ease and convenience). We were not picnicking. We meant business and convenience was not on our menu. Ferried basic equipment to the top of the rock face and decided to climb the 1800 ft ice wall adjacent to the rock face to reach the advanced camp.

Day 4/31 Jul 10 - Late start to conquer the wall. 2 of us (Jitu and I) were involved here. The guide chose to reach the advanced camp by the way of the rocky slope adjacent to the very ice wall Jitu and I were climbing. We started at 1300. Made it to the base of the wall by 1500. Geared up and began the ascent at 1530. After a death defying effort we made it to the top of the wall by 2130. Rested in the tent till 0230 the next morning. 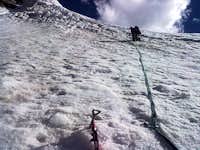 Day 5/01 Aug 10 - We began the final stretch of the ascent. Jitu had to return @ 6000m. The wall had taken its toll. The guide and I carried on. Made it to a bi-fork at about 6150/6200m. Took a lower less steep route. But the gradient constantly increased to our right (North) so much so that it was difficult for one person to even stand let alone walk. We had to prepare the route by digging with our axes. After traversing a few 100m and a climb of about 50m or so we encountered the crevasse which spoilt the till now successful expedition. Jumping across was not possible because of the really soft snow and steep gradient (one needs some hard ice beneath and at least a foot wide path in order to execute the jump). We returned to the bi fork and took the steeper route knowing well that the crevasse might have extended to the upper more steep route as well. But it was past seven now. After 50m or so, just a 100m/300ft short of the summit, the guide requested that we return because the snow was really slushy by now. He suggested that even if we made it to the summit just now, there was no way we could return safely. So wisdom prevailed and we returned from 100m or so short of the summit. We got the snaps of the surrounding peaks for proof of how high we were. We returned to the advanced camp fighting the slushy snow by 1000. We reached the base camp by 1230 or so by the way of the rocky slope north of the summit and we reached Nimaling by 1500 or so.

Day 6/02 Aug 10 - Really long trek. About 40 odd km. Just retracing the route. Started at 0800. Reached Gongmaru-La by 0910. One last look at our evasive KY1. Reached Chuskarma @ about 1130. Had soupy noodles at thhe tented restaurant. Almost jogged to Shang Sumdo making it by 1400 or so. The pickup van to Leh was a touch of luxury.

3 Climbers here. All Indians. So apart from peak booking we really didnt need anything else. Foreigners might have to get their climbing permits arranged well in advance as is the case anywhere in India and especially in Leh because it is a highly sensitive area. IMF who are based in Delhi has an office in Leh too. It could cost between 300-400 USD and could take 6 months.

Our campsites were @
Day1 - Chuskarma (About 12-15 km from Shang Sumdo)
Day2 - Nimaling Plateau (About 20-25 km Chuskarma) on the river Merkha and Other side of the really high Gongmaru-La.
Day3 - Base of the Eastern Summit. The usual base camp site is base of the western summit (For both the Peaks). Take your pick.
Day4 - Advanced Camp @ 5800 or 5900m on top of the rock face which lies North of the summit. Albeit for a few hours.
Day5 - Nimaling Plateau, as in Day 2.
Day6 - Back to Leh.

The images have been sorted day wise for convenience. Should be useful for somebody planning an expedition to KY1 or even for someone simply trekking in the Merkha region.