What to do when bouncing back from the flu? Something relatively tame and under 10 miles with good bailout options. Khyber’s Slide on Lower Wolfjaw (just south and over the ridge from Bennies Root Canal) seemed like a perfect option. As a bonus, I’d get another winter bushwhack 46 under my belt if we bushwhacked to the summit.

Background
This is one of Irene’s creations from 2011. A couple weeks after the storm I climbed Bennies to the summit of Lower Wolfjaw then bushwhacked down to this track and followed it over to UWJ’s Wide Slide (just up and right of the old lean-to site). Brendan Wiltse named it after his dog when he climbed it with permission a couple days after Irene as part of surveying storm damage while caretaking at JBL. As a point of reference, Drew Haas used the name Lower Slide in his aerial guidebook and I used to use the Northwest Ridge Slide as a descriptive name for lack of anything better.

The main areas of the slide are the runout, low-angle slab, 50’ “step” leading to another 40’ step, slightly higher angle bulges of slab to the top.

On the Trail
Loren Swears joined me this time around; we began walking toward the Southside Trail from the Garden at about 7:15 a.m. With little snow in the woods at low elevation, the hike went quickly and we arrived at Wolfjaws Brook in what seemed no time at all. If you’re in a hurry, I’d recommend just following the Southside Trail to the Red trail. Cut into the drainage before somewhere near the lean-to. We, however, opted to tromp through the powder up Wolfjaws Brook directly from the Southside Trail. I hoped to find a few nice pitches of ice in the streambed. 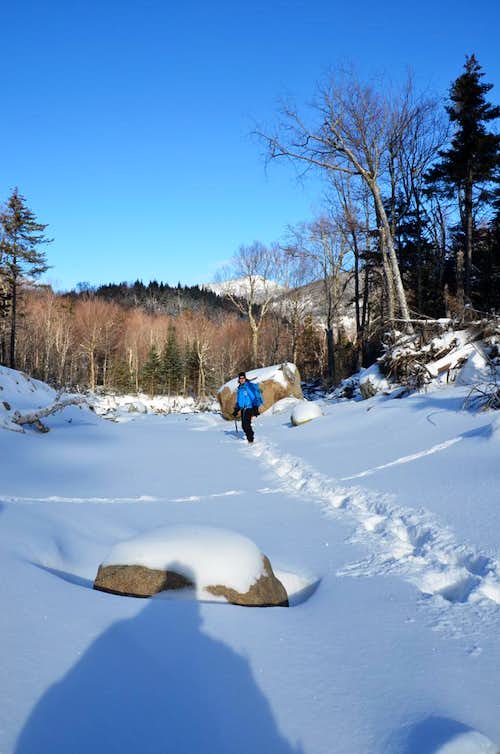 Loren fell through to his ankle a couple times, but didn’t get wet. Most of the stream is frozen, but obviously not all of it. Within 45 minutes we found ourselves intersecting the red trail and followed until we saw the exit to our target. Deep powder led to thinner powder over ice in the rubble/runout section.

The transition to slab was marked by thick water ice with some blown powder. Underneath and unseen were the small ledges and slab minutiae that makes this slide nice in non-winter conditions. We rounded the bend and I got my first surprise—fat yellow ice on the first ‘step’ or ledge below the confluence of the two tributaries. 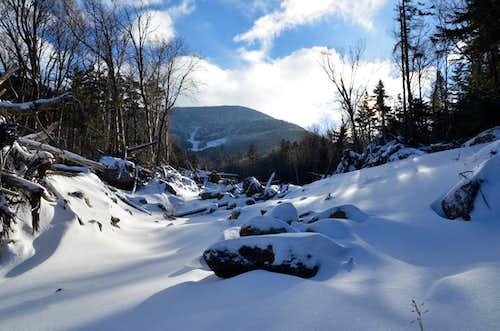 I gave Loren my camera and asked if he’d nab some photos of me playing on the steeper ice (still low angle by ice-climbing standards). It was time to put the front-points of the crampons to use. A 5’ wall led to some snow at the bottom of the step. Temperatures near 0 Fahrenheit made the ice brittle and climbing a challenge. Loren skirted the side of the slab near the debris and a few minutes later we met on top and walked up to the steeper second ‘step’.

A vertical section on the right was tempting, but shorter than the line up the center. I climbed up the center on 70-75 degree ice for about 35 vertical feet and traversed to a short steep gully. This was a technical ice climb thrown in as a bonus. I took my time as Loren bushwhacked around the northern (left) edge. The ice was a couple feet thick and I felt secure with each placement though I had to clean out several pockets of snow-covered ice along the way. I found the short gully was slushy below the surface so I climbed slightly above the flow and exited on the top right. I was positioned above the 20’ vertical flow and moved up to the low-angle ice above deliberately before walking over to Loren and sitting to catch my breath.

As an aside, the consequences of this step in particular are high if you slip—you’d fall 35-40 feet then tumble or slide down to and over the first step. I may talk casually about this, but I take it very seriously. Neither ‘step’ is necessary to climb in winter or dry conditions—just stay along the side.


Kevin on the second step 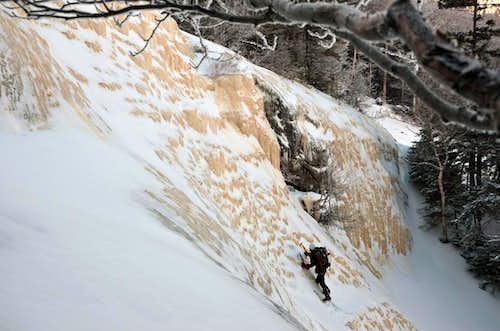 We still had 800 more ground feet to cover to reach the top. The ice climb wasn’t over, but it was less exposed compared to the ‘steps’. Once at the top we gathered ourselves and changed into snowshoes for the bushwhack to the summit. This would take us up 500 vertical feet over 1000 ground feet at a heading of 150 magnetic.


Loren climbing along the upper section. 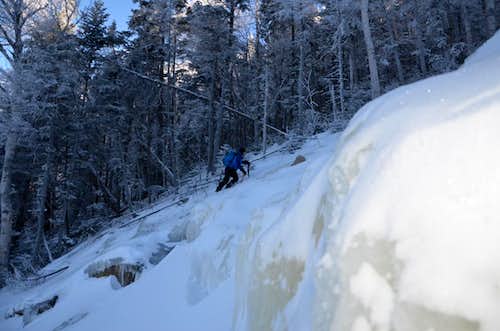 Top of the slide

I’d been fighting the flu off and on for three weeks and felt strong on the slide. The exertion of crawling up a steep slope of unconsolidated snow changed that, however. Our track took us through intermittently open and dense forest and up a few icy ledges. Near the top we encountered a larger ledge and headed left along a gully. There was only a couple feet of snow until that point, but the gully and loose woods had another foot. A climb up a final steep rocky slope led to the krummholz at the top of the ridge. We intersected the Range Trail about 75 northeast of the summit.

The icy temperatures below were inverted and we enjoyed the relatively warm temperatures in the bright sun. Until that point, we’d been mainly climbing in the shadow of Lower Wolfjaw. I silently reflected on the last time I was on Lower Wolfjaw during winter—midnight of 2010.
We found ourselves back at the Garden at 3:15 p.m. some 8 hours after beginning the trek, faster than I thought. Another great day in the woods, another High Peak winter bushwhack and slide climb.

Loren during the bushwhack up the NW flank 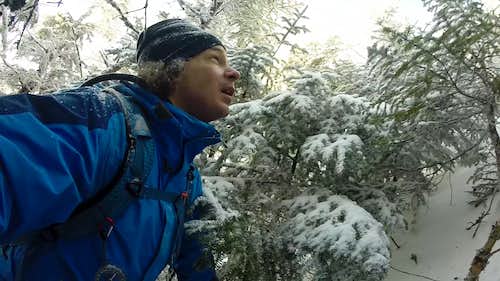 Excellent trip report....although I must say I am a little envious of all the ground you cover in the dacks

Excellent trip report....although I must say I am a little envious of all the ground you cover in the dacks

Thank you very much! It's a blessing living in the heart of the peaks. Thankfully I can watch the weather and pick the best opps.