Kun is part of the NunKun massif in the Zaskar Range of the Himalayas of Kashmir in northern India. It is situated approximately 50 miles from the line of control (Pakistan border). Today Kashmir includes the Indian administered territories of Jammu and Kashmir (which consists of Jammu, the Kashmir Valley, and Ladakh), the Pakistan administered territories of Kashmir and Gilgit–Baltistan, and the Chinese-administered regions of Aksai Chin. The NunKun massif is considered a part of the greater Himalayan Range, although the Karakorum Range is less than 100 miles away.

Kun at 7077m is one of two seven thousand meter peaks in the area, the other being Nun at 7135m. The exact height of Kun varies slightly depending on the source. Nun and Kun are just a few miles apart, although they have entirely separate routes. The third highest peak of the massif, Pinnacle Peak at 6930m, is connected to Kun by a high ridge. These three high peaks all raise from a large high plateau of several square miles situated at approximately 6000m.

Kun was first climbed in 1913 by Italian mountaineers Mario Piacenza and Borelli ed Gaspard. The second ascent was not until 1971 by an Indian Army expedition. Today there are a few expeditions to Kun every summer. In late summer 2015 there were two teams on the mountain.

Regarding difficulty of the normal route on Kun, it is much harder technically than other seven thousand meter peaks such as Pik Lenin or Muztag Ata. However unlike Lenin, the predominant style of climbing Kun is with the help of Sherpas that fix ropes and carry heavy gear, which makes it much easier physically than the above seven thousand meter peaks. The technical crux of Kun is a several hundred meter ice face of approximately 50 degrees in steepness that gains access to the upper plateau at 6000m. That said, with fixed ropes this terrain is very manageable. With the use of Sherpas I would place Kun solidly in the category of easiest seven thousand meter peaks of the world. Of course it goes without saying that climbing anything of this elevation is difficult. 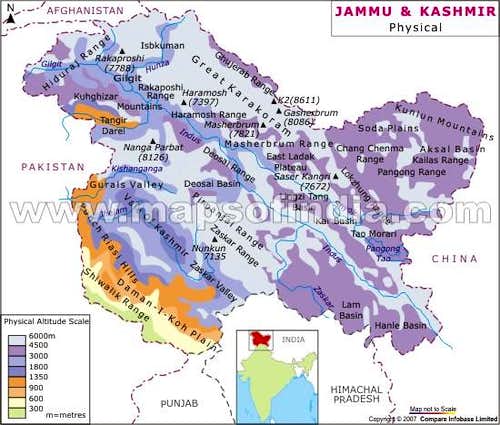 NunKun Area Map
First one must get to India. The most logical place to fly to is Delhi. From Delhi there are two options: 1) fly to Srinagar (the capital of Jammu and Kashmir), or 2) fly to Leh (the centerpiece of Ladakh). Either option requires a one hour flight, of which there are amazing views of the Himalayas. One can clearly see Kamet and Nanda Devi on the flight to Leh. There are daily flights from Delhi to both of these cities in the summer. The leading airlines for these routes are Air India and Go Air. Leh has the advantage of being fairly high in elevation (11,000 feet) with easy access to easy high peaks, which allows for some pre-acclimatization before heading to Kun. Additionally it is safer than Srinagar. The next place to get to is a town called Kargil. From either Leh or Srinagar the drive is around 6 hours in private transportation to Kargil. Regular buses also run to Kargil from either city. Kargil is very close to Pakistan. There was a war here in the 90’s between Pakistan and India. Kargil is not a pleasant town. I heard that old Buddhist monks in Ladakh wished upon their worst enemies to be reborn in Kargil in their next life. They don’t sell beer in Kargil either.

From Kargil one travels up the Suru valley to a village called Shafat. The distance is only approximately 50 miles, but the rough road makes for very slow going. Plan on five hours.

A typical expedition to Kun is 3 weeks. Adding a week before Kun acclimating in Ladakh is highly recommended, both from a climbing perspective and a cultural perspective. Ladakh is a Buddhist land with mesmerizing monasteries, and is regarded as more Tibet-like than Tibet is now (due to Chinese policies).

Below is the description for the normal route.

The route starts from the village of Shafat at what I would estimate to be around 12,000feet. The village is only inhabited in the summer, and consists of just a few houses and a police station. The hike to base camp is first through open meadows and then rough glacier moraine. Finding the right way through the moraine can be challenging. The hike from Shafat to base camp can be done in a day, but the villagers who own the horses that carry the expedition gear to base camp may want to split it up into two days. 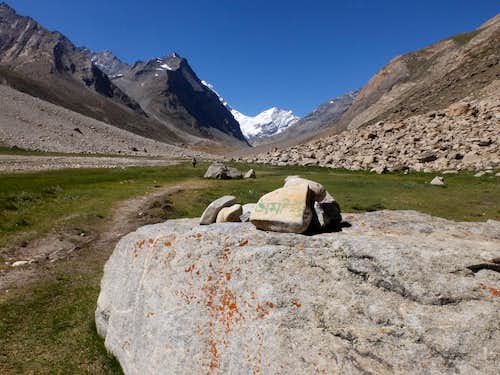 Approach to Kun Base Camp 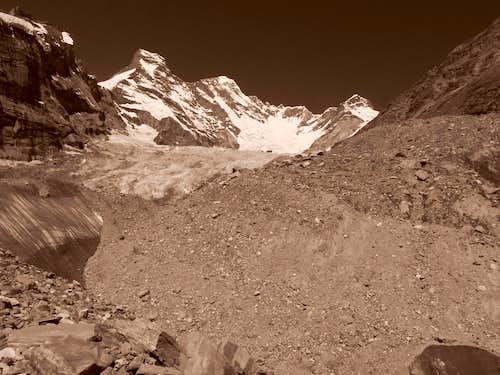 Terrain On Approach to Kun Base Camp 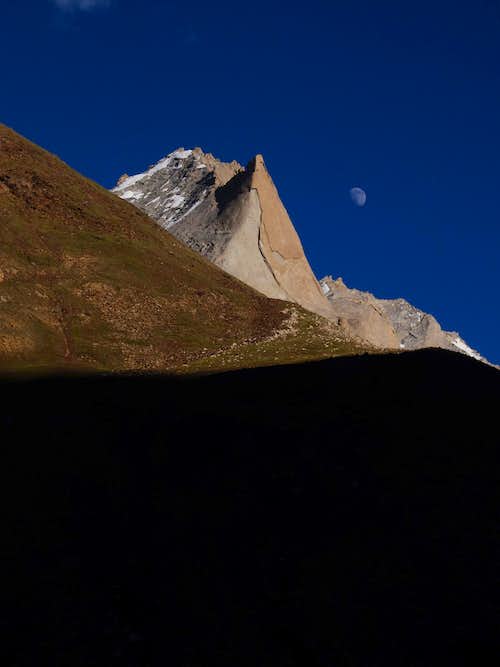 Unknown 5000m Peak on Approach to Kun Base Camp

Base camp is situated at around 14,000 feet. The base camp area is large and comfortable and can accommodate several teams. There is running water nearby. 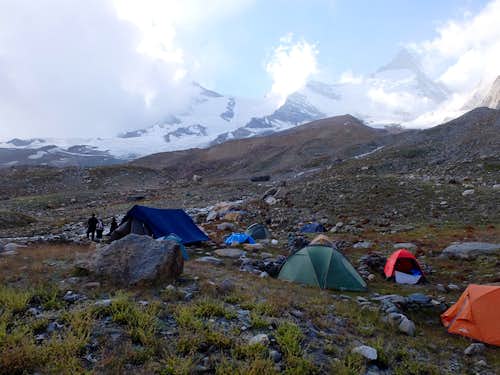 To climb Kun you first have to get to a high plateau at around 20,000 feet. Getting up to the plateau is the technical crux of climbing Kun. There are a few ways to get there. The traditional way has camp 1 on the glacier at around 17,000 feet right below the 2,000 foot 50 degree face, camp 2 at the top of the headwall, and camp 3 at 21,000 feet at the far end of the plateau. This approach makes for a long day from base camp to camp 1 that requires glacier travel, but makes it much easier getting up the crux headwall. An alternate camp 1 is on rocks above the glacier yet several hours from the bottom of the headwall. The advantage of placing camp 1 here is it is just mostly walking on talus to camp 1 and there is running water at the camp 1. The downside is that it is too far to get to the traditional camp 2 at the top of the face from this camp 1 in one day. Therefore camp 2 must be placed halfway up the face on the one flatish section, and with placing camp 3 in the same spot at 21,000 feet at the far end of the plateau it makes for a longer day from camp 2 to camp 3. 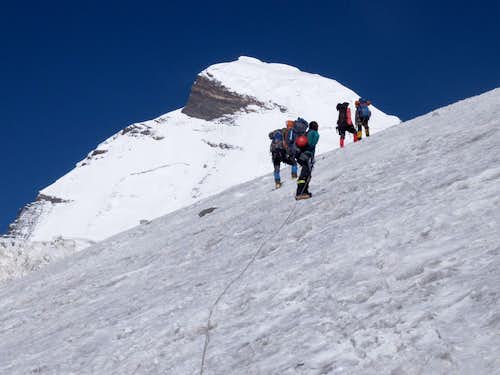 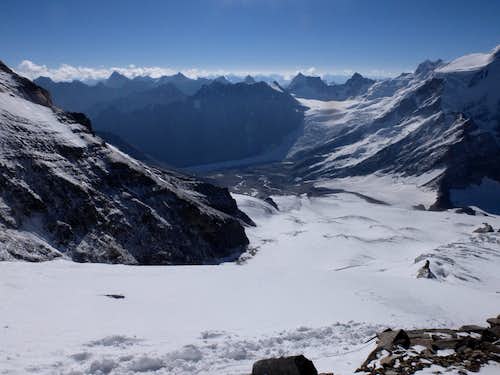 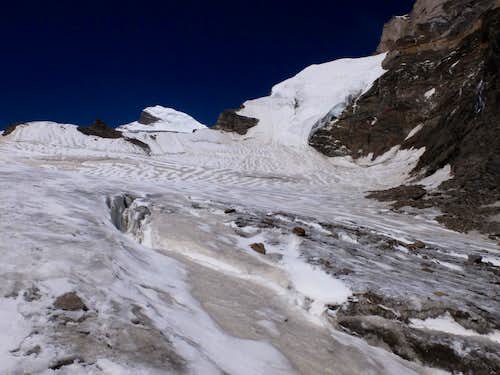 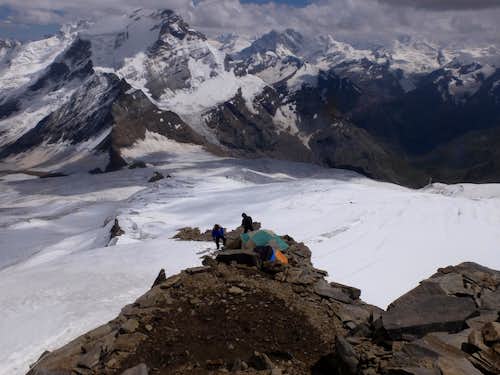 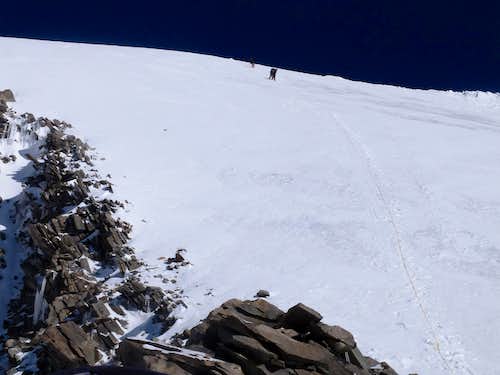 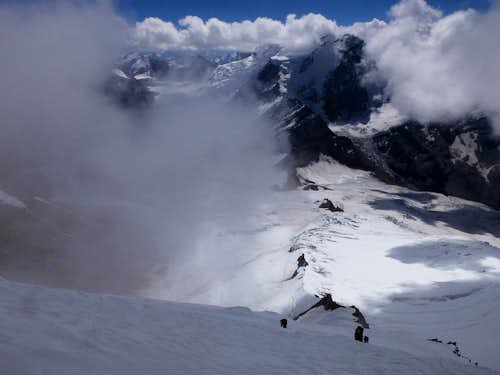 Once on the high plateau the terrain is gentle as you slowly ascend to the high camp at the far end of the plateau. There are a few crevasses up on the plateau that are easily avoidable. 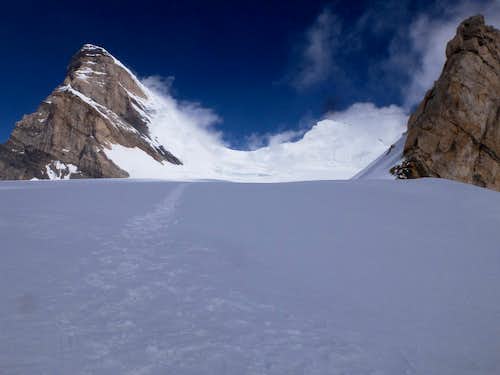 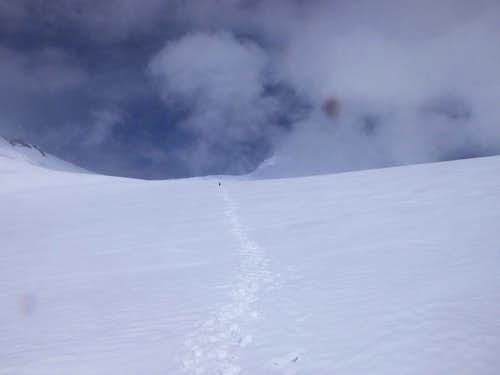 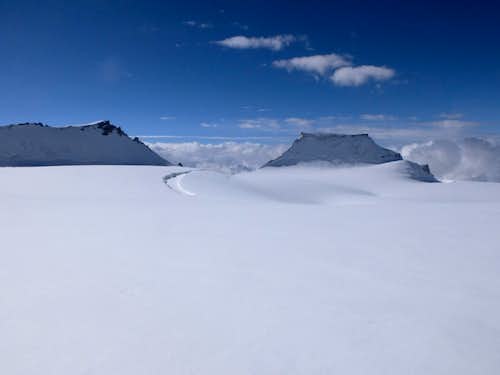 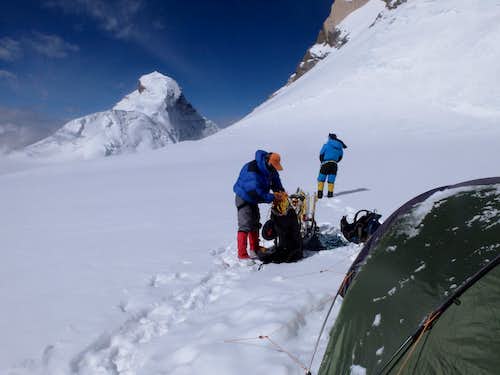 From high camp the route ascends steeply for 200 meters (at least 50 degrees at the steepest sections) to a col between Kun and Pinnacle Peak. From the col a long angling traverse on a 45 degree face leads to a false summit. This angling traverse is very tiring with ice conditions as opposed to snow. After negotiating a few cornice features above the false summit easy slopes lead to the true summit. 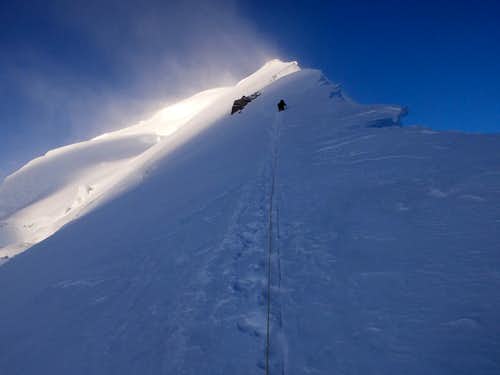 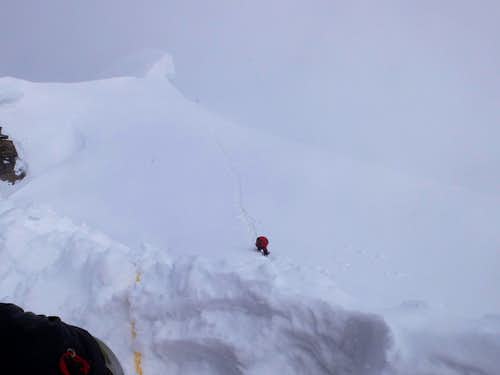 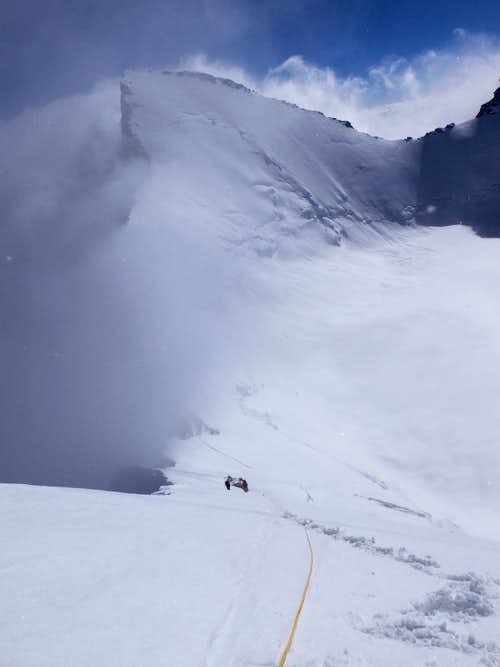 One of the biggest (if not the only) downfall of climbing in India is the red tape. India is a very bureaucratic country. Foreigners climbing 7000m peaks require a briefing in Delhi with the India Mountaineering Federation (IMF) and also require an IMF supplied Liaison Officer to participate in the expedition. As a foreigner you are responsible for paying for the Liaison Officer. For Kun this is around $1000 USD. If there are multiple foreigners this is split and as such the additional cost is not as much. Thankfully all other services in India are relatively cheap so the overall cost of climbing an Indian 7000m peak is still less than a 7000m peak in Nepal (but more than say Pik Lenin in Kyrgyzstan).

Summer is the popular time to climb Kun. I am not aware of a winter ascent, but that doesn’t mean it hasn’t happened. In earlier summer the route is likely to be technically easier (less ice) however the route may not be fully consolidated early in the summer. Later in the summer there is more ice which makes the route more difficult, however avalanche concerns are much less in early September.Either option seems to carry a decent chance of bad weather.