Labor of Love-- Traditional Climbing in the Longwang Range 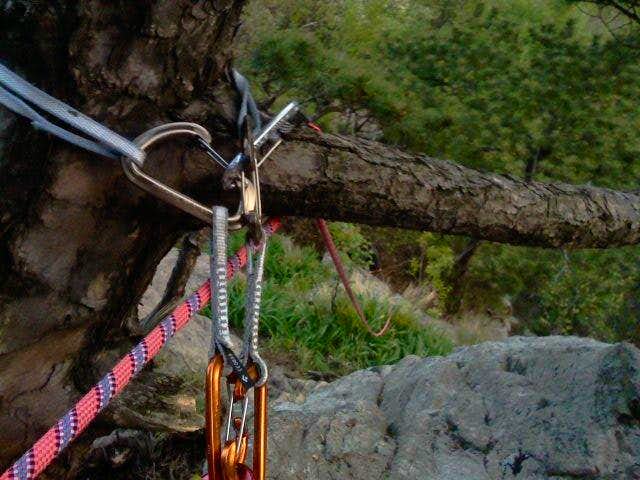 Yikes!!!! what the hell is going on there????
sort of hard for me to tell exactly, but it doesn't look good!

Have been inactive lately. Would be very interested in your feedback. We repelled from a solid equalized top anchor on a 60 m rope. Then the pitch leveled out for about 5 m and then dropped off again for another 10 m or so. We were on a 60 m rope. The picture you see is a tree above the last section of the climb. I set up two equalized quickdraws there and belayed behind it from my reverso on the final pitch in a solid stance. In my thinking, as the climber below was on toprope, this provided an intermediate belay point as belaying from the very top-- basically 60 m of rope above-- would create massive rope drag and leave the climber out of sight on the lower part. Setting that up provided an additional friction point for the toproped climber below, and I used my body stance and belay device to take the toprope fall (low factor) from below. In the worst case scenario ie the 5" diameter branch snapped I was still behind a thicker tree, through my reverso, and roped into the main anchor above. I actually took a number of toprope falls on this rigging with my belayer above me, trying out a difficult section, and it held extremely well despite her being much lighter than me.

I think there might have been a simpler way to go about it, but did not want to pull down the super bomber top anchor to rerig it at this section for a small cliff. That would have taken a lot of time, and I felt the lower anchor would have been less bomber-- particularly as we were toproping the whole pitch.

I would love to hear your thoughts on this-- ie how to stay on one toprope anchor and repel/ toprope several mini-pitches on ground that goes quickly from vertical to flat back to vertical.