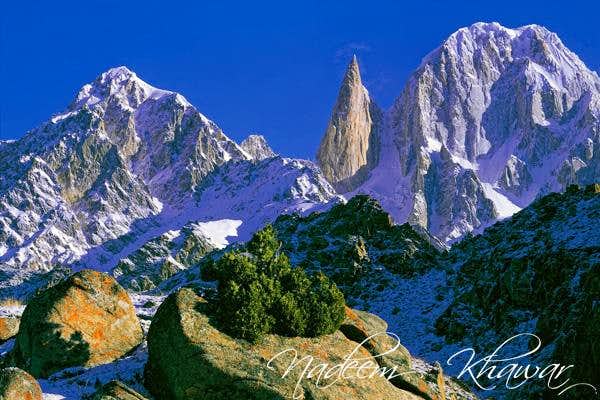 Bublimotin, Bubli Motin, Bublimating or Ladyfinger Peak, is a distinctive rock spire in the Batura Muztagh, the westernmost subrange of the Karakoram range in Pakistan. It lies on the southwest ridge of the Ultar Sar massif, the most southeasterly of the major groups of the Batura Muztagh. The whole massif rises precipitously above the Hunza Valley to the southeast. Bublimotin, while having little prominence above the saddle with nearby Hunza Peak, is particularly notable for being a sharp, relatively snowless rock spire among snow peaks. This, combined with its height above the valley, makes it quite eye-catching; hence the distinctive name. It provides a 600m (1830 ft) rock climb (with a very serious alpine approach) and has been the scene of some notable paragliding. Thanks for Sharing and your time. Nadeem Khawar.
« PREV NEXT »

peak and very nice photo with beautiful lighting and colours.

Thanks sir,
Your comment are asset for me.
Love your both smile and style.
Best regards.
Nadeem Khawar.

Excellent shot of this beautiful place. It's only one of the many pearls of Pakistan.