Lang Biang Mountain is located in Vietnam's Lac Duong District in the Lam Dong Province on the Lang Biang Plateau. The plateau is in the Lam Vien highland which is home to the two highest peaks of this area: (1) Bidoup Ban (2,287m) which is regarded as the roof of Da Lat, and (2) Lang Biang at 2,167m.
Da Lat is the closest sizeable town and is located about 12km from Lang Biang Mountain, or a 30min taxi ride.
Lang Biang Mountain has three peaks, (1) a paved road leading up to a radar base which is used by most tourists as it is a simple drive up with jeeps, (2) the actual Lang Biang peak at 2,167m which can be reached by dirt roads/trails and only hiking and (3) an unnamed peak (no details available as of today). The views from Lang Biang's peak include vast valleys as well as the Golden and Silver Streams and Da Lat city itself.
The mountain's legend says that the name Lang Biang was derived from a couple's name who were deeply in love with each other - the boy named K'Lang and the girl named Ho Biang. They fell in love with each other after K’Lang saved Biang’s life from a fierce heard of wolves. However, they weren’t allowed to get married due to the long-standing feud between their tribes.

Generally, there are two versions of this story. One said that at last they got married and then moved onto a mountain to live. Unfortunately, when Biang caught a critical illness, K’Lang had to come back to the tribe to ask for help and the people there shot him with a poisonous arrow. However instead of K'Lang, it was Ho Biang to be shot since she had shielded her husband. K'Lang could not suffer such loss and as he cried, his tears made up a big stream which is now called Dankia (the Golden Stream).

The second version said that the couple committed suicide together since they couldn’t get married.

In both versions, Ho Biang's father was so repentant of his daughter’s death that he unified the tribes into one called K'Ho and allowed boys and girls in the tribe to get married to each other. Their graves then grew into the two giant mountains and in order to memorize the couple with profound love, the mountain range was renamed into what we call it today: Lang Biang.

Lang Biang mountain can be reached from Da Lat via taxi (30min) or bus (around 1h). Da Lat on the other hand is a 30min flight from HCMC or a 2h flight from Hanoi respectively. Most airlines operating in Vietnam fly to Da Lat (i.e. Vietnam Airlines, VietJet Air, JetStar...) from HCMC and/or Hanoi multiple times per day.
From Da Lat it is about 12km to reach the entrance of the national park (by car, bus, bicycle). A local bus (No. 5 to Lat Village) runs from Da Lat right to the national park entrance. The bus ride will take 45 - 60min and cost around 9.000VND/US$0.50.
A taxi ride will set you back around 300.000VND and takes around 20 - 30min.
From the national park entrance, Lang Biang mountain can be reached via jeep (peak 1, paved road) or via hike (peak 2, actual peak).

As mentioned above, Lang Biang got three main peaks, whereas I will focus on the major two peaks for the routes, (1) the radar station and (2) the actual peak. Below will give a short description of the route for each peak: 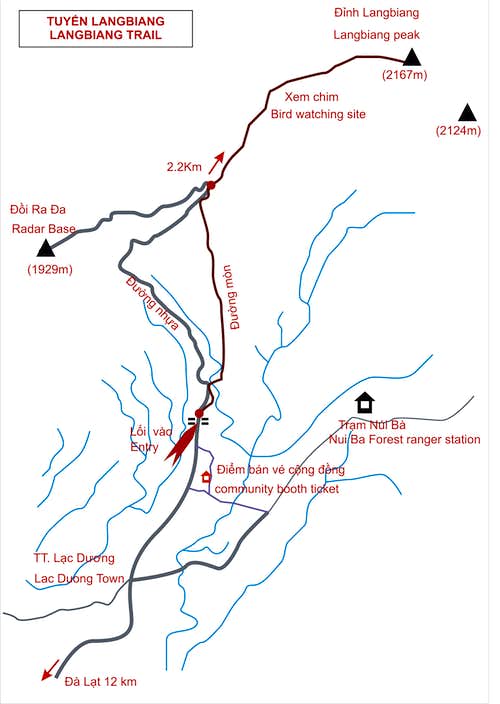 As shown in the map on the left side, the paved road starts at the entry gate and continues the way up to the radar base (grey route). Jeeps will take this route up to peak (1) with tourists. An entrance fee of 40.000VND has to be paid at the park entrance. Afterwards visitors are divided onto the jeeps for the short ride up the mountain.

The actual Lang Biang Peak can be reached via hiking trails starting right hand side of the entrance gate (red route). It is not needed to pay the park fee of 40.000VND as there will be another hut closer to the main peak which will charge 20.000VND.
The trail starts right next to the park entrance (right side) on a side street passing a few houses/huts. After about 5 minutes the trail will continue upwards between coffee plantations. Follow this trail for around 20 minutes till you end up at the beginning of a pine forest. From this point, the trail will be a bit steeper and continue through the pine forest till the actual paved road (the once that jeeps will take as well). The plantation and pine forest trail is quite easy to follow (see pictures for further guidance). After reaching the paved road turn right and you should see the hut that charges 20.000VND for the peak. Once paid, the trail continues upwards. Again, it shouldn't be very difficult to follow as the trail is used quite often and hence easy to follow. The wider path, still going mostly through pine forest, will get more and more narrow the closer you get to the actual peak ascent route which starts about at where pine forest is replaced by a more jungle type vegetation. At that point the trail will get steeper and steeper, whereas the difficult level is still manageable for normal hikers. Again, the trail will be easy to follow and has distance markers from time to time. The same trail can be used for the descent.
In total, the ascent and descent takes around 3 - 4 hours depending on hiking speed.

Vietnam still requires visas forselective countries (detailed list please refer to link in external links).Most European countries (i.e. Germany, France, Finland, UK) get a 15-day visaexemption as do ASEAN member states with their 30-day visa exemption. For othercountries, visa on arrival with a pre-arrival visa letter (can be obtainedonline) is an option. The visa letter and respective documents (passport,pictures etc.) need to be shown at the visa on arrival office at the port ofarrival (i.e. Hanoi or HCMC).

Lang Biang mountain is in a national park hence entry fees are required (US$2). Further fees might be applicable if you hire a guide or need to pay some "coffee money".

Climbing/hiking can be done all year long due to the mild climate in Da Lat.
April to October is considered to be the rain season though with January to March and November to December beeing the best months to hike.

Camping to reach the peak is not required as the hike will take 3-4 hours max. Nevertheless there are camping sites around the national park and da lat.