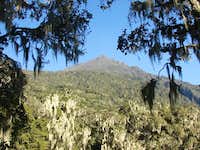 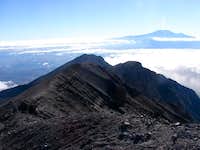 Little Meru & Kilimanjaro
Little Meru (3,801m) is an acclimatization peak near of normal route of Mount Meru (4,566m). It is usually climbed in the second day of the route from Momella Gate (1,500m). The stage 2 reachs Saddle Hut (3,570m) from Miriakamba Hut (2,514m) and it's a good option climbing Little Meru in the afternoon to gain some meters searching acclimatization before the stage 3 to the main summit of Meru. Little Meru is easily seen from the route to the Saddle Hut as a nice pyramid and probably you want to climb it!

Another good reason for climbing it is the nice view of the ridge between Mount Meru (4,566m) and Rhino Point (3,800m) from its summit.

The ascension is normally possible in less than 1 hour from Saddle Hut and it's easy with a good path. I really think that it is not necessary to write the route because it is evident. For this reason I've attached to this peak the route of Meru with some indications about it. The guides can give you information about the way up or even go up with you.

Finally, let us say that Arusha National Park has began giving certificates to those climbers who reached Little Meru's summit, regardless of their gating to the main summit or not.

The normal trailhead is Momella Gate (1500m). Arusha and Moshi are the closest towns.
Main airport is Kilimanjaro International Airport (KIA) but you can use the airports of Dar er Salam or Nairobi (Kenia) with another possible approachs. 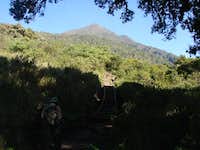 Lt Meru and ranger
-Park Fees are mandatory.
-The use of a Guide / ranger of the park is mandatory. In the two first stages is frequent the present of wildlife and it's dangerous without the gun of the ranger specially for the attack of a lonely buffalo.
-The considerations writen by Jhon in the web of Mt Meru are very usefull.