Looking ESE from the summit... 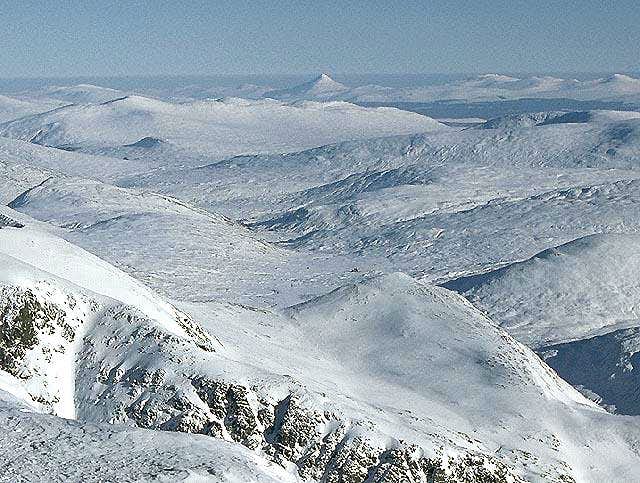 Looking ESE from the summit towards the distant Schiehallion (1083m). It was there, in 1774, that the Rev. Nevil Maskelyne, Astronomer Royal to George III, carried out experiments which produced results to enable an estimation to be made of the mass of the Earth.
« PREV NEXT »
Tony Simpkins
Image ID: 30505

Is that a building?

Is that a building in the dale at center? Looks like it.

Schiehallion is a pretty neat mountain. I should have climbed it when I drove past its east side in May 1997. It should have a page devoted to it on this website.

There aren't many buildings in that direction, Klenke; if you scroll forward a few images in the Ben Nevis collection you'll find a map.

Wikipedia says that Maskelyne's observations (which took him 17 weeks of field work) produced an estimate of 4.5 for the specific gravity of the Earth, and that the modern figure is 5.5. 22% error is large, but considering the instruments used, the method and the conditions, I think it's amazingly good.

General Wade was building his military roads in the Highlands around 1730, and they may have helped Maskelyne approach Schiehallion, but I'm sure that he then had to suffer the moors and the midges around the mountain on foot without tracks or paths. Big up, Nevil! Makes up (a bit) for dissing John Harrison's chronometer...