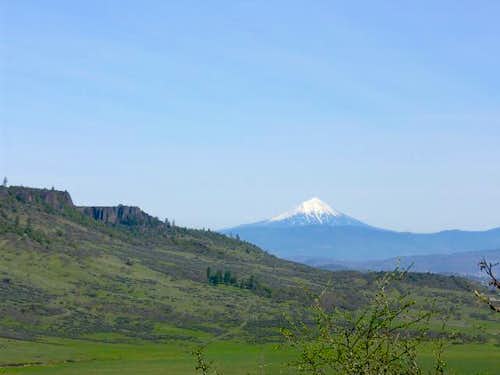 Difficulty: Easy Class 1 Distance: 5.4 miles round-trip Elevation Gain: 800 feet Situated in Southern Oregon just off of Interstate 5 are two extremely popular hiking/climbing destinations. Upper and Lower Table Rocks. Lower Table Rock receives upwards of about 10,000 visitors every year. The Lower Table Rock trail is a moderate hike/climb and gains about 800 feet of elevation in just over 2.7 miles. This area was originally part of an area signed into a treaty by the Rogue River Indian Tribe and the United States of America on September 10, 1853. It is now owned by both the Bureau of Land Management and the Nature Conservancy. Both which give guided tours mainly to school aged children as field trips. The views are great from Lower Table Rock. You can easily see Mount McLoughlin, southern Oregon's tallest volcano. Other views include Upper Table Rock, the Siskyou Mountains and the cities of Central Point, Medford and Ashland as well as Sams Valley.

No permits are required to visit Lower Table Rock. Access to Lower Table Rock is open year round. Safety concerns include watching out for Rattlesnakes, ticks and Poison Oak as well as making sure you bring enough water and sunscreen as it can get very hot in the Rogue Valley during the Summer (up to 100+ degrees). Another obvious safety concern is the cliffs around the rim of Lower Table Rock. OTHER RESTRICTIONS: No motorized vehicles No Pets No Camping No Campfires No Horses No Flower Picking

Each season has something to offer. Probably one of the more popular seasons is Spring. There is an abundance of wildflowers that start to bloom around February and on through June. One such wildflower, the Dwarf Wooly Meadowfoam can be found only on Upper and Lower Table Rocks and is not known to be found anywhere else on Earth. Other attractions include a rare species of Fairy Shrimp that are found in the vernal pools atop Table Rocks and are federally protected as they previously were only found on top of these two ancient lava flows. I am now told by fellow SP member cjwhat that they can also be found in vernal pools around White City, OR, the Medford, OR airport, throughout Josephine County and in the South Central Valley of California. Winter is probably the least desirable time to climb because the trail can get muddy from all of the rain. But the views are great no matter what time you decide to go.

No Camping is allowed on either Lower or Upper Table Rock.

Feel free to check out my other mountain pages.