Several years ago local climber, Tad Welch, put up a couple rock climbing routes on Pyramid Peak while rope soloing—A Dream of Wind Horses and Return to Forever. This style of protected climbing was inspirational and planted a seed. He explained his system to me, which prompted a lot of research until I settled on a setup that felt comfortable. I didn’t originally plan to try the arête route in this report as a rope solo, but after much thought, it seemed like the ideal line for it.

Two weeks ago, the end of May, I walked atop four feet of snow to spend some time in the Gorge. I wanted to relax and just enjoy the scenery though I brought a rope and gear. The trip gave me time to study a couple lines in detail as well as watch the remaining ice crumble from cliffs. Two weeks with some hot weather in the mix melted most of the snow. Mt. Marcy’s remaining snow field was still noticeable.

This trip found me alone again given the COVID situation and the desire to protect my family by limiting exposure, so the hardest part was finding the motivation to get up at 3:15 AM on a vacation day with the knowledge that no partner was waiting at the parking lot. I could simply turn the alarm off and catch up on sleep. I was walking by 4:10 AM and awake enough to feel some excitement about what the day might bring.

I believed the route was moderate in grade, under 5.10 yds. Nonetheless, I wanted to check it out on rappel before committing to the climb. I realize the word conservative is relative since I trekked 8.5 miles into the backcountry alone to rock climb. That said, I wanted to be conservative during my day and planned to bail on the attempt if something…anything…felt truly wrong. I vowed to climb something well below my lead grade.

The majority of my slide-climbing adventures were undertaken alone a decade ago. Since then the goals have become increasingly technical so I’ve had excellent partners with which to share the trail and the rope. Another person or two made the trips more enjoyable—camaraderie! Since I was solo, I fell back into reflecting on life, prayer, and enjoying the peacefulness of silence in nature as I walked. The birdsong was incredible as the sun rose over the treeline. The migratory songbirds were back for the season.

I didn’t see a soul on the way in—perfect. Only the last 300’ of trail near the Haystack junction had snow and there were only small pockets once I crested the col and dropped into the Gorge. I didn’t need the microspikes strapped to my pack after all. Rather than follow my usual approach, I crossed the drainage halfway down to Marcy’s first cliff and bushwhacked up Haystack’s gnarly flank. My energy was good; I’d found my pace early and maintained it. This was a concern since I’d fallen out of shape given the current working setup.

I arrived at the base of the wall at 8:30 AM. This was a single pitch line, so there was no rush to start climbing. I studied it and enjoyed the morning without feeling pressure from encroaching weather or darkness. I walked around the wall and set up an anchor at the top then rappelled over the line. It was naturally quite clean. An obvious crack traversed the top, so I placed gear to redirect the rope as I descended. By the time I reached the bottom, I was happy with the options to protect myself during the ascent. The next task was to top rope the line to get a feel for how it climbed. 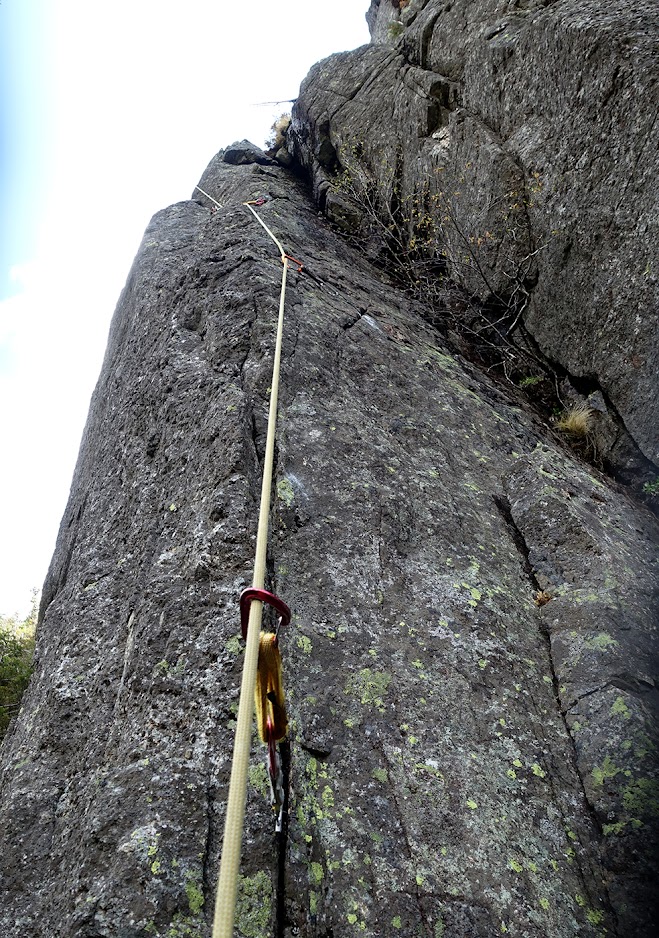 View up after the first rappel.

The moves off the ground got right to business following a crack on south side of the arête. The hard start (for the grade) led to an early crux before a short section of 5.5 terrain. A block on my right provided a restful stance though I stepped gingerly since it was in-place but detached. The moves from there to the easier central section were challenging. A pair of small offset brass nuts would protect a muscly move using a finger pocket and a foot on a small nub of the arête. The easy section was on the classic “moonrock” caused by differential weathering. We see this often in the Gorge and it always offers nice edges for the feet and hands. This led to a solid flake after 15 or 20 feet. The next section required a traverse from the flake to a solid crack. I knew I was on top rope and would fall no farther than a few inches, but the movement was slightly overhung and unnerving. Once I was secure in the crack, I worked up to a ledge and another crack to finish.

I felt good, but wasn’t keen on leading it. Again, I rappelled and re-clipped my gear along the way. I took some time to think as well as grab some water and food. Doubt creeped into my mind, so I fell into prayer about making correct decisions etc.—always a part of my life though I only write about it on occasion. Again, I climbed it on top rope and removed the gear along the way. Moves that made me a little nervous felt slightly better, but I was still apprehensive at the top when I broke down the anchor.

I walked off in indecision, but without feeling pressure to “put something up.” I knew I could walk away and still be happy with the day. I was here to learn a bit more about myself and be a student of “the journey.” I started hiking in 1999 with a walk up Pitchoff that seemed like a big wilderness experience. I had learned much since then.

I said another quick prayer, which was really a turning point that gave me a sense of calm. I set up an anchor at the bottom, stacked the rope with backup knots in a small secondary pack, tested my setup, and thought through the moves—I could make each move without issue (even though the gear was good and would catch me if I fell). I felt peaceful as the wind picked up and I started up. 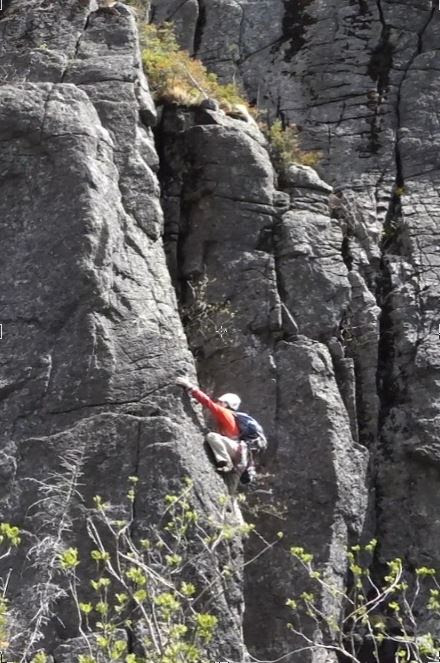 Climbing easy terrain in the center.

Deliberate climbing with good rests made it a relaxing experience. The big move to the easier terrain left me with a decision. Earlier, I’d found a shallow hidden horizontal crack on the left of the arête, but placing gear blindly on lead was awkward and burned energy. I chose to run it out to the next gear. Short of passing out, I was not going to slip. Once at the next crack, I doubled the gear so if one piece failed, I would not be looking at a ground fall. I checked the cache loop (slack rope between the pack and device at my waist) to make sure I had enough rope out for the traverse. A bomber nut in the crack behind the large flake gave me confidence for the overhung move. Before I knew it, I was standing on the final ledge placing protection. I finished the climb and pushed into the woods to rig an anchor so I could rappel and clean the gear. It was 3:00 PM.

I remember feeling relieved, satisfied, and happy that I had overcome the feeling of dread I experienced on the first top rope lap. I named the route Luceo Non Uro or “shine not burn” (5.8+ / 80’)—the motto on my family crest badge. In all, the line was aesthetic, interesting, and has a view to die for—well, not literally.

I can’t say that I want to push the grade while rope soloing, at least not on lead, but it was a rewarding experience. I was in no rush to exit so, after packing up, I bushwhacked across the valley to Marcy’s cliffs to watch the sun on Haystack’s flank. A 5:30 exit put me back at the car around 9:30 after 17+ hours.

IN ADDITION, there were virtually no blackflies. 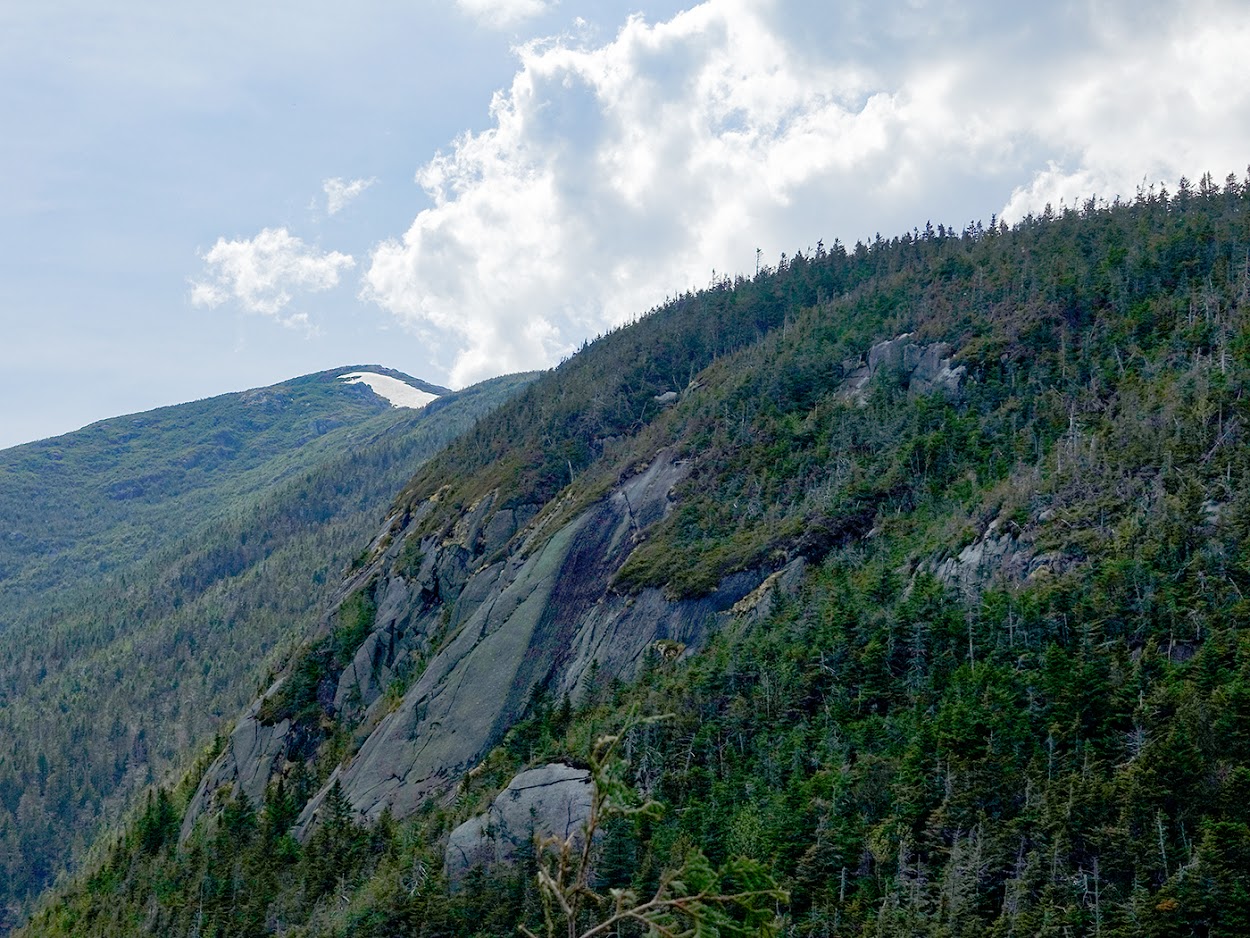 Fast-motion video of the easy section just to give a feel.

Most interpretations simply put it at "I shine, not burn."
I just posted that translation based on a conversation on a clan MacKenzie group. Adding the "o" to the end of the words puts it in the first person. Another conversation puts "virtute et valare" before "luceo non uro" which adds more context to the "I shine". That all said, I'm not a language expert since my high school Latin generally fell on deaf ears ;) ...though I regret that with age.