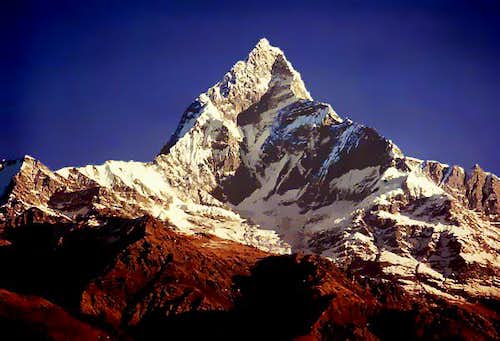 This spectacular peak, off limits to climbing due to its religious significance, is dubbed the fishtail mountain because of its distinctive summit feature. Dominating the region near Pokhara, it's striking features have attacted the attention of trekkers, photographers and "illegal" climbers, from all over the world.
Note: This peak is illegal to climb and it is not the intention of this page to encourage illegal climbs in this area, only to inform what is known about this peak and the surrounding areas you are allowed to visit. 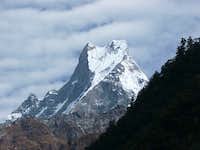 To get to Nepal you will have to fly from either India, Thailand or Singapore.
To get to New Delhi India try (there are many others).
Air India
British Airways
Air France
Air Canada
Kuwait Airlines
Qatar Airways
Lufthansa
KLM
Royal Air Nepal

Once you get to Katmandu you will have basically two options:
Bus or Fly to Pokhara in west Central Nepal.

Someone in the 1950's tried to climb Machhupuchare. When he did not summit stopping 300 feet from the top. He returned to the King. The king decreed that the climber was unsuccessful as the lord Shiva lived on the peak and from that time on no climbing permits have been issued nor will ever be given to climb Machhupuchare (FishTail).

First ascent
Author: danmerrick
Date: Aug 17, 2002 09:29 AM
On May 20, 1957, Wifrid Noyce, who had been on the 1953 Everest team, turned back 150 feetbelow the summit. This expedition is chronicled in Noyce’s book “Climbing the Fish’s Tail”. If youcan find a copy of this classic expedition book, it is well worth reading. (checkwww.bookfinder.com) This is the only documented climb of this peak and as I recall, it is largelydue to the efforts of Noyce’s team (lead By James Roberts) that Machhapuchare has remained unclimbed. Roberts Lived in Pokhara until his death in 1997. It is said the he suggested to the King of Nepal that the summit be preserved.

Machhapuchare Climb
Author: Damien Gildea
Date: Aug 18, 2002 01:20 AM
It is well-known and accepted within certain climbing circles that Bill Denz - an exceptionally strong NZ climber - illegally climbed Machhapuchare in the early 80s. Denz had soloed many extremely difficult routes in NZ, Alaska, Patagonia and the Himalaya, so although his cultural sensitivity might be questionable, his ability to do such a climb is not. Unfortunately he was killled in an avalanche on Makalu in 1983, so we may never know all the facts for sure. He also made an illegal approach to Menlungtse around the same time, but did not actually climb it, as far as anyone knows. It was finally climbed by Slovenians in 1991.

Machhupuchhare has been saved from environmental destruction for the benefit of the people of Nepal, particularly the Gurungs, to whom the mountain is sacred.

There is another mountain of around 6,100 meters nearby. Pisang Peak is a ‘trekking’ peak for which permission is obtainable.

information from juh33
Actually Pisang is just under 6100m, and there are a lot of other 'trekking peaks' that are far closer to Machhapuchare. The closest by far is Mardi (or Mardi Himal) which is practically under Machhapuchare and only a few miles from it.

Back in 1979 when I was there it was a religious peak therefore no summiting allowed as to not disturb the gods. This has not changed. 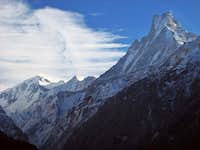 There are may camping spots in the region. While people in general are friendly as are most Nepali. Theft was a constant worry near Tibeten refugee camps outside of Pokhara.

There are several organizations dedicated to helping the Sherpa community. Here are just two. Should you wish to contribute to this worthwhile cause contact either of the following organizations though the information below.