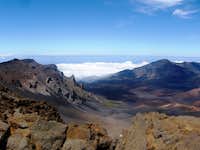 Maui is arguably one of the most beautiful, diverse, and scenic places on Earth. Its two main peaks offer many opportunities for hiking, climbing, and exploring. Haleakala and the West Maui Mountain are the two volcanoes that make up the island. Several smaller cones and cliffs on these volcanoes offer other climbing challenges. The high point of the West Maui Volcano is Pu'u Kukui at 5,788 feet. Haleakala reaches 10,023 feet.

The following peaks have pages on SummitPost.
Haleakala
Pu'u Koa'e

Check the National Park Service News Page or the Maui News for updates on road closures or other relevant news prior to travel.

The island of Maui is one of a chain of volcanoes and ancient underwater seamounts stretching nearly to the Aleutian Islands of Alaska. The Hawaiian Islands and Emperor Seamounts were all formed by a hot spot in the earth's mantle erupting onto the ocean floor and building massive shield volcanoes that would sometimes break the surface. Maui is the second youngest island in the Hawaiian Islands and consists of two volcanoes in the chain, usually called West Maui Volcano and East Maui Volcano or, more commonly, Haleakala.

It is thought that West Maui Volcano was born 2 million years ago. It is now extinct and has begun the slow process of subsiding and eroding back into the sea. Haleakala is about a million years younger than its neighbor and is still considered active having erupted at least 10 times in the last 1000 years. However, it has entered the last phase of its life as a growing mountain, a last gasp rejuvenated phase that all Hawaiian volcanoes enter before they go extinct forever.

Maui has been blessed with a great diversity of flora and fauna, including some species found nowhere else on the planet. Because of Maui's diverse climates, you can see anything from cacti to a rain forest orchid blooming on the slopes of its two volcanoes. Before man, every plant and animal species had to be brought to the island across the wide Pacific by wind, birds, or ocean currents. Since man's arrival many species of plant and animal have arrived, some doing irreperable damage.

The two species most associated with Maui are no doubt the Nene, or Hawaiian Goose and the Ahinahina or Silversword.

The Nene is Hawaii's state bird. It can be found on the rocky upper reaches of Haleakala. It was very near extinction in early 20th century but has rebounded somewhat thanks to conservation efforts. Even still, there are thought to be only about 800 of these birds in the wild. Do no feed the Nene if you encounter them. They will beg for food, and feeding them only increases the chances they could be hit by a car (which happens far too often). 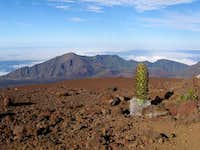 The Silversword is an endangered plant found far up Haleakala. The silver hairs that give them their color help them retain moisture protect them from the sun at the high elevations they live at. Silverswords live for up to 50 years, but only bloom once before dying. Consider it a special treat to see one of these in bloom. For a long time people came to Haleakala and would take a silversword for a souvenir or for some decorative purpose. Grazing livestock also decimated the population. It is estimated that the population was as few as 100 plants at one time. The population has rebounded but be careful not to walk around these plants as their roots may be damaged. 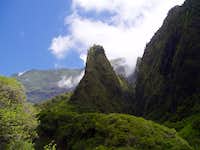 It is difficult to explore deep into the West Maui Mountain due to its rugged nature and thick vegetation. Some of the valleys can be explored however. The Iao Valley is the easiest to reach due to the road and park there. This valley is thought to be a remnant of West Maui's caldera. The Waihe'e Valley also has trails in the valley and along a ridge overlooking the valley. Arguably, the best way to see West Maui Mountain is by helicopter. Several companies offer tours on the island. For a more up close and personal look at the mountain, you may want to drive completely around it on Routes 30 and 340. Along this drive you will encounter Kahakuloa Head and can explore Pu'u Koa'e, an eroded volcanic cone. This link has good information about this drive.

Haleakala is somewhat easier to explore due to it being a younger mountain, and the fact that a large portion of it is part of a national park. See the Haleakala Summit Post page for more details.