Mexican Hat is a 60 feet wide rock which lies upon a much smaller rock which gives it the look of a Mexican Sombrero made of stone. The rock is located in the southeast part of Utah near well-known Monument Valley. The rock has two main routes which can be climbed: The Royal Robbins and The Bandito Route. Both routes are worth the effort. The Bandito Route is most popular and is graded A1. The more difficult Royal Robbins route is graded 5.6 A2 R

Some history behind the formation and both routes: Royal Robbins climbed up the north side Of Mexican Hat trough a scary crack in the sixtees and found a stack of rocks on top! There is an old archived photo of the late Norm Nevills and his wife Doris on the summit! Supposedly Norm leaned some type of rigid plank and shimmied up to the top! The great part is that he talked his wife into following him.

Later a renegade climbing group who called themselves The Banditos, drilled bolts up the south face providing an "easy" way to the summit.

The views from the Hat are great. You can see the valley of the Gods, Monument Valley, San Juan River and the Comb Ridge Anticline, a beautiful geologic feature.
Also interesting are the relics in the summit cairn.

How to get there MAP

Mexican Hat is located on Hwy 163, 24 miles west of Bluff in Utah. It has a few small motels, a private campground, a few restaurants, service stations and some gift shops. Take a look at the Map to see how to get there!
The Mexican Hat on the Map is the village, not the rock! The rock itself is located 3 miles north of the village. A 'scenic' route goes from the village to the rock.

When driving on the Hwy 163, you can see the Mexican Hat. A small road leads to Mexican Hat. Unfortunately this road isn't paved. It's a little dirt road, so check if your vehicle is up to it, because the road has a couple of hills in it which can get your car stuck in the sand, (it almost happened to our car too!) so watch out! 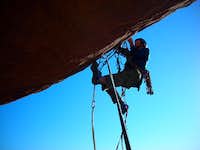 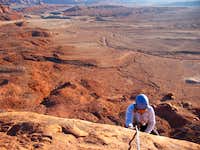 Beautiful desert views from the Hat

It’s a nice walk up to  Mexican hat, with a little hiking you can get just under the Hat.  From all angles you can climb up there quite easily. To get on the actual Hat there are two main routes:


The Bandito Route (A1)
This is the normal and easiest route up. There are bolts in the rock which you can 'follow' to the top. The route is overhanging. When hiking to the base of the hat, just look for the bolts,they are easy to find, when you find them, you know you are on the Bandito-Route.

What to take
A few biners and aid climbing hardware is all you need-the route is a bolt ladder. A stick clip is useful for the first bolt, but you get full redit if you clip it by standing on your belayer's back
Note that some of the bolts might be loose! So watch out!

What to take
Pins, cams and stoppers 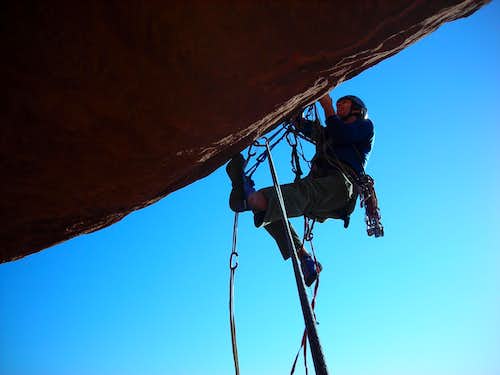 Making the second clip on Bandito Route by rpc
Hotels: 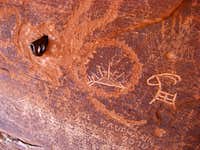 Blanding:
Blanding is a small town of 4,000. It is home to a small state park featuring ancient Indian artifacts, but serves mostly as a stopping off point for travelers in the area

Bluff:
Bluff is a tiny community that serves mostly as a base for those running the San Juan River and traveling in the region.

Monument valley very closeby
Monument Valley:
Monument Valley is an area of exceptional free standing red rock monoliths that rise up to 1,000 above the desert floor. The landscape they create is truly majestic, a fact documented by the numerous Westerns that have used it as a backdrop.

Click Here For the Weather in Mexican Hat, Utah

You might want to add Valley of the Gods, Goosenecks State Park, and Moki Dugway as nearby attractions.

Re: Additional Nearby Attractions

Thanks for the info. I will update the page.