Mica Peak looms to the east of Spokane south of Interstate 90 near the Washington/Idaho state line. It is easily identified by the spherical white dome at the summit, an FAA radar station. The peak affords excellent views of Spokane as well as the Palouse.

It is relatively easy to get lost on the logging roads higher up if you don't have a map. Although within view of civilization, the top of the mountain is rather remote, so take the necessary precautions based on the conditions.

Mica Peak is at the southern end of the Southwest Selkirk Range. The entire Selkirk Range extends from Mica Peak north well into Canada.

There is a Mica Peak (5241') in Idaho which is a few miles east of the Mica Peak in Washington. It is said to have a nice view of Lake Coeur d'Alene as well as Spokane. It is believed that the Idaho peak is on private property and is not open to the public. The author has spoken with someone who climbed the Idaho peak with a group of Boy Scouts but was accosted by a caretaker on the way down (apparently they have video cameras up there). The author has driven to the end of the road near the Idaho Mica Peak (Signal Point Road) and was greeted by a bunch of No Trespassing and No Parking signs. The Idaho peak is also known as Shasta Butte. There is a minor rock outcrop at its northern summit. Trip Report for Idaho Mica Peak

The hike begins at Liberty Lake Regional Park in the city of Liberty Lake, Washington, midway between Spokane, Washington and Coeur d'Alene, Idaho. Follow these directions to get to the park. Don't drive in the gate--there is a dirt parking lot to the right of the main entrance gate marked "Hiker Parking". Park here, then walk in the main gate and through all the campgrounds to the south end of the park, where the trail starts. The park is closed in the off-season (cold months) but parking outside the gates is still ok year round, day or night. 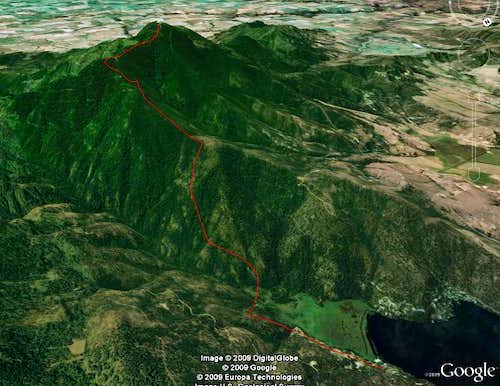 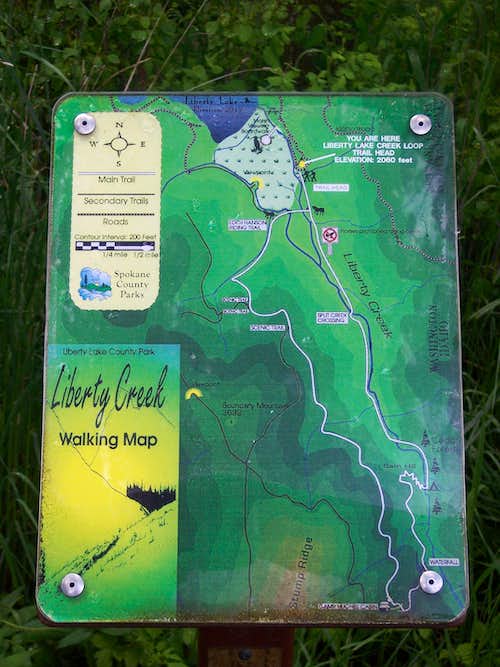 Liberty Lake Regional Park. The peak is not on this map--it is off the bottom left corner. You'll probably want to look at the full size version of this image in order to understand the first parts of the Boundary Mountain or Hughes Cabin routes.

Boundary Mountain Route: The one-way distance is approximately 6.5 miles, with a 3200' elevation gain.

The route is mostly on logging roads which are not open to motor vehicles. The trail is manageable for mountain bikes and should not be too much trouble except for a few steep spots. It is also suitable for winter hiking--an ice axe should not be necessary. Snowshoes would probably be nice.

Go south until the fork with the first trail that will take you west across Liberty Creek (fork right). This is the Edith Hanson Riding Trail. Go across the creek and continue on the trail (at 2100' you will be hiking on the Pack Trail as marked on the USGS topo) as it curves uphill and to the left (southerly).

The trail will climb. After a while there will be a post with a map on it on the left side of the trail. About 100 feet south of this map the trail will fork--take the right fork. On the Liberty Creek Walking Map this is the trail that takes you towards the saddle south of Boundary Mountain. You are still following the USGS Pack Trail route. This will take you up a rather steep incline.

Near the top of this incline you will encounter two sets of bumps and trenches which seem to be intended to stop motor vehicles. Then you will be in a saddle at 3500' just south of the bump marked 3632' on the USGS topo (Boundary Mountain on the Liberty Creek Walking Map). Take the south route at the three-way junction here. The road leading north goes to the 3632' bump (decent view, partly obscured by trees).

After proceeding south you will soon find yourself at another junction. Take the right branch. Note: The Liberty Creek Walking Map does not show the exact junction arrangement that exists in this saddle. There are two junctions separated by a short stretch of dirt road, not one four-way junction. 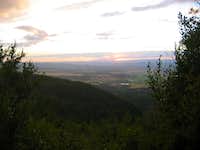 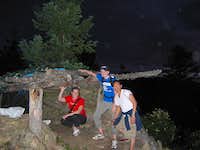 There is an interesting mountain man hut made of some logs and branches at a bump on the ridge, elevation 4760', around where the Pack Trail becomes the Jeep Tr. It is off the main trail--there will be a side trail going to your right which will take you about 100 feet through a dense grove of trees to an exposed area with the hut offering a nice unobstructed view to the north and west. You should be able to spot the white dome at the peak from here.

On the main ridge, go southwest on the USGS Jeep Tr, which eventually becomes dirt roads. You will encounter some junctions as shown on the USGS map--just stay on the ridge or go with whatever road climbs more steeeply.

You will know you are close when you find yourself on a wide and well-maintained dirt road. Before long the FAA radome will be staring down at you. The summit (5205') containing the USGS survey marker is a rock pile just south of the radar station. Mica is evident in the soil here.

Hughes Cabin Route: This route starts at the same location as the Boundary Mountain Route, and is a similar distance. Hike to the Camp Hughes Cabin (you may use either leg of the loop, although the author recommends the Liberty Creek leg because of the scenic waterfalls). Just east of the cabin there will be a junction with a trail leading south, marked "More Hiking". Take this trail. The author has attempted this route, but it did not go smoothly. The peak was eventually reached, but only after quite a bit of bushwhacking. The author believes that there really is a way that goes on logging roads, and if anyone could come provide this information, he would gladly post it here or add them to the editors of this page so that they could share their knowledge.

Belmont Road Route: This is a route from the west which does not start at Liberty Lake Regional Park. See the Climber's Log. The author knows nothing more about this route.

Liberty Lake Regional Park charges no fee for hiking if you park outside the park entrance as stated above.

Most of the land outside the regional park is owned by the Inland Empire Paper Company. A permit is necessary to hike on their land. See http://www.iepco.com/recreation.htm.

Camping is seasonally available at the trailhead at Liberty Lake Regional Park.