Mont Blanc via Grands Mulets and skiing the north face 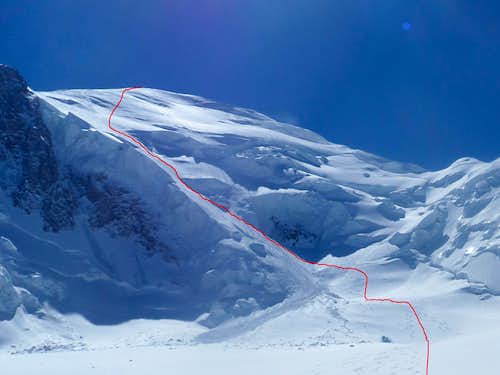 The Grands Mulets route is the classic way of doing Mont
Blanc on skis. The terrain is perfecct of 'skinning-up' on skis and the
sustained slopes provide a wonderful descent. Most skiers leave their skis at
the Vallot shelter and climb the Bosses Ridge in crampons. The bosses Ridge is
not usually very pleasant to ski, as the snow is generally wind-packed and the
descent is very exposed. Only extremely good skiers who intend to do a direct
descent of the North Face take their skis to the top. Depending on the weather
and snow conditions, Mont Blanc can be skied as early as March. And the
descent, which can seem verly long an tendinous on foot, becomes a real
pleasure on skis. Although it is not particularly difficuclt to ski Mont Blanc,
it does requier a certain amount of ski touring experiene. Some sections can be
quie trikcy (crossing the Pierre a l'Echelle, winding through the seracs
at La Jonction, skiing the crevassed
slopes of the Petites and Grandes Montees and skiing at more than 4000 m.
requiers a good pair of lungs and strong thighs!

From where you arrive by cable car at the Plan de l'Aguille,
the ski track usually goes down about 10 meters into a small bowl which runs
alongside the right bank of the moraine of the Pelerins Glaccier. Go up the
glacier for a short distance, and then traverse around the foot of the Aguille
du midi (at around 2500m). go above (2560m.) the disused cable car station at
Les Glaciers and descend slightly as soon as the Bossons Glacier is reached
(2525m.) This traverse can be quite difficult if snow conditions are poor. After that comes the La Jonction, a very crevassed terrain. After crossing this you've to skin one slope more till you reach the hut. The via ferrata to the hut is fairly easy. 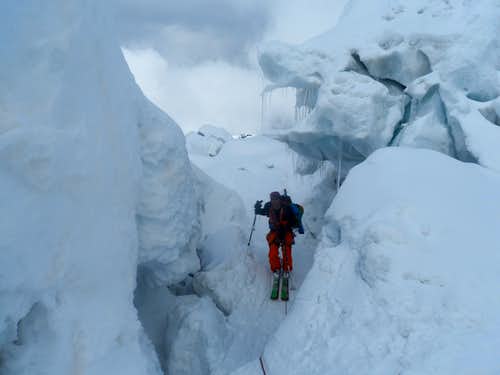 From just below the hut, cross the slope (towards the
south-west), and then, at around 3155 m. , climb a steep slope (known as the
Cote des Cerisiers or the Petites Montees) to get to the petit plateau (3650
m., 2 hrs).

Falling seracs make the petit plateau a dangerous place. To
minimise the risk, you must move as quickly as possible until you are out of
the danger zone (the crossing should take no more than 30 minutes). 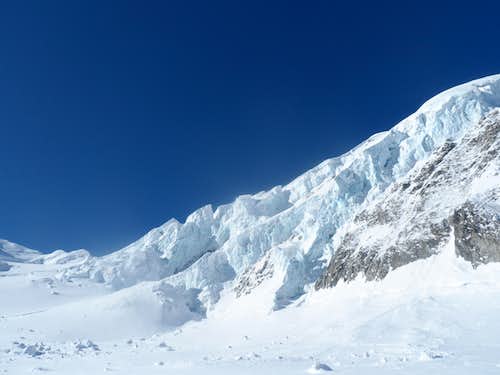 From the petits plateaux, go up a seond steep slope, Les Grandes Montees, at the top of which there is often a wide crevasse. Cross the
Grand Plateau. The route curves round to the south-west to join the Gouter
Route between the Col du Dome and the Vallot shelter. After that it's a long and though climb over the Bossos ridge to the summit, which will take a few hours. 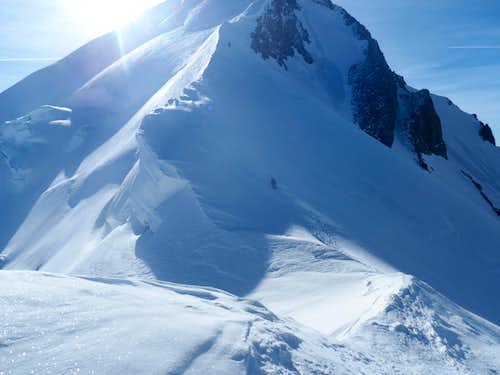 Me skiing in the north face of Mont Blanc

A return cable car trip from the plan de l'aguille can be avoided by descending directly from the disused cable car station at les
glaciers to the tunnel entrance.

Uploading pics on summitpost doesnt work fine for my so I did put them on my own website.
Trip report and gopro video: http://woutmartens.com/mont-blanc/

There already exists a route page for this: Grands Mulets, Normal. It's not a great page, but it's SP policy that there must be no more than one page for a route.

Therefore I suggest that you change your page to a different type, such as a Trip Report or Custom Object.

Thx for helping me out @rgg.
I'll change my page.
And I'll try to add some info on the other page.

Is it possible to add some info on the other page, because I don't see how?

PM the current owner and see if he will let you share the page. You have a lot of good info to share on the page.