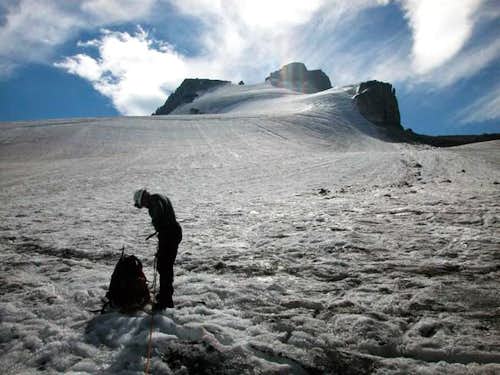 Mt. Hector is named after James Hector who was a figure in the construction of the Canadian Pacific railway line throught the Canadian Rockies for Calgary to Vancouver.

Mount Hector stands high and proud to the north of the Lake Louise area. While mountains on the west of the Icefields Parkway are almost as high, they are closely grouped in this respect, Hector stands alone. Mount Hector's large, steep southern aspect gives it the awesome appearance.

This is briefly explained in Scrambles in the Canadian Rockies by Alan Kane.

Mount Hector sees traffic all year around. In the winter, it is a great ski mountaineering ascent. But beware of avalanche hazards. The view of the Wapta area and of the Lake Louise group is amazing.

From Calgary take the Trans-Canada highway to Lake Louise. Here switch to the Ice fields Parkway. After about 20 k you will see a roadside pullout on the left. From here you will be standing below Andromache and also see Little Hector a pointed peak to the south. Cross the road and head up a small slope and follow a path along the left hand side of the Hector creek bed. After about 100 yards you will cross the creek on an old rotting log bridge. Here turn left. (Do not go straight) Follow the trail which now follows the right hand side of the creek. It will lead you to a series of cliff bands with waterfalls. At this point you should cross the trail to the left hand side and scramble up the cliff bands which are not that difficult.

Eventually you will find your self in a small bowl. Proceed to the centre right and you will be heading to Mt. Hector via the north glacier. Keep right and follow the least line of resistance to the edge of the glacier. Crampons, helmut, rope and harness should be used from this point on. While the cravasses can be easily skirted there are many and deep. They may be snow covered depending on the time of year. When you reach the top of the glacier, loose rock and rubble is the order of the day. Follow the crumbling ridge to the summit for excellent views of the surrounding peaks. Little Hector, Andromache, the Wapta Icefield and Hector Lake are just a few. Down climb the same way you came up.

This very well explained in Scrambles in the Canadian Rockies by Alan Kane. This book is a worthwhile purchase. 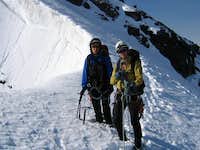 Backcountry wilderness permits can be purchased in Banff or Lake Louise. 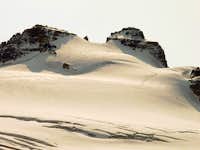 In good snow years crevasses are filled in, making travel much easier. Be wary of poor bridging in bad snow years, especially in the following spring.

Summer ascents are easier earlier in the season, as the snow melts there is more travel on the ice.

There are avalanche warnings in the gully with the cliff bands leading up through Hector creek. Proceed with caution in snow seasons.

Camping is permitted at the Lake Louise campsite only.
There can and are campfire restrictions depending on the weather.

There are some excellent hostels located along the Icefields Parkway.

If your seeking information on route conditions call the Lake Louise Warden office @ 403-522-1220.

In Mar 2017, two snowshoers were caught in an avalanche and were buried in 6-10ft of snow. They were just 10 minutes from the trailhead, the avalanche warnings at the time were "high."