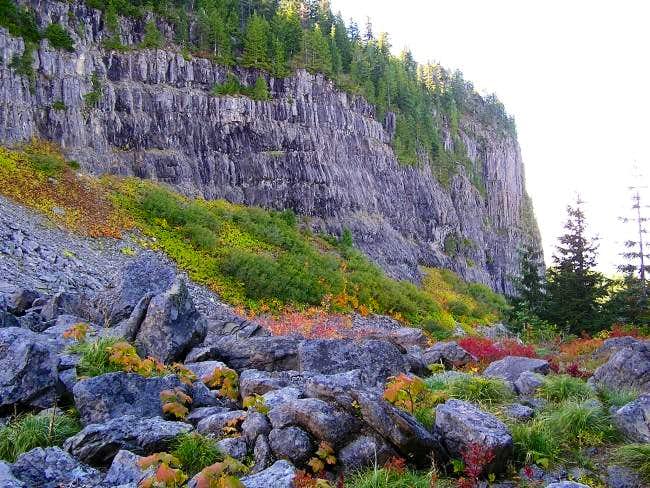 About 50 miles south of Portland lies the Table Rock Wilderness, over 6000 acres that were designated by the National Wilderness Preservation System in 1984. It's a good thing too because the surrounding mountains in this part of the Old Cascades are private industrial forest land and clearcutting is widespread. Most of the old growth trees were wiped out in the 1880's fires but pockets of 400 to 600 year old forest still remain in the TRW.

The formations from the lava flows that created this area have been carbon dated to about 15 million years ago. The area is characterized by basalt cliffs and rock outcroppings. Table Rock is the highest point in this wilderness. Nearby Rooster Rock (one of many formations in Oregon with this name- click here and here to see others) appears as a arched fin to the south. Table Rock Wilderness is home to several species of endangered flora and fauna such as Gorman's aster, Oregon sullivantia and the northern spotted owl.

There are two trails that can get you to the summit. The normal one is the 3.6 mile Table Rock Trail that starts along an old forest road but then criss-crosses below cliffs and then up to a saddle to the final trail to the summit. You can also get there from Rooster Rock along the Saddle Trail from there. It's a popular trail, especially on the weekends, so please pack out what you pack in and if you can, pack out any trash left by others.

The hike is pretty tame but the views are extraordinary with 10 Cascade volcanoes able to be seen from Rainier to South Sister and everything between. The Coast Range can be seen to the west. 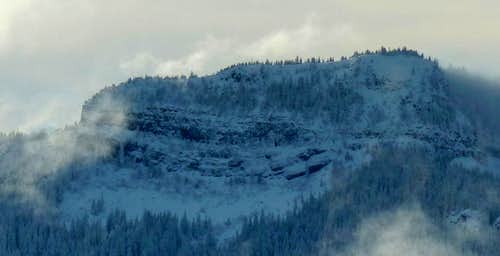 From Portland, you can get there one of two ways, either from the west (Woodburn) or the north (Oregon City). From Oregon City, take exit 10 off I-205 south to Molalla on Highway 213 and turn left towards Estacada on Highway 211. Go a half mile and turn right onto S. Mathias Road. Go .3 mi and turn left on S. Feyrer Park Road. Go 1.6 mi and turn right onto S. Dickey Prairie Road. Take this 5.3 miles to S. Molalla Forest Road (it's not marked will but it is the bridge to the right that crosses the Molalla River). Take this road, nice and paved, for 12.3 miles to a point where the paved road forks right and a gravel road goes left. Guess what? You're taking the gravel road left. (There is a sign here that identifies it as the way to the Table Rock Trail) From here, basically follow the signs 7 miles to the trailhead. There are two more forks in the road with signs to get you there. Park at road's end at the trailhead.

If you want to access this from the west, take the Woodburn exit off I-5 where the Woodburn Outlet Stores are and head east on Highway 211 to the junction in downtown Molalla with Highway 213 and follow the same directions from there.

None! No fees or permits needed.

Usually Spring to Fall but if the roads are snowfree, you could do it in Winter.

Along the paved road from the bridge on the Molalla River, there are designated improved camp spots too that are well marked with parking areas, picnic tables and fire rings. Be wary on these though as it appears at some of them the campers have been there for a while. There is a 14 day limit at the sites but I would not be surprised if those that were there have been there on a more permanent basis. If you stay at one of these and you hear banjos in the forest....run!