With the possible exception of The Golden Hinde, Mt Arrowsmith is likely the best known mountain on Vancouver Island, BC, Canada. This is hardly surprising given the fact that it presents an eye-catching spectacle from the main Island thoroughfare, Highway 19, all the way from Nanoose Bay to Qualicum when driving north or from as far away as Courtenay when heading south.

Arrowsmith is situated just east of the head of the Alberni Inlet between the Englishman and Cameron River watersheds in a region where the distance from tidewater on the Pacific to that on the Strait of Georgia at Parksville is a mere 40km. Unsurprisingly the mountain makes its own weather and, in winter in particular, enjoys a reputation for “Scottish” conditions. Although not as high as some of the Island mountains to the north, “Arrysmith” has been and continues to be venerated by generations of Island climbers as a training ground, for its abundance of sporting bluffs and gullies and for its history. Just about every route on the mountain can be undertaken as a day trip from cars.

Claims regarding the first ascent are ambiguous and could be ascribed to the Macoun party of 1887 or to that of Fletcher et al in 1901. There is even a claim that it is due to Edward Whymper (of Matterhorn fame) in 1905. In any event, the mountain, probably because of its visibility, attracted the attention of even the earliest visitors to the Island to the point, in fact, when in 1910 the CPR considered it worthwhile to build a tourist chalet at Cameron Lake and organise guided trips up the mountain by pack horse to an overnight hut at 4,200 feet on the slopes of the neighbouring Mt Cokely. The original CPR pack trail is still in use over 100 years later. Perhaps the most famous of the early ascents came in June 1925 when, although they didn't reach the summit that day, Phyllis Munday handed her husband Don a pair of field glasses and “pointed to a tall mountain due North through a cloud rift." This was the Munday’s first sight of what they called the "Unknown Mountain". It was, in fact, Mount Waddington, the elusive summit that was to preoccupy them for the next eight years of their incredible climbing careers.

The formal status of the Arrowsmith massif and the surrounding area has always been ambiguous. The availability of valuable timber has meant that successive governments have leased rights to a number of companies, not all of who have been overly concerned with protecting either the locale or recreational access to it. Several commercial ski operations have been attempted on Mt Cokely but all have been short lived. For the recreationist, of course, all this has had the happy consequence of improved access and for many years climbers, hikers, skiers, botanists etc enjoyed convenient access to what had become a de facto park. Although designated a UN Biosphere Reserve in 2000 the region still had no formal protection from commercial exploitation. This has continued to the present and recently has resulted in road closures and even the threat to log one of the most popular routes on the mountain, the Judges Route.

In order to obviate this and all future threat, the Vancouver Island section of the Alpine Club of Canada (ACC), as part of its centennial project, and the Federation of Mountain Clubs of BC made it their goal to obtain official park status for the Arrowsmith massif in 2006. These things always take longer than anticipated to achieve of course. Nevertheless, on November 26, 2008 the status of Regional Park under the aegis of the Regional District of Nanaimo was conferred upon the Arrowsmith massif. The permanent protection of this important and historical resource would seem, therefore, to be assured.

Vancouver Island can be reached by air from Vancouver to Victoria, Nanaimo, Comox or Campbell River and by ferry from Port Angeles to Victoria on The Coho and on BC Ferries from Vancouver to Victoria or Nanaimo. Public transport on the Island is relatively poor and anyone arriving by air would be advised to rent a car. Access in this case requires the use of gravel logging roads. Whilst these are often negotiable in a normal 2WD sedan, some sections are rough and in winter, of course, all bets are off. If you have access to a high-clearance 4WD, bring it along.

From the Island Highway 19 near Qualicum or Parksville, take Highway 4 west towards Port Alberni. Drive along the south shore of Cameron Lake, through Cathedral Grove Provincial Park and over the low pass, Alberni Summit. Just west (~1 km) of Alberni Summit watch for a left turn on to gravel. Set your trip meter to 0 here. You are now on Summit Main. Drive down Summit to its junction with Cameron Main and turn left. Go along Cameron for several kilometers noting where it crosses the Cameron River. Approximately 1km after crossing the second bridge, you will reach a junction. Cameron Main goes straight on. You want to bear left and uphill on Pass Main. The road ascends quite steeply and is narrower and a bit rougher than the valley main line.

Once on Pass Main count the logging road spurs leading back against the mountain on the right. At km 12.8 you pass the third spur. This gives access to the Lost Gully and Un-Judges routes. At km 13.3 on your trip meter, park at the pullout on the opposite side of the road and slightly uphill from the fourth spur. This one gives access to the Judges Route. Proceeding uphill on Pass Main, at km 15.9 you reach the top of the last of a series of switchbacks. From this point the Main Snow Gully and West Ridge routes go down into a draw then up through the forest. Beyond the switchbacks is a straightaway that leads to a hairpin bend protected by concrete crash barriers at km 17.8. Park here for access to the Arrowsmith/Cokely Saddle and the Bumps/Nose route.


Refer to the Island Alpine guidebook – see “Suggested Reading” below.

When conditions are suitable, several areas on the Arrowsmith/Cokely massif set up excellent ice routes. SP member Stickit has recently set up a separate page, Arrowsmith Ice, on which he has added several routes.

Summit routes of all kind will continue to be reported on this page. If you don’t find your route here, please check Stickit’s page for sport routes in the area.

Given the successful negotiations regarding protection of the massif inside the new park, some formalities may eventually become necessary. At the time of this latest update, however, there are no red tape issues to consider.

As with any well planned back country trip it would be prudent to have left a detailed trip plan with someone responsible. The RCMP and the appropriate SAR agency will respond in an emergency but it is up to you to have the mechanism in place that will initiate call out.

There is good cellular reception from most places on the Arrowsmith massif, particularly on the east side.

There is no restriction on camping that I am aware of. I have seen tents on the Arrowsmith/Cokely Saddle and below it by Emerald Lake. The only limitation would be availability of water. Giardia is well documented, so boil or treat all water. Pack a small stove for cooking and don’t light campfires.

Since Arrowsmith is such an historically important mountain, first time visitors will get the most out of their experience by fully immersing themselves in all the mountain’s lore beforehand. In this regard I highly recommend Beyond Nootka – A Historical Perspective of Vancouver Island Mountains, Lindsay Elms, Misthorn Press, 1996, ISBN 0-919537-29-4

For more route information and even more routes refer to Island Alpine – A Guide to The Mountains of Strathcona Park and Vancouver Island, Philip Stone, Wild Isle Publications, 2003, ISBN 0-9680766-5-3 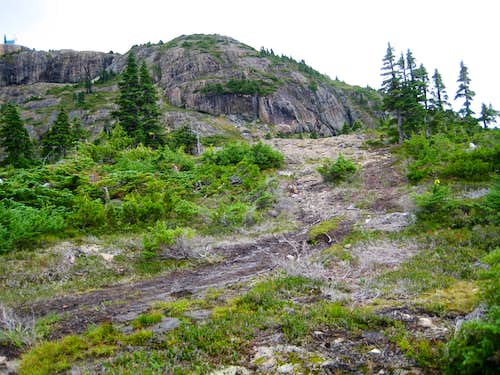 ATV damage on Mt Cokely. Please help us to stop this by reporting violations
Protection of the massif is key to the recovery period that the area so badly needs. However, it continues to be continually trespassed upon by people driving snowmobiles, ATV’s and even “monster trucks”. Pollution of the air and soil by fumes, fuel and oil is amongst the least of the insults that these neanderthals visit upon the area. If you’re stupid enough to think that motorised transport is acceptable in such a place, you’re of the same limited mindset that thinks that ripping up delicate alpine flora, terrorising fauna and leaving your garbage everywhere is OK too. I’ve even heard the opinion expressed that ripping up the alpine is no problem since it will soon recover!

The fact that idiots like this simply won’t listen to reason is part and parcel of why the massif was given protected status. Taking a snowmobile, ATV or truck beyond the parking lot at the bottom of the old ski hill or off Pass Main up the Rousseau Chute or anywhere else on the massif is now illegal. Yet it continues. In the near future the Government of BC will implement licensing of ATV’s and snowmobiles. These vehicles will be now be readily identifiable to the authorities in the event of illegal use. I urge anyone who witnesses unlawful use of mechanised transport on the massif to do all they can to obtain photographic evidence, report to the RCMP or call 1-877-952-RAPP (7277) to report the licence plate numbers of irresponsible operators.