Tecate Peak is a prominent landmark mountaintop overlooking Tecate, Mexico, and even featured on their iconic beer cans. However, the peak lies barely over the border, in the United States. Because of its height and prominence, it is a natural location for summit towers and a perch for the Border Patrol to keep an eye on things. There is a solid hard-pack dirt road all the way to the top, which is open to hikers. Purists may moan about there being a road in the first place, but without the road, climbing this peak would be an awful bushwhack up rocky, brushy slopes. From the top, you get excellent views of Tecate and Tijuana, Mexico, and all sorts of peaks south, the ocean west of San Diego, and the myriad of summits in southern San Diego County.

From down low, a fast hiker can make the top in a little over an hour.  A round trip of three hours, going at a fast but pleasant pace, is very reasonable.

If you have the day to kill, you can walk into Tecate, Mexico (have your passport handy) and walk to the brewery. That's what this guy did.

From San Diego, get on state route CA-94 and head east into the hills. About 30 or 40 miles from the city, depending on where you started, look for state route CA-188, signed for Tecate. Follow this road south about a mile and a half. You'll see Tecate, Mexico, up ahead. Look for a sign saying "International Border 1500 Feet" and go right onto a dirt road immediately before this sign. Go right again at a Y-junction, and pass by a school. Follow the road a little, and it comes to a 4-way junction. Go right again, now heading west. You'll probably see some mobile flood lights and Border Patrol vehicles.

Stay on the road as it parallels the international border, sometimes to with about 100 feet. The road then drops into a depression and passes by a couple homesteads. Then it swings right and starts gaining the hills below Tecate Peak.

Depending on your vehicle and time and weather and general skittishness about being so close to the border, you can decide how far up you want to drive. The road is "not bad" and most high-clearance 2-wheel drive vehicles with a little power can get up this road. Some parts are a little steep and rutted, but it's not too bad, since the BP has to maintain the road nearly continuously.

If you want to make this a sporting hike, a good place to park is in a wide clearing near a concrete water tank, about a quarter-mile past the gate that spans the road. This gate will likely be open. From here to the top, it's about 4.5 miles, with about 1,800 feet of gain.

More than likely you'll run into the Border Patrol. Definitely say hi and make your presence known. That way, they know what you're doing and what your car looks like. 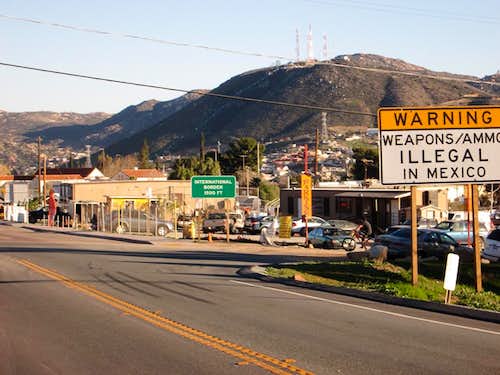 Look for these signs in Tecate, CA

If you can put one foot in front of the other and follow a wide road, then this is the peak for you.

Wherever you park, just walk the road to its end.

Going cross country up the slopes looks rough, since the slopes are covered in heavy manzanita and other woody scrubs. Parts are very rocky, and it's a safe bet that whatever isn't a sharp rock or plant is probably a snake. Just stick to the road. 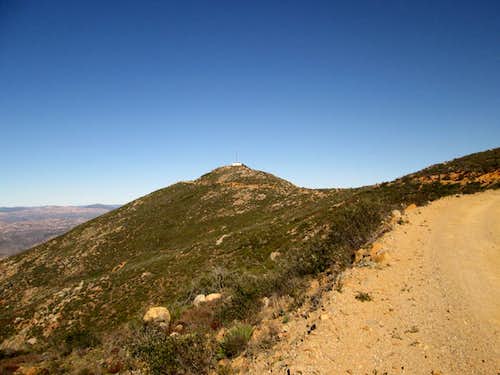 Tecate Peak up ahead!

There is no red tape. Just be cognizant of your surroundings.

Since the route is a road, any time of the year is possible. However, it gets very warm here, pushing 100 F (38 C) in summer, and there is no shade. Late fall through early spring is best. If it's going to be warm, either get an extremely early start, or perhaps start late in the afternoon, so that you are in shade for most of the way up the east-facing slopes. 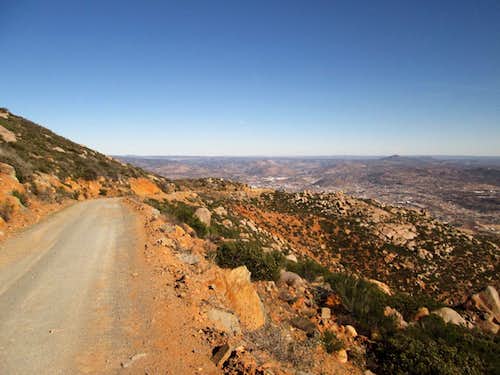 Tecate Mexico down below, watched over by a BP vehicle.

Camping somewhere near the road is discouraged. You'll be disturbed all night by the Border Patrol and their lights. The surrounding area is mostly privately-owned, so the best option for camping is at the Potrero County Park, in the nearby town of Potrero, about seven driving miles from Tecate. This campground features hookups for RVs, bathrooms with showers, hills in the area to explore, and tent camping. I should mention that the tent campsites are in a grassy park area. You can't pull your vehicle into the spot. Instead, you park nearby and walk about 50 feet to the designated sites.

If you're looking for a warm-up hike, consider Potrero Peak, about two miles to the west. It has a nice trail and doesn't take long. You get great views of Tecate Peak as well as other peaks in southern San Diego County and northern Mexico. 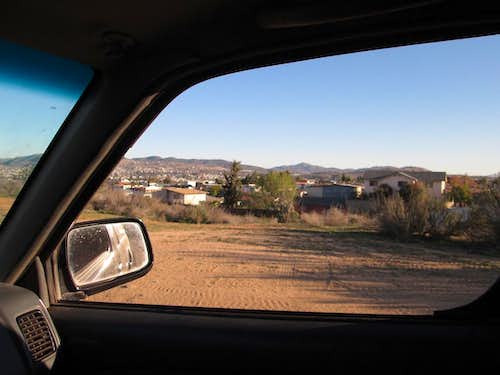 Mexico is just a stone's throw away.