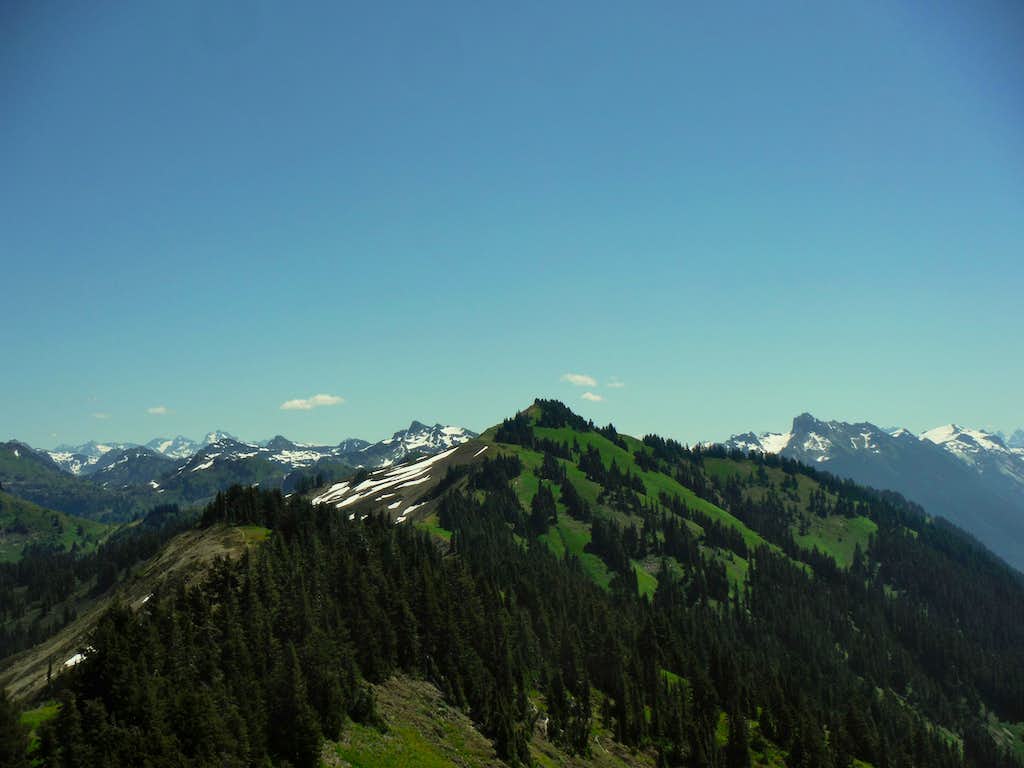 High Divide Peak from Excelsior Peak
The unofficially named High Divide Peak or Point 5930 as it is referred to on both Peakbagger and ListofJohn is the highest summit adjacent to the popular High Divide Trail in the North Cascades. The summit itself has 590 feet of prominence making it an official summit. Though hundreds go within two hundred feet of reaching the summit every year only a few actually do take the time to summit this peak. That is because there is only a faint boot-path coming up from the eastern ridge that leads to the true summit. On pretty much all maps this peak is not labeled which often deters people from heading to the true summit. There are maybe two spots for the true summit both which are in the dwarfed trees.

The peak is also overshadowed by it's small neighbor Excelsior Peak. High Divide Peak doesn't contain a true trail to the summit like Excelsior nor are the views entirely 360 degrees like Excelsior either. Because of these reasons most people will pick Excelsior and only peakbaggers will tend to summit this peak. Though the views are not 360 degrees like Excelsior there are views from the summit area looking in all directions. To the east lies good views of Larrabee, Tomyhoi, Icy, Ruth, Seifert and many others. To the south is Shuksan and Baker but you have to head off from the exact summit to really see the best shot of them. To the north lies the Canadian Cascades and the distant Coast Range which can easily be seen on a clear day. It should be noted that all 3 routes that go to this summit are basic hiking trails in summer. 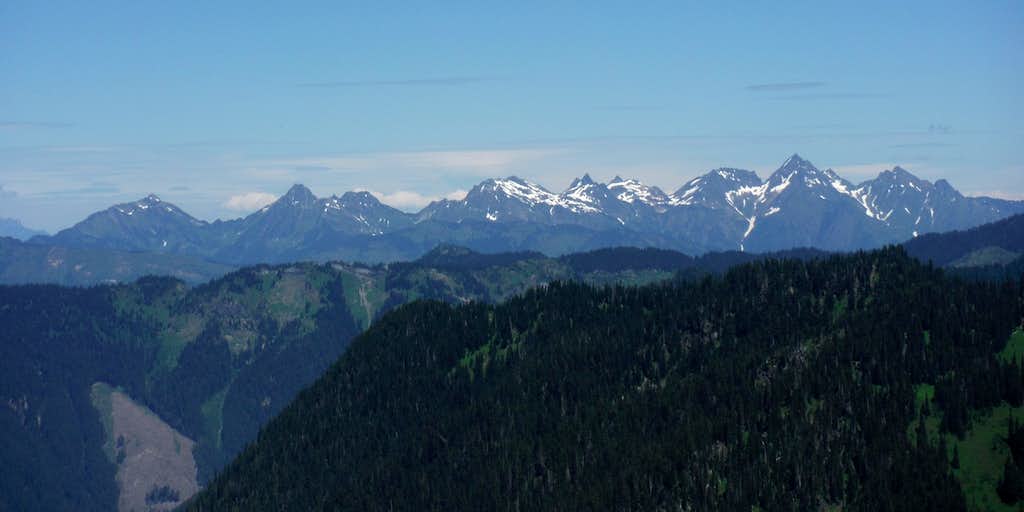 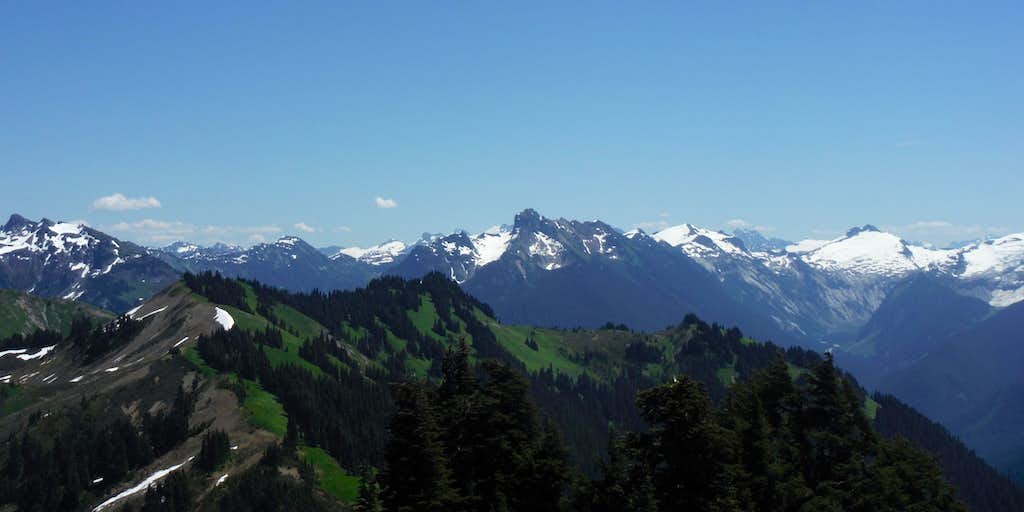 VIA DAMFINO LAKES: From Highway 542 east of Glacier, WA make a left on Road 31, Canyon Creek Road which is just after the Douglas Fir Campground. The road is paved for 7 miles, alternates between paved and gravel between mile 7-9 miles and is all gravel all the way to the trailhead. At mile 9 veer to the left whereas another road will lead you to the Bearpaw Lake Trail. At mile 14 veer left again and head uphill a number of switchback. Road 31 will be for 15 miles and it is rough in places due to potholes. High clearances vehicles strongly recommended. This road was closed for a long time but as of 2015 it is now open.

VIA WELCOME PASS: Take Highway 542 about 11 miles past Glacier. Make a left onto Forest Road 3060 and take this road to the end. As of 2015 this road has been reported to be rough but passenger vehicles have making it to the trailhead. 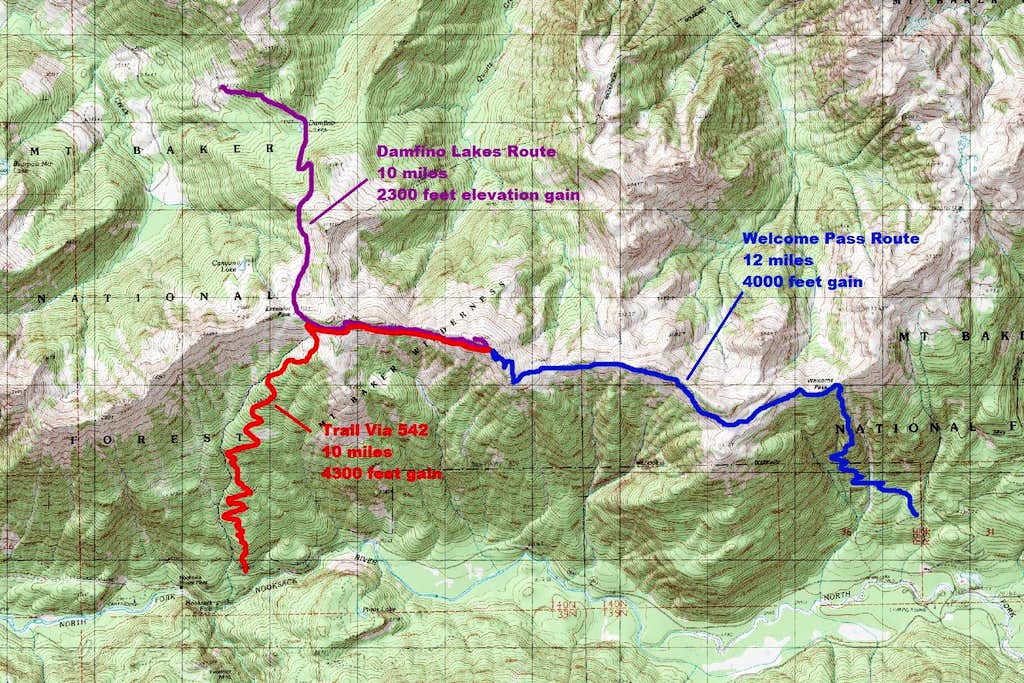 A Route Map
There are three routes to the summit. All of these routes have their advantages and there drawbacks. It should be noted that the best way to get to the summit is by a faint bootpath on eastern side of High Divide Peak. Please don't go up from the west and destroy fragile alpine vegetation. This bootpath can't be seen from trail but within 50 feet you will stumble upon it and will become more defined as you get closer to the summit.

VIA 542: The trail to Excelsior Pass pretty much directly from Route 542 (Mount Baker Highway) is the easiest to access by passenger car. It also melts out the quickest. That being said though this route clearly has the most elevation gain of all the routes.
Welcome Pass Route: Many see this route as the prettiest route to the summit. It is clearly the longest but there are excellent views throughout the top 2/3 of this route. The drawback is the length of the hike (12 miles to High Divide and 14 to Excelsior) and relatively rough road.
Damfino Lakes Route: This route has the least elevation gain to the summit. This route also passes right by Excelsior peak which a good resting point on the way to High Divide Peak. The drawbacks is that this road has been closed from time to time (though as of 2015 it is open). The second half of the road is very rough and high clearance vehicles are strongly advised.

All trailheads require a Northwest Forest Pass which can be purchased at a ranger station or any REI stores. 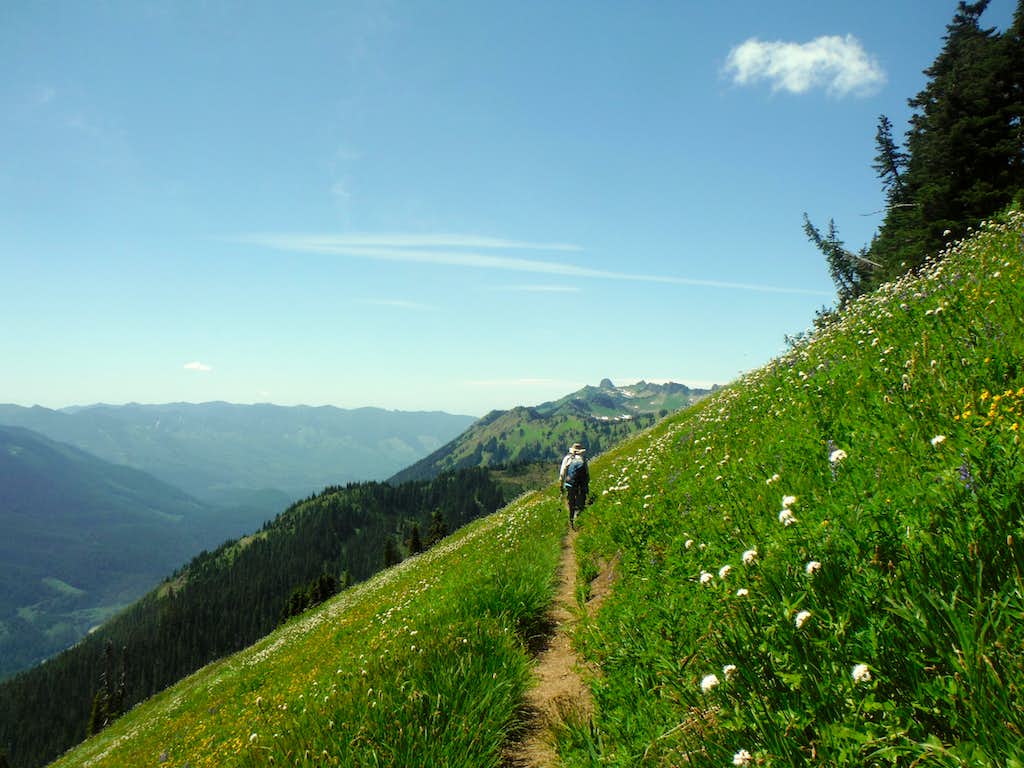 Heading on the High Divide Trail
This mountain can be done year round however it should be saved for summer and fall when the trail is clear of snow. The trails leading to High Divide Peak are usually clear of snow between mid-July to mid October though exceptions in both cases have happened. In July in when the flowers tend to come out and the lupine dominate the trail leading to the bootpath. In fall these fields turn into a special yellow color and become very pretty. A lot of seasoned hikers prefer to hit the High Divide Trail during this time to enjoy the pretty colors on this trail.

Leave no trace camping is allowed here. I saw a number of areas where there have been camping in the past including the summit of Excelsior Peak a mile west of High Divide Peak.