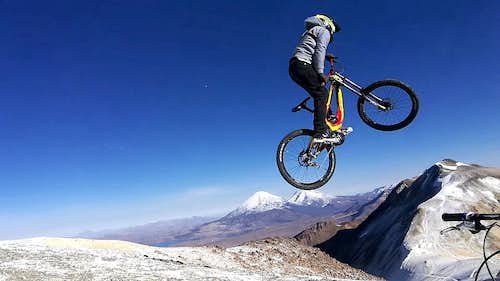 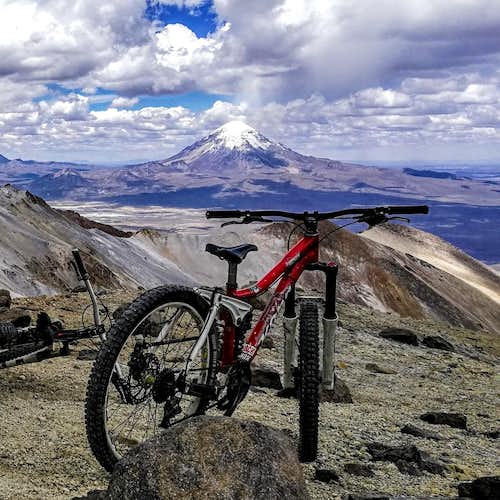 Throughout my career as a  climber and biker, I've had many crazy ideas. The problem with all this is to get loyal friends with whom you can share these ideas and make them come true.

I feel very happy now that I found these friends, 1 month ago I proposed the idea of ​​climbing a 6000m volcano. and get off with mountain bikes.

I thought the idea was ambitious but my friends said "let's do it".

and we started planning the expedition.

John Redmond / a great friend who at the last moment decided to join this expedition.

We leave on Friday, December 7, to the Sajama National Park / 4200m. on the way the group was animated and decided that we would achieve our goal, we drove for 4 hours on the way we were all amazed by the magnificent landscapes and the immense Alti Plano, when we arrived at the town of Sajama and the boys could not wait to ride on their bicycles so we decided to climb quickly to the MONTE Y CIELO viewpoint at 4680m. It is not far from the town of Sajama in a field of loose sand and volcanic rocks at the end. It was intense the guys were very motivated.

the downhill was fun the view of the mountains around was unsuspecting we were sure that the next day would be great.

the objective was clear we got up very early 2a.m. To be exact, we had a basic breakfast, a bit of coffee and bread was enough and we left for the adventure ...

We rode for about 2 hours until we reached the highest point at 6650m on 4x4. the sunrise was beautiful, we felt the energy of the mountain, towards a little wind but that did not matter we were already quite high we started to push the bikes at that height and with cold and wind they did not stop after walking 1 hour we realized quickly that something was not right we started to find penitents / those ice formations that look like thorns of ice, even so we continued the climb every time the height affected our friends more, pushing a bicycle at that height became very difficult the penitents they stopped us, finally we arrived our objective the joy and euphoria of the team was evident, we rested a little because the climate also began to change. We realized that the mountain had put obstacles on us but finally we received agaradecimos mountain, mother earth.

We quickly prepared our team for the descent we knew we would have to stop in some places to pass the penitents.

the descent was indescribable the sensation of speed and adrenaline of 6000m. we reached 4400m. very quickly it was a unique experience.

after having achieved the asana to get off in mountain bikes from 6000m. We thought we deserved to enjoy the park a bit so we decided to go for the geysers and the thermal baths. This activity was very popular by all, especially the shower in the hot springs the power to swim in a very hot and comfortable waters and have it around the giant mountains was great, after such a nice experience we decided that it was time to return home.

and all the team that accompanied us to this adventure

"AN ADVENTURE ENDED, BUT THE PROJECTS AND IDEAS NEVER ENDED WE WILL BE TOGETHER IN A NEW ADVENTURE"