Guam is located 900 miles north of the Equator in the Western Pacific; 13 degrees north latitude and 144 degrees east longitude. From four to eight miles in width and 32 miles long, the island covers approximately 212 square miles, making it the largest island in Micronesia. Mount LamLam is the high-point on the tiny island of Guam, and measured from the bottom of the Marianas Trench to the top of Mount LamLam makes this the largest gain in elevation on Earth, approx 38,300'. During the rainy season, there is a beautiful waterfall to southwest of the summit, kind of obscure unless you just happen upon it on descent. LamLam literally means "lightning," but also refers to several legends and chiefs.

From the summit of Mt LamLam, a 360 degree view of the island is possible; take care not to topple off the tiny lava summit point that only one person can fit on, it is quite windy up there. 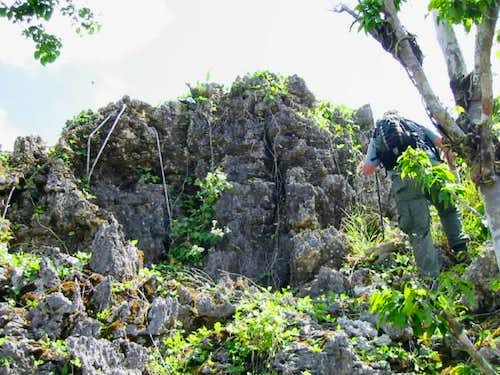 There is one main road ,Highway 1, in Guam that takes you all the way around the island. From the capital city of Agana, drive Hwy 1 along the coast, passing the towns of Asen, Piti, and Agat. Agat makes a good basecamp for exploring the area. Road signs should lead you the rest of the way along the highway and to the trailhead for LamLam. If you can't find the signs stop in and ask a local, they are very friendly, and will be happy to help you fine the trailhead.

Parking in dirt lot near a ranch home, take the obvious trail straight ahead that runs nearly parallel with the highway. You will make an easy continuous ascent on a well-defined trail, passing religious ceremonial alters tucked into the woods on your left and a ridgeline of crosses erected every Good Friday; this is actually the summit of Mt Jumullong Manglo (1263'). This point of interest is not on the direct path to LamLam's summit but really shouldn't be missed.

Following trail to the west, you will drop down into the jungle and gingerly step through thick foilage growing over lava rock. Any misplaced step could land you hip-deep between jagged stones. Passing many limestone formations and WWII relics, you will skirt the base of the summit on the eastern slope. A little Class 3 action over limestone gets you to a terribly windy summit.

The descent is anyway you can get down the western slope through head-high cane grass and occasional limestone formations. Hwy 1 can be seen from the descent slope, so you can keep your bearing on direction. During rainy season, you will pass beautiful waterfalls. 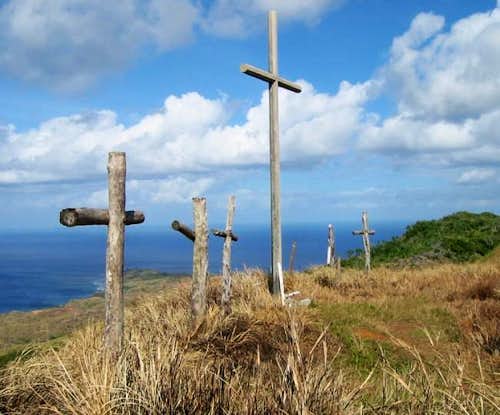 Late December through April is the drier season, but still very wet. The temperature varies little throughout the year. Typhoons occur between June and December and can be dangerous. Although the weather is more stable, the disadvantage of climbing in the dry season is that the waterfalls are dry.

The government of Guam's Department of Parks and Recreation offers public boonie stomps every Saturday to destinations all around the island. Check out the Boonie Stomps Guam, USA web page for more information and some greal pictures.

I had the pleasure of being guided by Dave Lotz, he has lived in Guam for over 35 years. His professional career was in park administration with the Guam Department of Parks and Recreation. He has written hiking guidebooks and World War II historical info books on Guam and the Mariana Islands. He has extensive knowledge on the rich cultural and environmental heritage of the islands. Please drop him a line if you need assistance in getting around the island.

CULTURE
Chamorros today live in 19 villages throughout the island, where they practice many traditional customs while living a contemporary lifestyle. They are very hospitable to tourists, often inviting them into their villages to share their culture and history.
Island fiestas, an integral part of Guam's cultural heritage, are held by Guam families to honor the patron saints of each of the island's 19 villages. Introduced by the Spanish in 1668, each event typically begins with a mass at the village Roman Catholic Church on Saturday evening, followed by a religious procession honoring the patron saint and a buffet dinner in the church hall. The fiesta continues on Sunday, when friends and relatives celebrate with parties at the homes of village residents.

HISTORY
The first inhabitants of Guam, the Chamorro people, are thought to have traveled to the Mariana Islands from Southeast Asia by canoe. They developed a clan and caste system as part of a matrilineal society and they lived isolated from the rest of the world.
Ferdinand Magellan was the first westerner to set foot on Guam in 1521. Nearly 50 years later Spain claimed the Marianas and controlled them for more than 300 years. Jesuit missionaries brought Catholicism and a western way of life to the island. Because of its location between the Philippines and Mexico, Guam became an important link in the Spanish empire and its culture, with the church as the center of village life.
A new era began in 1898, when the island became a U.S. territory after the Spanish-American War.
Japanese forces invaded in 1941 and assumed control of the island until July 1944, when U.S. troops reclaimed it.

ATTRACTIONS
Guam has a variety of attractions both manmade and natural beauty. Ocean vistas and sightseeing vantage points can be found throughout the island. In southern Guam, the beauty is the lush jungle as well as waterfalls and rolling hills. While in the North, limestone dominates the ground. Natural stalagmites can be found as well as hidden fresh water pools and salt-water pools