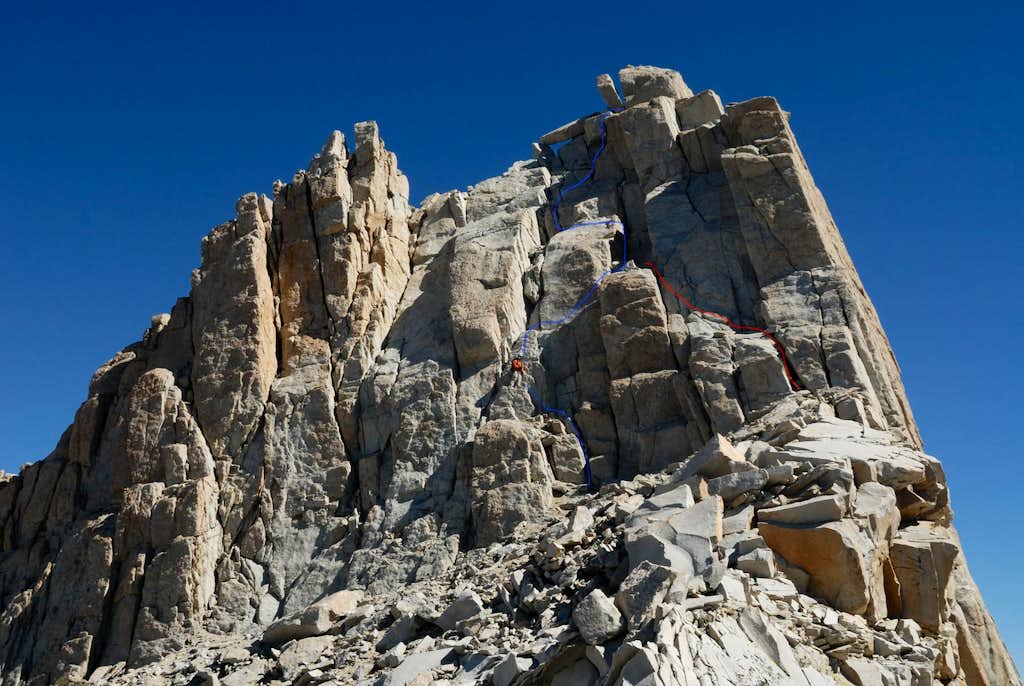 Here are the two 3rd class routes I climbed on Mt. Muir in September 2007. The red was my ascent path and was slightly exciting at the large flakes before the big 'chimney' where the blue and red paths connect. The flakes are loose and fairly vertical requiring some commitment. After that, the blue path leads across the slab traverse with bomber hands on a flake and up the least exposed (often enclosed, actually) route to the summit, with another chimney-like haul to the top of the summit block. Other than some narrow sections with minor exposure the rock was easier and more secure on my (marked in blue) descent path. Photo taken by mattyj.
« PREV NEXT »

Thanks for sharing this high res picture. This picture gives us a very clear picture of what we hope to do on our Whitney trip in August.

I recently climbed Muir and followed the red path up and down. I looked at the blue path and figured it would work also. Thanks for the picture.

I studied this photo for awhile last week before heading out to hike up Whitney. I climbed the red path up to the blue path. Yes one of the flakes down low is loose but its easily avoided.

My dad and I are headed to Whitney in a few weeks and I have been considering a side trip to Muir. This pic is extremely helpful. I am more concerned about the descent. Might haul a rope along for a rappel.

Thank you for sharing!