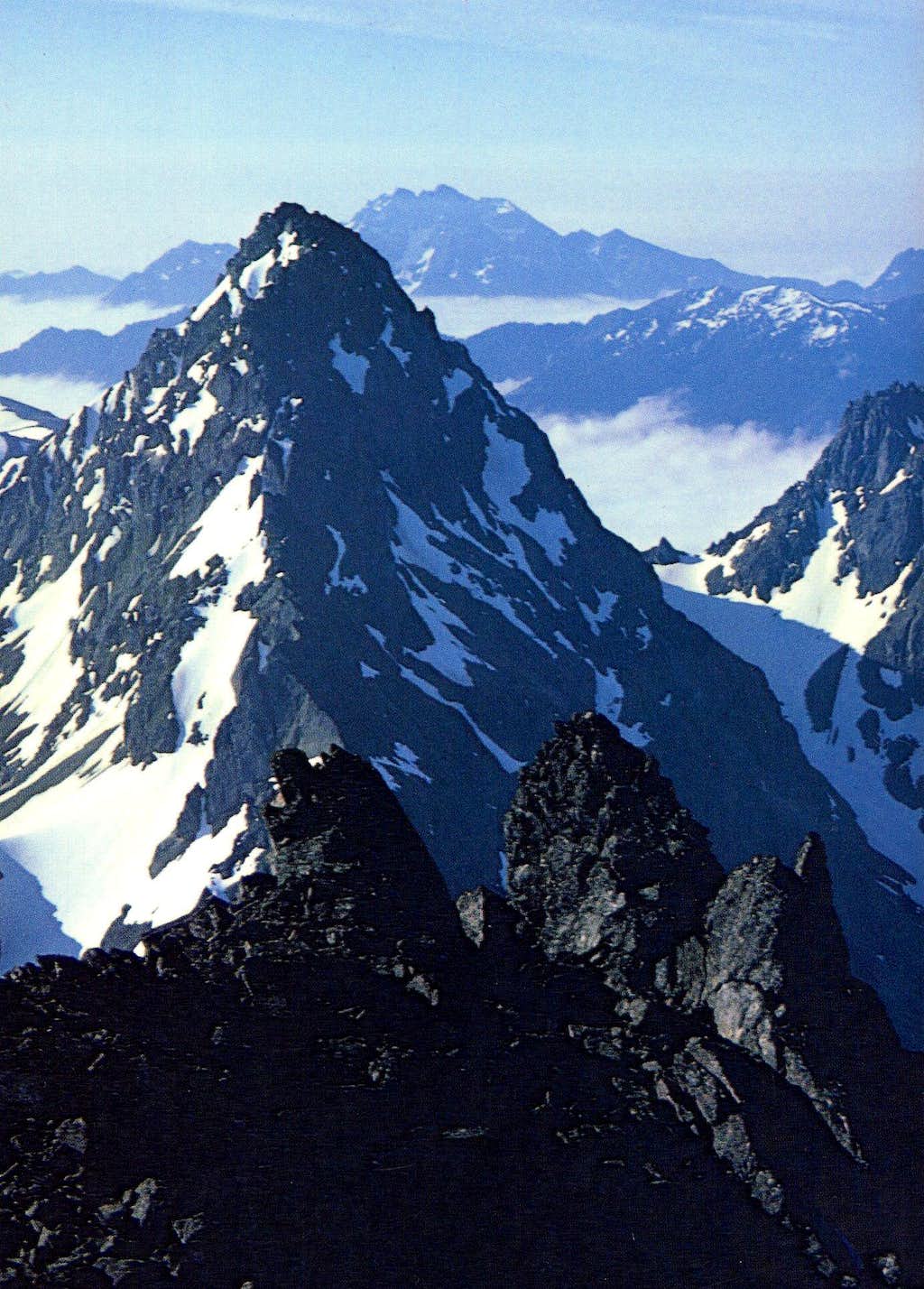 Credited to the W.J. McCleary photo from the book, Climber's Guide to the Olympic Mountains (1979). Photo was taken from 7,788' (2374 m) Mount Deception, the highest peak in the eastern Olympics of Washington's Olympic Peninsula; even though it can't be seen from Seattle. The Olympics stand alone, isolated from other mountains, and RISE from bases just barely above sea level to heights of nearly 8,000 feet. These mountains are not a "range" in the usual sense; rather, they comprise a a compact cluster of steep peaks surrounded by a belt of densely-timbered 'old growth' foothills. Since most of the more rewarding climbs, (including this one), require a minimum of two to three days, it's always advisable to prepare for summer storms. Temperature variations can be as much as 70-degrees in a 24-hour period in the high interior, and it's NOT uncommon to experience clear skies and debilitating heat followed by clouds, rain and driving sleet. (Accidental hypothermia, the loss of body heat faster than it can be replenished, can occur either in conjunction with traumatic shock or from a combination of fatigue and weather conditions. While not previously considered a first aid problem, hypothermia has been the cause of numerous deaths in the Olympics and Cascades.) From the basaltic top of Mount Deception, this is looking SSW toward the bulky pyramid of Mount Mystery (7,631' - 2326 m). Little Mystery is also seen to the right of Mystery, with Gunsight Pass between the two. The peak rising in the center (background) is the The Brothers, located on the Duckabush-Hamma Hamma River divide. I'm not sure what time-of-year this photo was taken, but keep in mind that a result of the area's 'rainfall' is an extensive network of permanent snowfields and glaciers above 5,000 feet. There's at least 70 of these, even though the highest summit in the area is less than 8,000 ft in elevation. It's an awesome area of snow, rock, rivers, lakes and basins!!
« PREV NEXT »

Thanks, what a view!! The Brothers look so
close! A person could easily spend an entire
lifetime on the Olympic Peninsula, exploring
the hundreds of peaks, basins, lakes and rivers.

This photo comes courtesy of Olympic Mountain
Rescue and The Mountaineers.

of my favorite pics from the Climber's Guide! Are you missing the NW, Larry?
Cheers.

Re: This is one

I'm missing it more than words can say. My
grandmother was born there, as well as BOTH my
parents.

I'm still trying to CLONE myself! :)

from your description it looks like the limiting height for perennial glaciers is quitely lower then here on the Alps.
The names of these peaks give a somehow perturbing feeling.

Greetings from Arizona, Marco! Yes, the names
are somewhat perturbing. Because many of the
highest and most challenging peaks in the
Washington 'Olympics' remained virgin for so
long, many of them received interesting names.

Very unique names for such a beautiful area!
For example, The Bandersnatch is a
150-ft. high spire east of the north ridge
of Mount Stone, otherwise known as
Jabberwocky Ridge.

That's my story, and I'm stickin' to it.