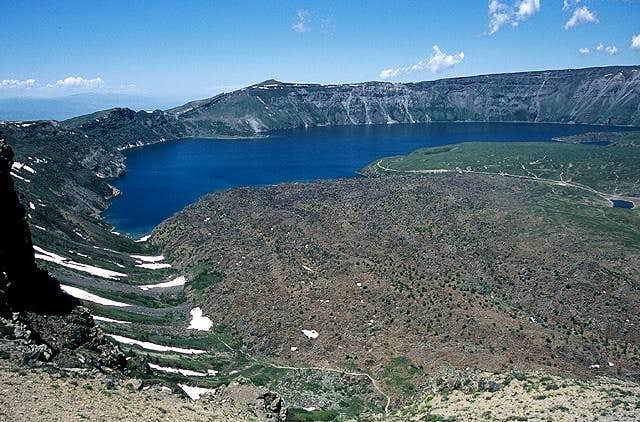 There are two different mountains in Turkey, which are called „Nemrut”. One of they is situated in Adiyaman Province and became famous due to colossal stone heads and other ancient figures from the period of King Antiochos I.
Our Nemrut Dagi (“dagi” means “mount” in Turkish language) is a dormant volcano (stratovolcano), situated in Eastern Anatolia, in Biltis Province. Its last eruption was in year 1692. Much earlier, about 60.000 years ago, during a big eruption lava of Nemrut has bared a river and the big Lake Van has been formed.
Nemrut has a great caldera, which is 8 kilometers in diameter and about 40 kilometers in circumference. The crater rims are up to 700 m higher than the caldera surface. The highest point is in the northern rim – 3050 m. In other sources we can find, that the highest point of Nemrut has 2935 meters only. A southern peak is 2828 m high.
In caldera lies a big cold lake, and two smaller lakes, with hot water, up to 60 degrees Celsius. The big cold lake is situated on the height of 2247 meters, 600-700 meters lower as the crater rims. The depth of them is up to 170 m.

Nemrut Dagi is situated about 15 km of the town Tatvan. You can go the mountain on foot or take a dolmus (small local bus) or taxi to one of the villages: Yumurtatepe or Sentepe. Later are paths to the crater rims easily to find.
Besides, you can reach the inside of crater from the east side on a hardened road, by jeep or van - from Tatvan, via Yumrtatepe. But a walk-up to the crater rim ensures great views.
Walk-up from Tatvan to the southern flank of mountain takes 4-5 hours.

No permits or fees are required. In Eastern Turkey you can meet often military sentinels and road inspections, but the soldiers and police officers are very friendly to the foreigners.

June to September is the best season. In June is the mountain almost free of snow, and the weather is not so hot as in high summer.

Camping is allowed everywhere. There is a simple camping site in Tatvan, too.