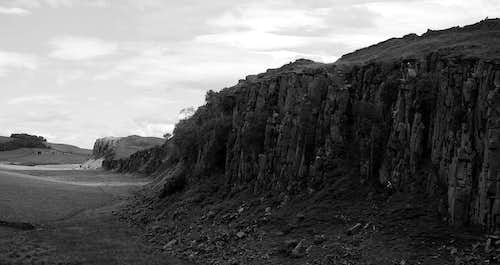 Peel Crag and Crag Lough
Northumberland, situated in the North East of England, is often overlooked in comparison to its close neighbours the to the west and Scotland to the north.
It however offers magnificent scenery, with open stretches of unspoilt moorland and upland pasture. There is also a long dramatic coastline which is arguably the finest in England.

The rewards of Northumberland were not missed on the celebrated English mountaineer Geoffrey Winthrop Young who described the region in the foreword of the first Northumberland Climbing Guide (1950):

‘There is no nobler county than that of Northumberland, as it rolls processionally northward to the [Scottish] Border in great waves of coloured and historic moorland, cresting upon the skyline into sudden and surprising crags, which crown for us the magnificent walking and admirable rock climbs’. 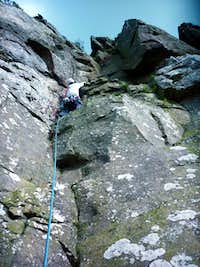 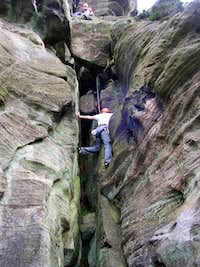 For those seeking solitude the main crags and walking areas generally lie about an hour’s drive from Newcastle upon Tyne. One will see few, if any other people: a stark contrast to the generally overcrowded Lake District.

Near to the crags and mainhiking areas are the towns and villages of Alnwick, Rothbury,Bamborough, Belford and Alwinton where there is ample B&B accomodation as well as camp sites. 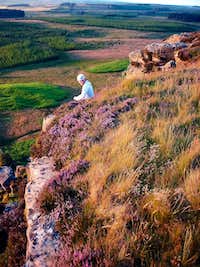 Spring time restrictions can to access to the crags and moors in the lambing season and birds of prey nesting on the crags during the Spring months (in particular Peregrine falcons on Crag Lough). Please be aware of these and if you suspect that there are birds nesting with eggs or fledgelings on a route .. please do not climb that route, go and find another. 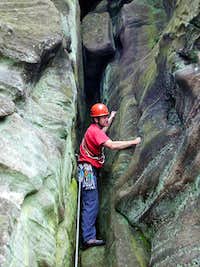 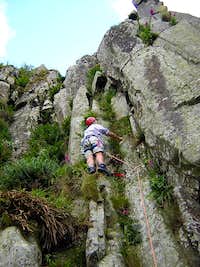 Dolerite climbing at Crag Lough
The earliest rocks of Northumberland originated from a vast sea ringed by mountains in the Devonian period four hundred million years ago. Erosion of iron oxide, (haemtotite) from these mountains produced sediment which compacted in this sea to form into Old Red Sandstone. This sandstone is still to be found in the North West of the region. Later volcanic activity intruded into these sedimentary rocks and the andesite lavas produced igneous rock and the hard granite of the Cheviot range.
About 300 million years ago, further sedimentation laid down the cementstones, a group of limestones, sandstones stones and shales of the Carboniferous period. These form a girdle around the northern, eastern and southern regions of the Cheviots. Overlying the cementstones is a thick succession of Fell Sandstone laid down originally from the vast delta of a river. The subsequent strata tilt led to the inward facing escarpments and outward folding flanks we see today such at Simonside Crag. Further volcanic activity pushed molten basalt through the fault lines and fractures to produce dolerite or hard whin sill. This is evident on Hadrian’s Wall and especially Peel Crag and Crag Lough.
The Ice Age then finally fashioned the Northumberland we see today where the mountains were ground down to the round tops we see in the Cheviot and the valleys gouged along the fault lines. 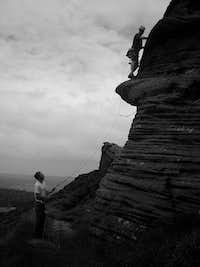 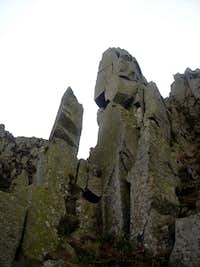 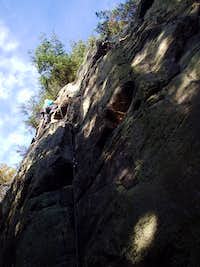 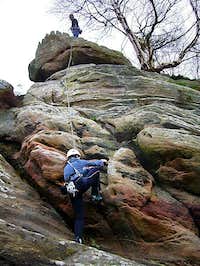 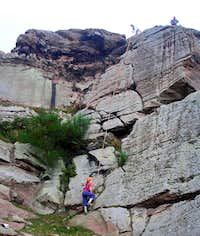 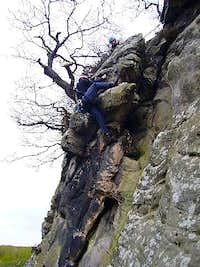 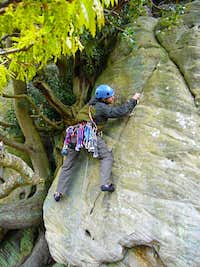 Crag Lough
Location NY 932822
Aspect: North Facing
Rock: Dolerite
Routes: All Grades to E4. Exposed.
104 routes
Walk in: 15 min
Comment: Fantastic evenings climbing venue. Not as popular as some of the sandstone outcrops so some routes have become overgrown 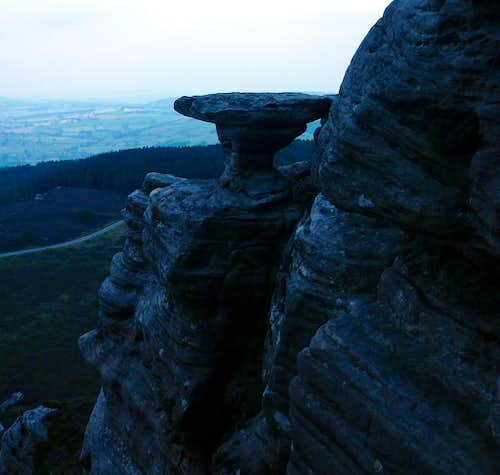 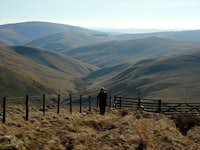 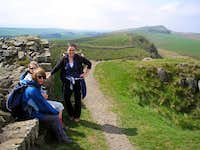 There are a number of hiking areas within Northumberland including four long distance trails that pass through the Northumberland National Park. The uplands are of heather moorland and windswept grass and offer fantastic solitude in one of the remotest areas of England. The region is steeped in history dating from Iron
Age settlements,the Romans and early Christianity, through the troubled times between England and Scotland to the Border Reivers and then to the Industrial Revolution. The main upland hiking area is in the granite massif of the Cheviot Hills which has five mountains over 2000 feet (610m). There are also numerous opportunities to walk through the crags and Dales of the region especially in the Hexham/Hadrian’s Wall area in the south of the county.
In addition, in the east of the region, there are splendid coastal routes which are generally very quiet with wonderful white sand dunes, numerous ruined castles and the famous Abbey on Holy Island. The best scenery and history is to be found between Holy Island and the village of Alnmouth to the south.

Dunstonborough Castle on the Northumberland coast 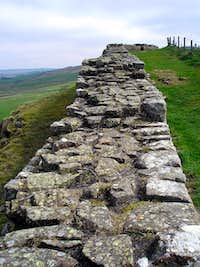 The Hadrians Wall Path is a long distance route of 84 miles between Bowness on Solway and Segedunum on Tyneside and traces the historic wall built in the second Century marking the northern border of the Roman Empire. The highlight of the walk is as it goes through the Northumberland National Park passing along the wall and over the Whin Sill crags of Crag Lough and Peel Crag and the roman fort of Housesteads.
A special bus service - the Hadrian’s Wall Bus - operates daily along most of the length of the Wall throughout summer, and on Sundays and bank holidays in winter, stopping at all the key locations (including Newcastle Central Station, Vindolanda, Birdoswald, Chesters, Once Brewed and Housesteads). Some other local buses also serve sections of the Wall.

Saint Cuthbert’s Way is a pilgrimage path linking places where St Cuthbert started and finished his ministry in the 7th century St Cuthbert's Way is a 62-mile (100 km) walk through attractive and highly varied countryside between the Scottish Borders town of Melrose and Lindisfarne (Holy Island) off the coast of Northumberland. It covers a variety of terrain including the Eildon Hills, the river Tweed, the Roman Dere Street, the foothills of the Cheviots and Northumberland National Park. The route is steeped in history with a number of abbeys, a Roman signalling station and a Roman road, not to mention the border region itself, a violent battle ground in the Middle Ages. The route culminates in the passage to the Abbey on Holy Island via the causeway at low tide.

The Reivers Way is a long distance walk the length of which one encounters few people, little traffic, and has no waymarking. The ability to use a map and compass is therefore essential.
The route runs for 145 miles (232 kms) through some of Northumberland’s finest landscapes. It takes in a wide variety of scenery; heather moorland, wooded river valleys, a fine stretch of Hadrian’s Wall; the Cheviot Hills and, finally, the Northumberland Coast. In essence this route will take you through the best parts of the Northumberland National Park as well as the wonderful Northumberland coastal paths all with fantastic views, solitude and steeped in history.

There are a number of in the area catering for all:

Newcastle Climbing Wall
Situated in Byker in a renovated church NCW has a very friendly reputation with excellent facilities. The wall has bouldering and routes of all grades with in situ top ropes, lead climbing and auto belays.

Sunderland Climbing wall
The place to go for long routes and hard bouldering. A great wall which concentrates on climbing!

Berghaus Wall
Situated in the Eldon Square complex in the heart of Newcastle the wall has good bouldering with great features.

University Wall
The wall is part of the University of Northumbria sports complex in the centre of Newcastle. Relatively small it nevertheless has some good routes for top roping and lead climbing. Best to check if there is someone around to sign you off for your first visit. Also check the open times.

Geological timescales...!!! Many thanks for pointing it out. I will amend the error.