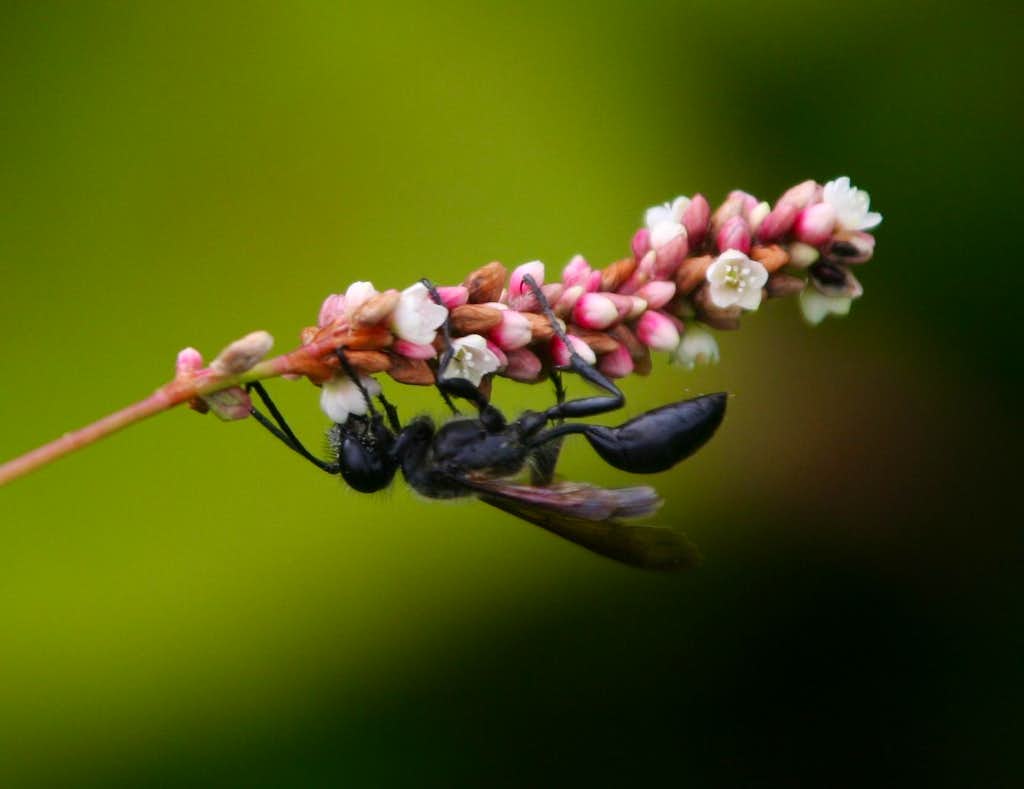 I'm not even a WASP... A Great Black Wasp (Sphex pensylvanicus) on knotweed in the Boston area. I uploaded this photo to use as my User Profile image for a while. It's not mountain-related but it was popular enough that I haven't deleted it even though I have a new profile image. The Sphex genus is part of the family of "digger wasps", best known for burying paralyzed insects on which they lay their eggs - the larvae eat the insects. As you can see, the adults' diet includes nectar or pollen. Knotweeds (also known as lady's-thumb, smartweed, and redshank) are edible, in fact one species of knotweed was among the first plants to be domesticated north of the Rio Grande. (This is probably not that species, but one of several that was introduced from Europe.) the stems can be boiled and eaten (though they're said to be somewhat bitter, like rhubarb) and the roots can be boiled or roasted; "very young tender" leaves can be eaten too.

This image is licensed under a Creative Commons Attribution-Noncommercial-Share Alike 3.0 License.
« PREV NEXT »

The flower is of the genus Polygonum of the knotweed family - Polygonaceae. Can't really get you the exact species without more info.

Thanks! Of the species I can find photos of online, I'm leaning toward P. Persicaria. (P. Cespitosum is a possibility but it's supposed to have visible cilia).
Took this shot a while ago, and this particular plant has been mowed down, but there are many more in my neighborhood - grows in disturbed areas and even sidewalk cracks. What info do you need?

Basically the rest of the plant would be needed. Its not an easy group to separate species from and even a photo of the entire plant may not be sufficient (tiny characters sometimes).