After driving north from San Diego on the I-15 and exiting onto HW 395, Lone Pine’s Dow Villa Motel was my next stop. Over the past 34 years, the landscape has changed along the 395. The Inyo Visitor Center is relatively new, Owens Lake bed shows more water (wish I could have seen it before it went dry), and newer lodging has cropped up here and there. Yet the familiarity of this roadway to another Sierra backcountry adventure resonates with a timeless quality, one that greets me like an old friend.

Of the Eastern Sierra passes, Kearsarge Pass is a frequent choice. At 11,700 feet in elevation, cresting Kearsarge is less arduous than most. But these excursions are less about difficulty and more about the destination; this year’s destination was a return trip to Lake Reflection.

Lake Reflection is close to the middle longitude of Kings Canyon NP. At 10,000 feet, it is also the lowest in elevation for campsites I like to target. I’ll more typically aim for campsites between 10,500 and 11,200, but Lake Reflection is an exception in more ways than one. It is almost two lakes but for a shallow, driftwood-cluttered isthmus. The more northerly portion remains shallow right up to its stream outlet before cascading into Bubbs Creek below; the southern half is deep and surrounded by immense 13,000-foot peaks of solid granite, Mt. Jordan and the Ericsson Crags being among my favorites.

At approximately 16.5 miles, getting to Lake Reflection via Kearsarge Pass can be a two-day effort. This year, I was attempting to make the lake in one day. The need for haste was mandated by the objective to make camp prior to an anticipated snowstorm. According to Mammoth Mountain’s self-proclaimed weather dweeb, Howard Sheckter, the October 5th forecast was calling for 3 to 5 inches of fresh snow scheduled to arrive Wednesday morning, October 9. It was a storm that had been on his radar for over two weeks and it was likely to be my last chance to experience the beauty of another 2013 fall snowstorm in Sequoia/Kings Canyon (SEKI). Early October snowstorms are generally brief and followed by sunshine. They also create what can be some of the most incredibly beautiful light. Another advantage of these early winter snowstorms, unlike their summer counterparts, is the danger of lightening decreases considerably. All the same, I was torn with apprehension about the decision to make this trip; it was not until Monday morning of October 7, I finally decided to give it a go.

Following a restful night at the Dow Villa, breakfast was next in order at the Mt. Whitney Restaurant. I read a Steven Koontz novel found the previous evening on a Dow Villa bookshelf while savoring the flavor of maple syrup on French toast. Solo backcountry adventures best begin with a full belly and a mindless read!

Following breakfast was a short drive up the 395 to Independence and a left-hand turn towards the Onion Valley trailhead. As with all SEKI trailhead approaches, I sense growing warmth the closer I get—it is similar to visiting a childhood home, a place full of memories past. Only in this case, I get to become that child again! I become charged with boundless energy rooted in a never-ending enthusiasm for the Sierra. The day this resourceful energy is absent upon arrival is a day I’d just as soon never know.

This year, the spacious Onion Valley overnight parking area contained only four vehicles! The sparse showing was a product of a federal government shutdown. Political gamesmanship begets government dysfunction! With trailhead restrooms locked and signage to the effect of a national park closure detailing fines and jail time for violators, I assumed all the rhetoric was nothing more than an exercise in liability protection.

From the Onion Valley Trailhead at 9,600 feet, Kearsarge Pass is made in less than 5 miles with 1,100 feet in gained elevation. Blue skies, light winds and cool temperatures prevailed. The cooler weather reduces water loss, and reduced water loss means faster trekking. With 2 liters of water and 51 pounds of gear, I was off at last!

After making the pass, it is a long downhill hike of 8 miles and 3,700 feet to Junction Meadow alongside Bubbs Creek. It is also a stretch garnering a good share of those “WOW” moments with breathtaking views and impressive waterfalls. I made Junction Meadow at 1:30 p.m. gaining confidence I’d cover the next five miles to Lake Reflection well before dark. The last two miles of un-maintained trail would considerably slow what had been better than a 2-mph pace. It was 4:15 when after nearly 8 hours, I made the northern shores of Lake Reflection. I setup camp, made dinner, and while dinner cooked, I squeezed a quick dip into the frigid lake waters. The skies were blue when I hit the sack. Pleasantly exhausted, I slipped into a fitful sleep.

Clouds began gathering shortly after exiting the tent at 7:30 the following morning. Still in the shadow of a mountain, temperatures remained somewhere below freezing. A handful of trail mix, two cups of hot coffee, a Power Bar in pocket, and I was off to see what this beautiful lake would reveal under the gathering light of October’s first snowstorm. Photography is the objective, and such efforts are doomed to failure without exciting light. Stormy weather in the Sierra can make for the most mind-boggling lightshows and it is why I overcame my earlier trepidations to make this trip in the first place. It was an exciting moment when the first flurries arrived. With the tripod standing in the lake’s northern reaches and with the camera facing to the south, I worked the scene for as long as the storm would allow. By 9:50 the mountains were no longer visible and it was time to make a return to camp. With the luxury of another hot coffee in hand, I enjoyed watching the windless storm develop. It was a peaceful transition as the lake became shrouded in whiteout. With the cold temperatures growing beyond comfort, it was only 1:30 when I retired to the protection of my tent. It was a hard, icy kind of snow and reminded me of sea salt in appearance. It made a loud pitter-patter as in rained down. By nightfall, the snowfall remained relentless. Several forays outside to clear the tent’s perimeter had me fearing I’d gotten myself into more than I had bargained! It’s not like there was any bargain really, but all the same, I could not deny a returning sense of trepidation—“What was I thinking chasing a snowstorm when I could instead be surrounded by the creature comforts of my home in a rainstorm instead? #*#*!”—Then I fell asleep. 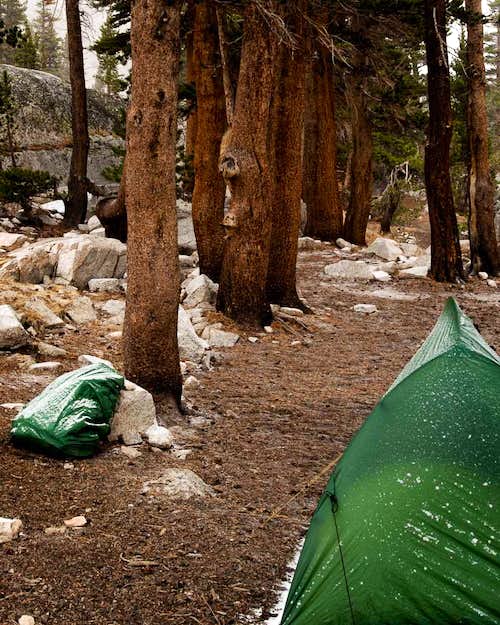 It had fortunately ceased snowing around 9:30 the previous night. Sleep was restless, but I felt rested all the same. Upon exiting the tent around 9:00, I was greeted with a heavy carpet of snow measuring 8 to 10 inches! First things first, stomp down the snow in the kitchen and make coffee! There was no hurry; I was going nowhere anytime soon. After the usual breakfast of trail mix, a Power Bar and two cups of coffee, I stomped down a trail to the lake and replenished the water supply. By now, the sunshine was providing welcomed warmth and I began taking in the surrounding beauty of a virgin winter-wonderland! I had scheduled a three-night stay, and the time was perfect to rest and relax while surrounded by a landscape transformed. 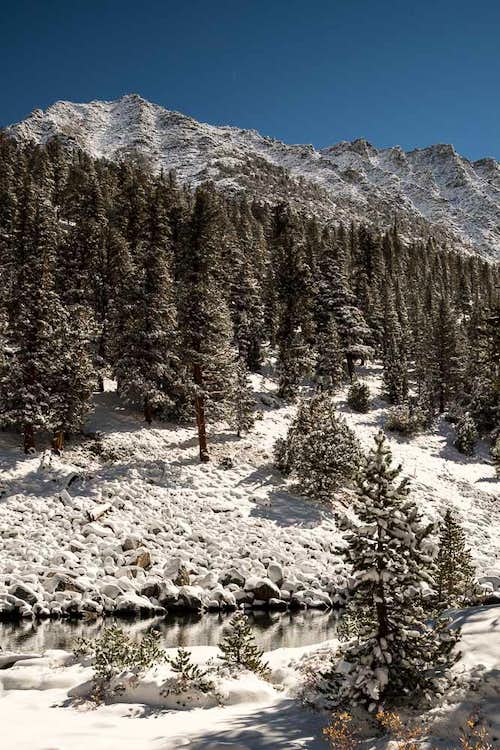 After three nights of having a beautiful lake all to myself, I planned an early afternoon departure of what was an anticipated two-day exit. With snow-hidden trails, the going would demand a slower, more cautious pace. My first challenge was to make it across two sections of moraine with dangerously slippery footing or no footing at all. Crossing piles of snow-covered boulders demands occasional stretches of crawling on all fours, and getting on all fours under the weight of a backpack atop snow-covered boulders is not undertaken without a certain sense of dread.

After 6 hours of hiking through wet and melting conditions, I had been under pressure for better than an hour to find a suitable campsite. It is challenging enough to setup a camp in the snow, but doing so after sunset only makes the challenge all the greater. While hiking along the shores of Bullfrog Lake, I fought off the temptation to make my vehicle when finally I came upon a level site beckoning my pack off of my back! There was only one problem; Bullfrog Lake has been off limits to camping since 1961! Good thing our federal government had shut down. Without rangers in the park, who would ever know? It was a sweet deal. I had no idea what a beautiful view could be had alongside Bullfrog and immediately understood why it had been closed all of these years. 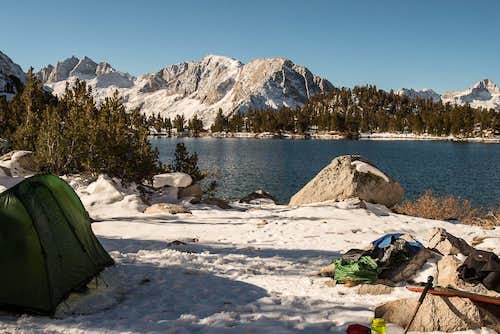 The following day the sun was shining bright. By noontime, most everything was bone dry with the exception of my boots. (Although the residual dampness in those boots was nothing compared to the blocks of ice they resembled at sunrise!) I had less than 3 miles and 1,100 feet before making Kearsarge Pass. The remaining 5 miles to the car went faster and faster as snow levels receded from knee deep to near nothing. I enjoyed chatting with other hikers coming up the mountain. Some were going over the pass and others would turn back. I was soon to find the parking lot below filled with over a dozen vehicles in contrast to the paltry four upon entry. It’s funny how the snow brings people into the mountains. I most definitely prefer letting the snow come to me.

It is always with a sense of relief when returning to a trailhead parking lot. The joys of anticipating the creature comforts of home are made greater by the deprivations endured—one of but many reasons why I return year after year. 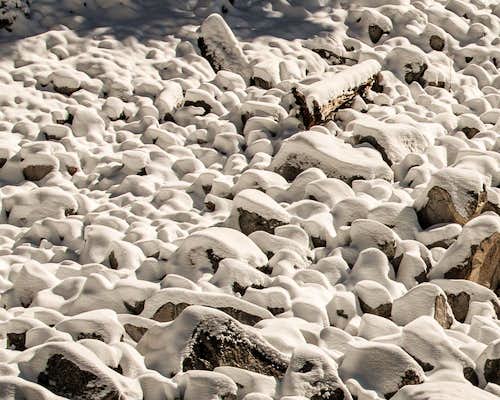