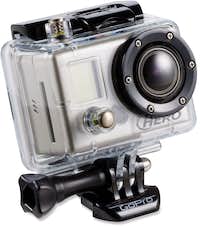 A video camera is a camera used for electronic motion picture acquisition, initially developed by the television industry but now common in other applications as well. The earliest video cameras were those of John Logie Baird, based on the electromechanical Nipkow disk and used by the BBC in experimental broadcasts through the 1930s. All-electronic designs based on the cathode ray tube, such as Vladimir Zworykin's Iconoscope and Philo T. Farnsworth's Image dissector, supplanted the Baird system by the 1940s and remained in wide use until the 1980s, when cameras based on solid-state image sensors such as CCDs (and later CMOS active pixel sensors) eliminated common problems with tube technologies such as image burn-in and made digital video workflow practical.

Video cameras are used primarily in two modes. The first, characteristic of much early broadcasting, is live television, where the camera feeds real time images directly to a screen for immediate observation. A few cameras still serve live television production, but most live connections are for security, military/tactical, and industrial operations where surreptitious or remote viewing is required. In the second mode the images are recorded to a storage device for archiving or further processing; for many years, videotape was the primary format used for this purpose, but optical disc media, hard disk, and flash memory in tapeless camcorders are all increasingly used. Recorded video is used in television and film production, and more often surveillance and monitoring tasks where unattended recording of a situation is required for later analysis.
Using a pocket video camera

Modern video cameras have numerous designs and uses, not all of which resemble the early television cameras.

Professional video cameras, such as those used in television production and sometimes filmmaking in digital cinema; these may be television studio-based or mobile in the case of an electronic field production (EFP). Such cameras generally offer extremely fine-grained manual control for the camera operator, often to the exclusion of automated operation.
Camcorders, which combine a camera and a VCR or other recording device in one unit; these are mobile, and are widely used for television production, home movies, electronic news gathering (ENG) (including citizen journalism), and similar applications. Some digital ones are pocket video cameras.
Closed-circuit television (CCTV) generally use pan tilt zoom cameras (PTZ), for security, surveillance, and/or monitoring purposes. Such cameras are designed to be small, easily hidden, and able to operate unattended; those used in industrial or scientific settings are often meant for use in environments that are normally inaccessible or uncomfortable for humans, and are therefore hardened for such hostile environments (e.g. radiation, high heat, or toxic chemical exposure).
Webcams are video cameras which stream a live video feed to a computer. Larger video cameras (especially camcorders and CCTV cameras) can be similarly used, though they may need an analog-to-digital converter in order to store the output on a computer or digital video recorder or send it to a wider network.
Most 21st century video cameras are digital cameras which convert the signal directly to a digital output; such cameras are often small, even smaller than CCTV security cameras, and are often used as webcams or optimized for still-camera use. The majority are incorporated directly into computer or communications hardware, particularly mobile phones, though analog video equipment remains in use.
Special systems, like those used for scientific research, e.g. on board a satellite or a spaceprobe, or in artificial intelligence and robotics research. Such cameras are often tuned for non-visible radiation for Infrared photography (for night vision and heat sensing) or X-ray (for medical and video astronomy use).