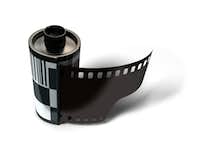 Film is simply plastic coated with a light sensitive emulsion. When the emulsion is properly exposed to light, an image is formed on the film. Chemical processes turn the latent image into a visible image.

Different film speeds correspond to a film's sensitivity to light. Velvia 50 or Kodachrome 25 are slower slide films--they need more light to be exposed properly. Ektar 100 is a medium speed print film. And some print films like Fuji 400H and 800Z are pretty fast--they need less light to be exposed properly. There is a trade-off though, the faster the film is the bigger the grain size is. Slower films have much smaller grain. Most landscape photographers prefer these fine grained films like Velvia 50 and Astia 100. Some people prefer faster film with large grain for portraits or other work.

Film is great for archival purposes. When you get back from a backcountry hiking trip, or from climbing Mt. Whitney, you can develop your film photos and keep the negatives/slides for decades. You can make prints or enlargements, or even scan them into digital files. 50 years from now, you can pull out your old slides and shine some light through them and they are still as beautiful as ever. How can you archive digital photos??

For most people it doesn't matter how you take a picture. It comes down to personal preference. Film and digital have different "looks."

I will be updating this page and adding different films in the near future with example photos. Please check back often.