Prison Hill is one of the premier hiking and trail running areas in Northern Nevada. Due to its location within Carson City, which is Nevada’s capital city, it is frequented on a daily basis by people hiking its slopes. It is so popular, every April a 10k and Half Marathon race is contested on the mountain.

The name “Prison Hill” is no coincidence. Eerily, there are not one, but two prisons next to the mountain; one on the northwest side, and one on the southwest side.

Bordered by the Carson River on the east and the Carson City valley to the west, Prison Hill has a respectable prominence of 999 feet. This allows for spectacular views in all directions, especially for a summit only rising to 5,724’.

The mountain is actually made up of a ridge about 4 miles long, running north-south. In addition to the high point of Prison Hill, the ridge has two other summits rising more than 200’ above their saddle. Each of these can be a destination on its own, particularly the central summit, Point 5,585 – which is adorned with spectacular rock towers. Point 5,585 only has a prominence of about 210’, while the northern summit, Point 5,535 has a prominence of about 250’. 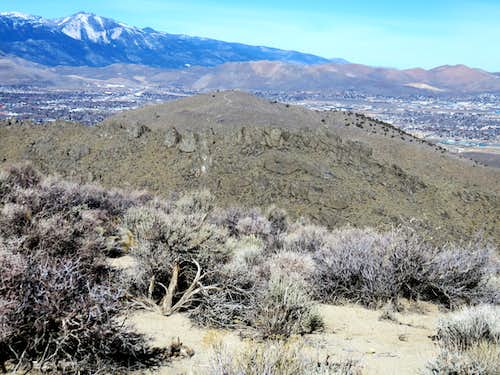 Looking north from Prison Hill over Point 5,585 and Point 5,535
There are also plenty of opportunities to scramble up rocks in multiple locations over the mountain.

Prison Hill is best hiked in fall, winter, and springtime. As with most of the lower summits in this area, summer hiking is not recommended due to heat and rattlesnakes.

From the north, there is a route that is easily accessible from the main highway. Taking 580 south to Fairview, head east and turn right around a traffic circle. Once you hit Carson River Road, the trailhead parking is on the west side on the north end of the mountain at an elevation of about 4,670’.

From the east, the Silver Saddle Ranch is a popular starting point. To get there, continue down Carson River Road for another 1.5 miles. Then take a right and drive ½ mile to a dirt parking area. The elevation at the trailhead is 4,680’.

From the west, there are three starting points: The Water Tank at the end of Koontz Lane, the circle at Duarte Drive, and the intersection of Gentry Lane and Snyder Avenue. All of these can be reached by taking Edmonds Drive which runs along the west side of Prison Hill. Take the Fairview exit off of 580, head east for a third of a mile, and turn right on Edmonds.

For the water tank, take Edmonds 1.3 miles south and take a left on Koontz Lane. The elevation at the trailhead is 4,860’.

For the circle at Duarte Drive, take Edmonds 1.8 miles south and take a left on Clearview Drive, then head to the circle once you hit the mountainside. The elevation at the trailhead is 4,830’.

For the intersection of Gentry and Snyder, take Edmonds 2.8 miles south and take a left on Snyder Avenue. Head to the mountainside and part on dirt on either side of the road. The elevation at the trailhead is 4,750’. 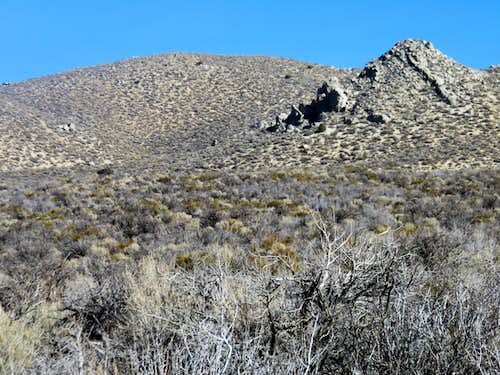 Zoom shot of Prison Hill from the west
From the south head to the intersection between Snyder and Gentry, but continue south on Snyder Avenue for another mile where there is a dirt parking area on the left. The elevation at the trailhead is 4,690’.

The Trail Map identifies the primary routes. Below are some notes for the various routes.

From the north, this is the longest route, but offers a good opportunity to hit all three summits and to really explore a good deal of the mountain. From the parking area take the road generally heading to the right going straight up to the ridge. Regardless of the direction you take, you will hit a circle right before the road heads up the mountain. The road ends at a brushy area, with no trail continuation. But at the circle, a trail heads up the slope. The trail is on the left side of the circle. 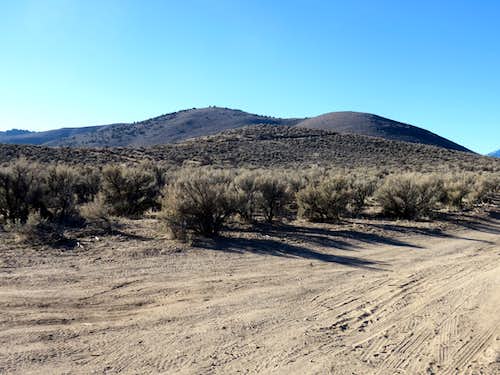 View of north side of Prison Hill Ridge
The trail reaches an open area on the ridge. Go left and it is a nice trail heading along the east side of the ridge. It eventually connects with a road. Take the road up and over a rocky ridge and steeply down to the base of Prison Hill. A road leads up to Prison Hill in ½ mile. The total distance to the summit is about 3 ¼ miles with an elevation gain of 1,500’.

From the east at the Silver Saddle Ranch, take the road heading left (south), which turns up into a canyon heading up the mountain in a little over ½ mile. Head up the road up the canyon, and you will reach the road up to Prison Hill in a similar distance. Head up the road to Prison Hill to the summit. In total the hiking distance is 1 2/3rds mile, gaining 1,050’. You can easily also reach Point 5,585’ by adding ¾ miles and 300’ of elevation gain. 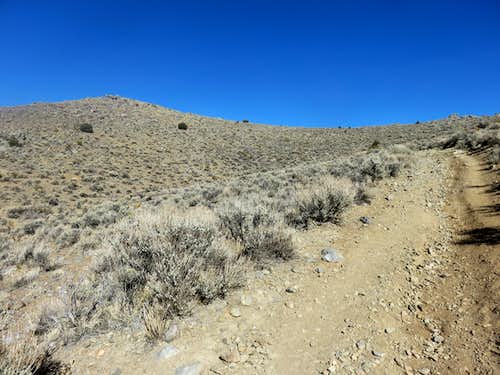 Hiking up the west side
There is trail sign at Duarte. To get to Prison Hill just take the road heading right up in the direction of Prison Hill, and the summit can be reached in 1 ¼ miles gaining about 890’.

If starting at the Snyder/Gentry intersection, Point 5,029 is an appealing rocky point you can scramble up to 1/3rd of a mile from the parking area. To get to Prison Hill from this starting point, just take the first left, and stay on the dirt road, which eventually heads left to Prison Hill. The total round distance to the summit and back is only about 3 miles, gaining just under 1,000’ on the way up. Add only ½ mile total and another 125’ to climb up Point 5,029. 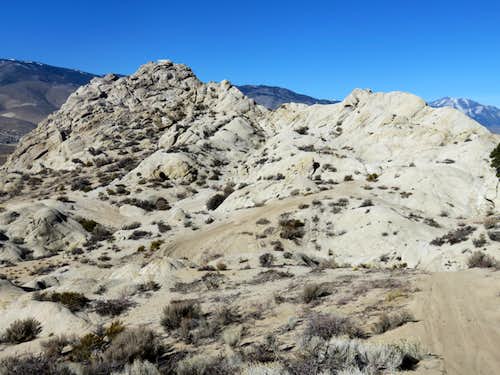 
From the south it is pretty much a straight shot from a sandy wide area up to a road that goes up to the summit in about 1.75 miles, gaining about 1,035’.