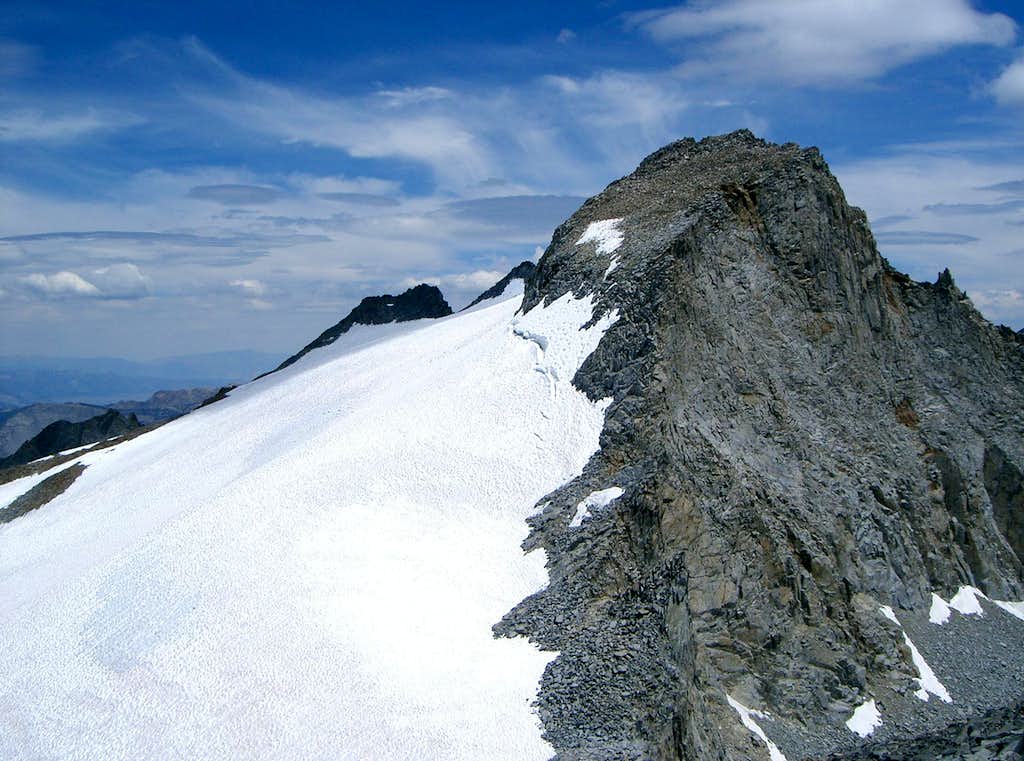 Northwest ridge of Lyell from East ridge of Maclure. My journey continues. Lyell and Maclure. July 14, 2007. 2 pm.
« PREV NEXT »

How did it go ? What did you think of the route up Lyell from the col ?

I'm hoping to head up there within the next few weeks - my foot seems to be back in shape for scrambling.

Thanks, Rob!
I am so glad your foot is better!
Lyell was tough as a dayhike. On July 14, it was my second attempt. We failed two weeks prior to that with Elena, turning around at the berg with me completely exhausted. I returned two weeks later starting earlier (6am) and with less gear (no crampons, light hiking boots, less water). I summitted Lyell about 1 pm. Glacier was tricky without crampons, its higher part already started icing up. I opted for the ridge and was really happy with the route. One could easily keep it to class 3, if staying to the left of the ridge. Of course, there are ample opportunities to make it harder, if one wished. Maclure was easy from the saddle in the beginning, I started wondering where class 3 was. Later I found plenty of class 3 and more. I was not as careful about choosing the easiest route as on Lyell though. Summitted Maclure at 2:30 pm. I wasn't really tired at this point and decided to go check out some lakes I saw from Maclure. This turned out to be a lot more cross country trevel than I expected. My return route was beautiful but long and tiring. When I finally hit PCT it was already 7 pm. I still had 7-8 miles to go and this last section was tough. More mentally tough than physically. It was hard to keep pushing the body at the end of the long day. I was back at the car at 9:30pm after about 30 miles of hiking. Drove back to the Bay Area the same night.
Let me know how your trip goes!
Vlad.