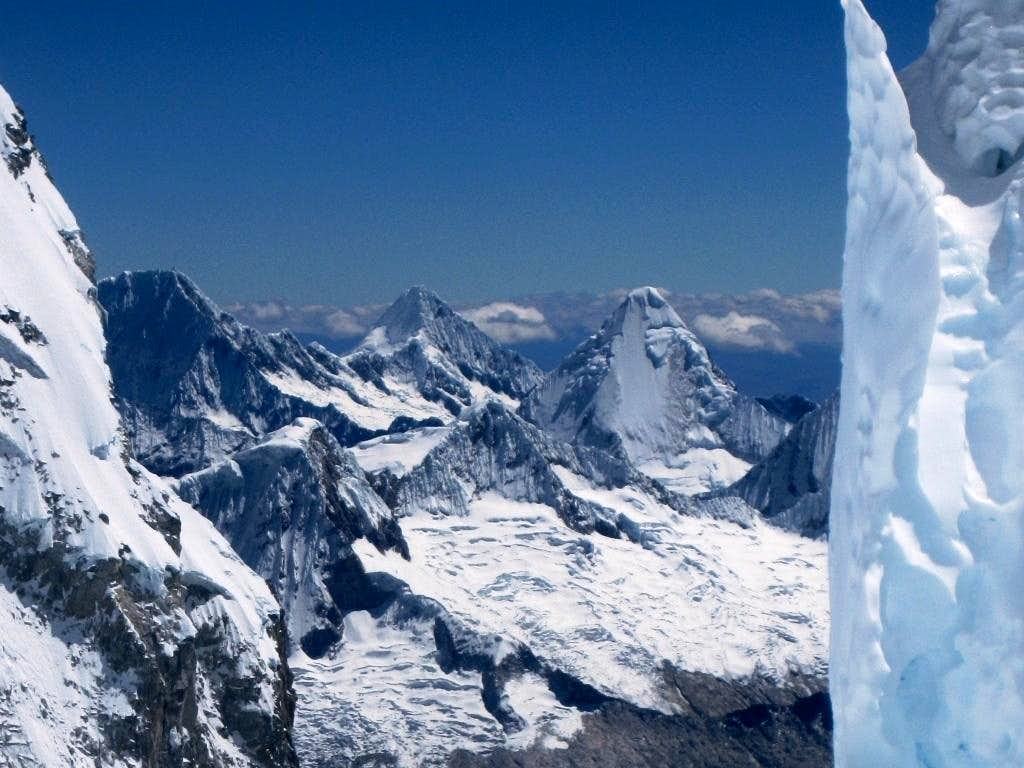 View from high on Huascarán Sur. On the right is an ice formation on the slopes of Sur, on the left is the extremely difficult east ridge of Huascarán Norte. The two lower peaks in the middle are Pisco Oeste (5752m) and Pisco Este. For the latter, I couldn't find a precise elevation. Google Earth gives Este 2m less elevation than Oeste, yet it is suggested that Este is the higher one ("Yuraq Janka: Cordilleras Blanca and Rosko", by John F Ricker). Regardless, Pisco Oeste is the one that is climbed often. Its normal route is a relatively easy climb, rated PD, making it suitable for beginners. It's also a fine acclimatization climb for those aspiring to get higher. And, last but not least, the views from the summit are magnificent! By the way, many sources give Artesonraju an elevation of 6025m. As far as I know, the difference comes from the official Peruvian IGN map versus the AV map of the area. I lean towards trusting the former, based on what I read about it in "The Andes - A Guide For Climbers", by John Biggar. And, let's face it, given the choice, any commercial operator will advertise the higher elevation, because that puts it over the magic 6000m mark. On the other hand, these three summits are quite sharp, which might make it difficult to get an accurate elevation from satellite data. For that reason, I'm not completely ruling out the possibility that a higher elevation will prove to be correct after all some day. 8 August 2011.
« PREV NEXT »

Is there a mutated strain of contagious summit fever on Huascarán? - Four months in Peru, Part XII(Trip Report)