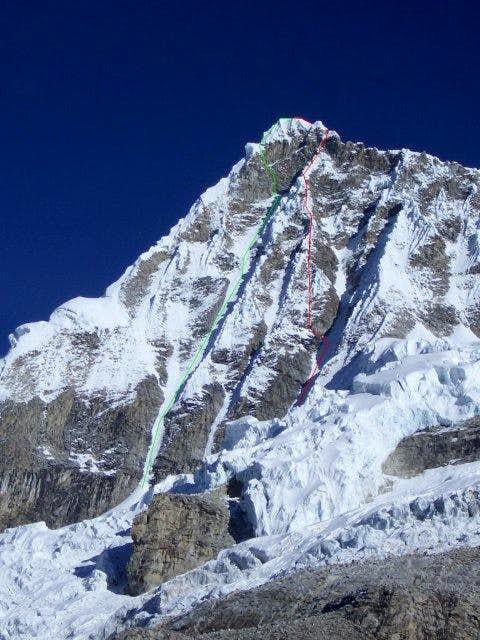 Actually the green line on this photo is the climb we jokingly named 'super dooper couloir: the british route' back in 1997.

We climbed an almost identical line as that shown up the couloir to the head wall. The first ice pitch was about 90+ degrees but while the head wall was treacherously loose we found a route at grade v.diff (i.e. 3c not 6a) and there was no need to aid any of the route. We rapped off from the snow at the top of the head wall without going to the summit - the final summit ridge didn't look hard, but it was late and we didn't have bivvy gear. We gave this route TD+.

Not sure what the 'salida directa' is, they either repeated our route with a variation through the headwall, or climbed something completely different. Perhaps the central couloir - as there are more rocky sections in that, on your photo, and it is more likely to require some aid.

The first recorded ascent of this face was by Fisher, Warfield and Sheldrake using the righthand coulior in 1986 - not by us. It is detailed under the South Face in the Dave Sharman guidebook (1995 edition).