While preparing, we found trek reviews from people who crossed that river, so it is possible, but very challenging, as they wrote. We were in Sarek mid-August. Most of time we had excellent weather. It was getting dark after 11p.m.

The night before arrival to Kvikkjokk, we camped ca. 40km before the town. In the morning it took us a while to pack and get to the village. We drove to Kvikkjokks Turistservice (www) where we bought a map (200SEK, nominal price was 150SEK). The lady allowed us to leave there our car (for free) instead of parking, which is 300m further, at the beginning of entry to Kungsleden (the parking is quite big there - for around 50 cars). 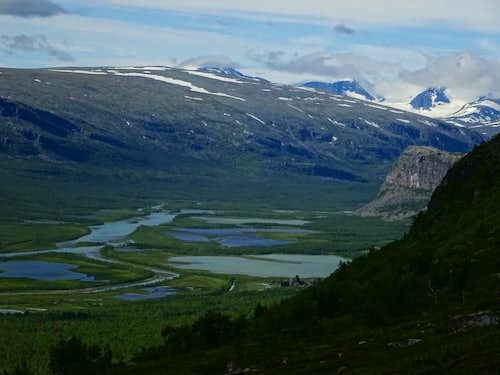 For the first three days we walked Kungsleden. Usually it takes a few (2-3) days to get used to trekking (all day walk, not much food, carrying heavy rucksack etc.), so we walk much slower and get tired easier. The same was this time.

We left Kvikkjokk around 1.30 p.m. After 2h30 we got to a wooden bridge. After next 15min we were at paths junction. We kept right on Kungsleden, the other leads (left one) to mountain Parte. Unfortunately it started to rain. We got to Stuor Dahta Lake 4h50 after we left Kvikkjokk. It was quite late and the weather was very poor, so we decided to camp there. It is easy to find place for camping along the lake - views are very nice, if there are any. There are several places suitable for tent within 30min walk after you get to the lake.

The second day of our trip we started late, mainly due to moist weather. We wanted to dry our tent before further walk. We walked along the lake on Kungsleden and got to hut Partestugan, which is ca. 18km from Kvikkjokk, after 2h20. From this place to the next huts (Aktse) is ca. 24km. After another 1h20 we get to the bridge. It is nice place for camp even for several tents. We stayed for night next to another bridge (over Jakkejagasj) 3h40 after previous one. The views were spectacular.

We started around 11a.m. (the time we were in Sarek it was getting dark much after 11p.m so we could start so late). After 0h45 we got to hut or kind of shed - probably one could stay there if needed, we didn’t check. Later the path starts to go down. We got to small bridge (1h30 after the hut) and to Lajtaure lake within 2h00 from the bridge. We waited around 1h for a boat and row to the other side (another 45min). I would recommend to plan at least 2-3h to cross the lake - see my general comment in remarks below. 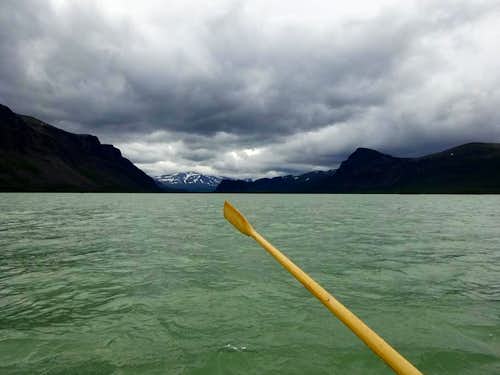 When we got to the lake it took about 15min to get to Aktse. We decided to get fresh water and walk another 15min up and find place to camp. If we knew it takes only another 25min to reach top of hill we would do it. The view is much nicer there. Fresh water is also available there.

That was the first day we felt really fit.

We climbed top of the hill within 15min and turned left from Kungsleden to way to Skierfe.The path is very clearly marked with a sign, so it is not possible to miss it. After another 2h25 we get to bottom of the mountain Skierfe. Way up and down took us 40min in total. The views from summit for Rapadalen are breathtaking. It is definitely worth to make day trip to Skierfe if you walk Kungsleden. 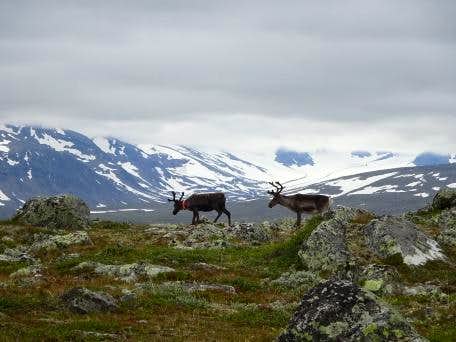 From Skierfe we walked with no clear path marked. Of course there are people walking this way so you may find paths and piles of stones showing the way, but there is no “one and only” way to make it. From Skierfe we walked down Tjasskavarasj valley for about 1h10. We had to find the right way between wet areas of ground. We were rewarded by seeing the first reindeers. From Tjasskavarasj to the next valley (nameless but with river Nammasjjahka) we walked on the South of mountain Gierdogiesjtjahakka. It is not the most pleasant experience due to many rocks. We got to river Nammasjjahka valley after another 1h30. We camped there.

The first thing we had to do after we packed was crossing river Nammasjjahka. We made it above the place where the river starts to flow more vertically and rapidly (some people we saw passed it in area where it flows faster - on our left side, closer to Rapadalen - it short cut your way, but it requires to go much down to the river and up. It doesn’t save much time.). After crossing Nammasjjahka River we went left, so we had mountain Sourkitjahkka on our right hand (you could turn right to pass it on your left hand - you would lose views of valley, but get to Bouvdajagasj River much higher and save some time going up in next valley. We walked that way when returning and definitely recommend it). The valley we reached after 1h30. We went right in order to pass two next rivers as high as possible. We find it less tired and much safer especially one of them is quite rough. It took another 2h15 to get top LulepVassjajagasj River. We passed Lulep Vassjajagasj and turned left directly to the Rapadalen and Rahpaadno River.

It took us 4h15 to get to it. We walk through bushes; go around wet and muddy places a lot. It is quite hard and took us a lot of energy and more time than planned. Finally we got to lovely beach next to the narrowest part of the river. The beach was very nice and getting there was rewarding. There are camping places on each sides of it. 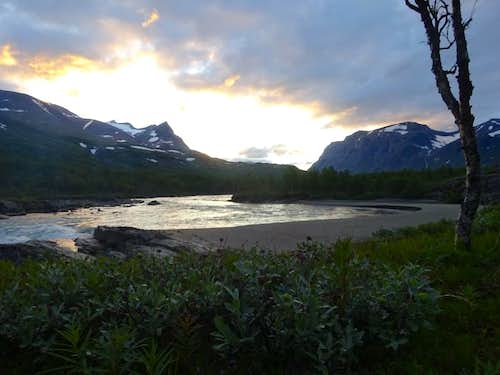 It was obvious that it will not be possible cross the river close to place we camped. The current was much too big. We decided to go up the river with no bags for recon. We went to area where the river is much wider - close to some islands. Unfortunately it occurred that the river bottom was sandy and muddy. We tried in several places, but we were drag into sand each time. We decided to change our plan, comeback to our camping place and go to the East on the path which is lead along the river - we wanted to surround peak Lulep Spadnek and get to Skierfe.Our recon took us more than 4h. Our waders were very useful.

We had lunch on the beach, washed, packed and went East. After 1h30 we want not more than 1.5km. Once again we lost with bushes, rivers and lack of decent path. We changed our planes again and walked straight up to Alep Spednek. We got there after 1h00. Another 2h00 took us to go around (having it on the right hand) nameless peak 1112m high. We left Lulep Vassjajagasj river on our left and walked 0h40 to place we put our tent.

Since this day we were back on the path we walked from Kungsleden. We changed little our way this time and went higher and surround nameless peak (1078m) on our right hand (until place we camped day 4). We think it is much more convenient way. That day we walked 6h30 to the hill over Aktse. 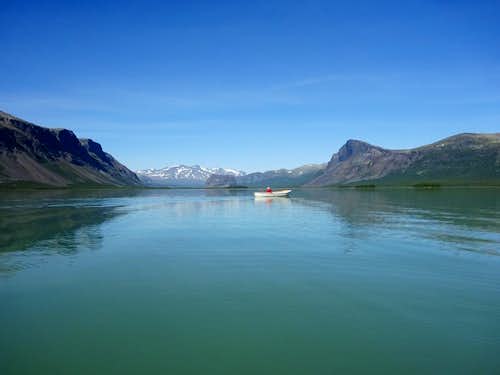 We were lucky that there was a boat, and unlucky that there was only one, so we had to row through the lake three times to leave at least one boat on each side of lake - each crossing took us ca. 45min (see my remarks at the end of review). Finally we left the lake at 11h45.

The path we walked that day was the same as during day 3 and most of day 2.

After 45min we reached small wooden bridge. Next 2h45 took us to get to the bridge we camped on day 2. The next bridge we passed after 1h40.After another 0h50 we camped in the woods, about 20min before hut Partestugan.

It was the same path as during day 1 and part of day 2. We walked 5h10 to our car in Kvikkjokk.

We were in Kvikkjokk late lunch time. We went to Kvikkjokk Fjällstation for nice burgers with chips (the first real meal for 9 days). We discovered there a nice small shop with several things might be needed if forgotten prior trek. There was also a weight but we will not share how many kilograms we lost in Sarek.

Below you can find links to map with marked route we made during the trek.


REMARK: The route is drawn based on a few readings from GPS. Its purpose is show a general directions we went not detailed track based on actual GPS readings. If you would like to get GPX files with above sketch of the route, please write me a message.

2. Mosquitoes. In all parts of our trek where forest was, there were more mosquitoes than one can imagine. Having proper protection is essential issue. We didn't use, like many people, nets protecting head, but anti-mosquitoes good spray only. For us it was sufficient.

3.Boats. There are two ways to cross Lake Lajtaure. You can take a motorboat (200SEK/per.) which goes regularly around 9a.m. and 5p.m. The motor boat can be called by waiving a flag also any time. It supposed to arrive within 30min, but we met a guy who was waiting over 1h with no success.

The other way is to take free rowing boat. It is fun; it takes about 45min to pass the lake. There are three rowing boats and one general rule - you must leave at least one boat on each lake side. That means if you get to the lake and there is one boat only, you need to:

- go to another side by the boat,

- return with two boats and leave one,

- once again take a boat to your destination side.

We suggest saving time for that, especially there is 50% chance you will need to row between lake sides three times. Don’t count on motorboat driver, the only you can expect from him is "good advice", not help.

The rowing exercise wasn’t the best experience; it spoils a lot of fun receiving from Sarek. It seems to be 'designed' so there is chance you waste time and energy and consider motorboat option (I am not considering that somebody doesn’t take boat back). If I were taking care of Kungsleden, I would invest and bought another one or two boats.

4.Times we provide in our trek description don't include any longer breaks we made. Consider it as times of our walk only, not very fast (especially the first three days), but still with no long rest breaks.

5.There is no problem to get fresh water every day; we carried not more than half of litre per person.

6.Except the first day we had excellent weather. We planned our supplies in case there would be 1 or 2 days of rain and we could not walk. Luckily it wasn’t necessary.

7.Waders. We planned to cross Rahpaadno, we had rubber waders. It was really useful while walking through bushes with no path. If you don’t plan cross Rahpaadno, they might be not "mandatory", but definitely take light shoes to cross smaller rivers (e.g. Crock's like most people do).