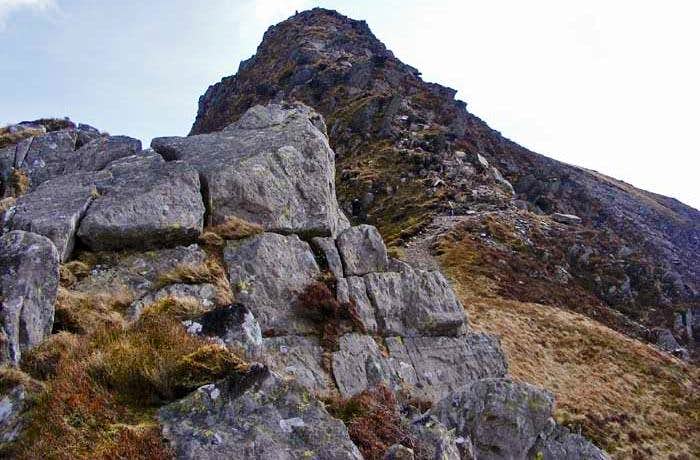 The steep scramble up to the summit of Pen yr Helgi Du. We went mainly up the right hand side!
« PREV NEXT »

(maybe) The name seems to translate into the foreign tongue commonly referred to as "English" as:

"The head of the black Helgi".

Helgi seems to be a nordic (viking) word.

Mr Dadndave, with your Welsh ancestry you should get this. Helgi is the Welsh word for 'hound', specifically a hound used for hunting, since the substantive ci has the prefix hel attached to it. Pen is the word for 'head', but it is also the word for ‘top or ‘summit’, but in the context of mountains does not need to be taken literally. A translation of ‘Head of the Black Hound’ would probably be acceptable under most circumstances, providing the other meanings of the word are understood.

Coincidentally, I have recently been doing a bit of reading about this mountain in preparation for a route page and have found some ambiguities about its name.

W.P. Haskett-Smith in his ‘Climbing in the British Isles Vol. 2’ (1895) claims the Ordnance Survey map of the time calls it Pen yr Helyg Du, Helyg being the word for ‘willow’. It would seem a funny name to give a mountain given that willow does not usually grow on uplands, usually being found much lower down along the banks of rivers and other wet areas. However, Helyg is also the name of the nearby Climber’s Club hut which sits just to the south, in the shadow of the mountain. The hut and the name predate the Climber’s Club, in fact in ‘Wild Wales’ (1862) George Borrow describes an encounter with some children who lived there at the time; it’s a touching passage and has always stuck with me. He describes Helyg as being “a wretched hovel”.

This does lend some support to the theory that the name of the mountain should perhaps be Pen yr Helyg Du, as mountains are occasionally named after lowland features. Lowland features, being the first to be encountered by people moving into an area, are usually the first to be named and therefore it is feasible that name Helyg has some very old origins.

Later in the first proper climbing guide to North Wales, George and Ashley Abraham (1906) give the name Pen yr Helig Du. ‘i’ and ‘y’ can have the same ‘ee’ sound in Welsh and therefore it is easy to see how this spelling mistake could occur. It is also easy to see how the Helig can become Helgi, particularily as Helgi is an actual word.

Of course, we can’t discount the idea that the Ordnance Survey maps that Haskett-Smith was referencing were in fact incorrect; English cartographers have not traditionally been very good at spelling Welsh place names. This probably wasn’t helped by the illiteracy of many of the people the early cartographers would have spoken to or the fact that at the time, there was no recognised standard of spelling. Consequently, we have lots of these ambiguities when it comes to place names.

Anyway, that’s my essay done for the day; how are you mate, it’s been a while?

And you too Bryan, hope things are well and that you’re still busy chasing those Bavarian beer wenches?

I prefer "Head of the Black Hound." Often I climb a peak just because I like its name. It looks like a fun scramble.

You’ll love the name of the mountain next to this one the: Pen Llithrig y Wrach, which literally means ‘Slippery Head of the Witch’.

Possible the best mountain name ever.

With Lolli in Snowdonia(Trip Report)