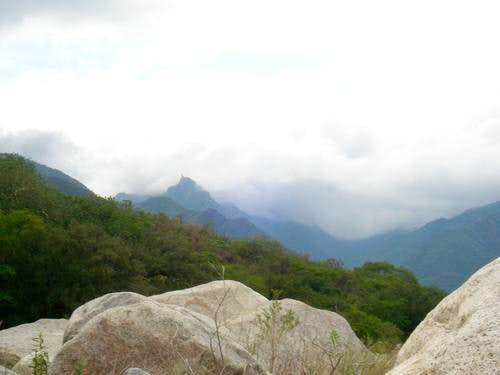 Baja California is a contradictory land of desert and sea. The Sea of Cortez lies to the east and the Pacific ocean to the west with the granite mountains of the Sierra de la Laguna range raising from the dry tropical forest and sandy shores. The region is a mix of rugged mountains, steep valleys and canyons, and vast dry plains.

The range is located at the southern end of the Baja California Peninsula in Mexico. Many of the summits reach the modest height of only 5,000 to 7,000 ft. with sea level being just a few miles away. This magnificent area was declared a Biosphere Reserve in 1994 and is sparsely inhabited, attracting hikers, mountain bikers and naturalists.

The southern tip of the Baja Peninsula is about 1085 miles from the U.S., Mexico boarder and contains three more major mountain ranges; Sierra Juarez, Sierra de San Pedro Martir, and Sierra de la Giganta. They are all part of the Pacific Crest, which includes some of the most famous National Parks in the world including Denali and Yosemite, the Sierra La Laguna is the southern most range of the Crest system and one of the least exploited natural environments left in Mexico. 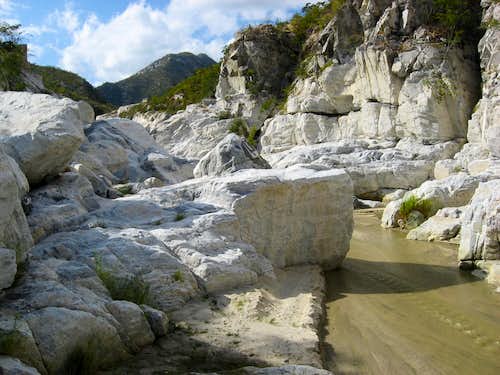 Picacho de la Laguna at 7,090 ft, roughly in the sierra’s center, is considered as the highest peak in the range, although according to some sources Cerro las Casitas may be higher. It is stationed approximately 4 miles southeast of Picacho de la Laguna and measures 6,835 ft. Between these two peaks is a large, flat meadow called La Laguna with an elevation of only 5,600 ft. This depression held a mountain lake until around 1870, when Cañon San Dionísio became sufficiently eroded to drain away accumulated water.


This special stretch of land offers plenty of opportunities for caynoneering, hiking, bouldering, scrambling and summit bagging. There are miles of undeveloped land and hidden trails throughout these mountains. Most who make Baja California their destination come for the fishing, the beaches and the nearby resorts of Cabo San Lucus and only ever notice the Sierra de la Laguna from the airplane window. The mountains are undisturbed, undeveloped and often under appreciated. 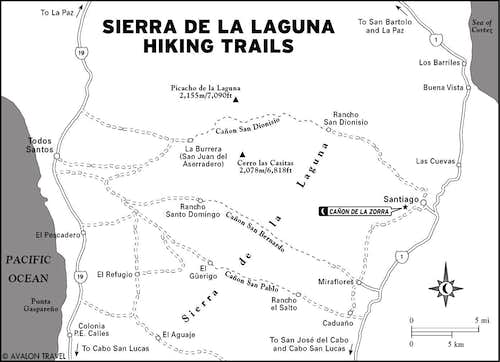 The easiest access point is through the international airport at San Jose del Cabo. The neighboring city of Cabo san Lucus has become a popular tourist destination offering beautiful beach views and resort activities. There are many flights in and out of San Jose daily and the airport is currently under expansion.

If you plan to drive down the peninsula it is recommend you obtain a copy of the Baja California map and plan a route carefully and know exactly where you are headed. Have all necessary documents and permits for international travel before you cross the boarder. It is also possible to drive down the mainland of Mexico and take a car ferry from Topolobampo to La Paz. Driving the Baja and the mountains within can be very tricky.

The southern, lower portion of these craggy reaches can be accessed fairly easily from the Los Naranjos road, reached via Highway 1, heading north from San Jose del Cabo. Mexico Highway 1 encircles the the mountains and is dotted with small towns offering many opportunities to get to know the locals. There are numerous other access points into these mountains, many are unmarked dirt roads or unmaintained cattle trails. Know where you are and where you are going. Many people have been lost in the narrow canyons and there are limited local resources for search and rescue.

Services are few and far between in this part of the Cape Region. San Antonio and Miraflores have Pemex(gas) stations. Buses stop at Santiago, for access to the Sierra de la Laguna, and at La Ribera/Las Cuevas for access to Cabo Pulmo. 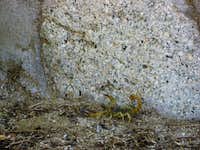 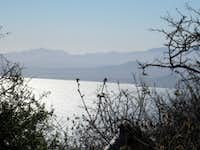 The area holds an eclectic mix of landscapes. The mountains provide a rugged home for an incredible diversity of animal and plant life. It is an ecological treasure house where cacti, palms and pine trees grow side by side and rock pools form underneath towering granite boulders. The dry forests of Sierra de la Laguna are home to some 224 species of plants, half the reptiles and amphibians in the entire Cape Region(the land to the east of the mountains is known as the Cape or the East Cape), and 96 percent of the region's mammals. The highest elevations of the Sierra de la Laguna are blanketed in pine-oak forests, merging with tropical dry forest at about 2600 ft. in elevation. At about 950 ft. in the Cape region the tropical dry forest gives way to the Sonoran Desert. During the long dry season of this ecoregion, many of the trees loose their leaves. 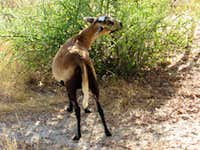 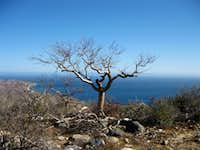 The Baja California Striped Whip Snake, mountain lions and various types of scorpions are some of the more unfriendly wildlife. The mountain lion is the largest predator, but more commonly seen are the coyotes and foxes, as well as smaller mammals such as kangaroo rats, desert mule deer, gophers and badgers. The Sierra de la Laguna skink and the Baja blue rock lizard are a few of the reptiles found here. During wet years, these forests are alive with an abundance of dragonflies and butterflies, including sulfers, whites, hairstreaks, and skippers.

The lower elevations are pron to over grazing by local livestock. There is rising concern that the over use of the lowlands as pasture will disrupt the ecosystem. You can be sure to run into herds of farm animals on roads and trails throughout the Baja.

The Sierra de la Laguna has been called an ''island in the sky'' because of its topography which isolates it from the surrounding deserts. The Tropic of Cancer runs directly across the Cape and the Sierra de la Laguna at 23.5 degree latitude. At its highest elevations, La Laguna qualifies as a cloud forest during the moist summer months, when the peaks are consistently shrouded in mist or rain.

Temperatures in the mountains average highs of 74F in January and 88F in August. At the lower elevations of the Baja, around sea level, temperatures can be much hotter(100F+). The area receives an average of almost forty inches of rain per year on the peaks -- more rainfall than any other part of Baja, except the Californian region to the northeast. This moisture gives support to several unique ecosystems, a rare mix of desert,sub-tropical, tropical, and sub-alpine species that may be found together nowhere else in North America. The tropical dry forest here averages only about eleven inches of rain annually, brought from the south in the form of tropical monsoons and hurricanes which form along the west coast of Mexico. As in most tropical dry forests, this precipitation comes only during a short period in the end of the summer. These monsoons, known locally as ''chubascos'', often feed on the warm waters of the Gulf, bringing heavy precipitation in a short time. The hurricane or monsoon season can begin as early as August and continue as late as November.

There are no back country facilities for campers, you can pretty well camp where you like. Be responsible, make no fires, pack out your trash and don't contaminate any of the water. Leave no trace. This is a raw and rugged land that is highly regarded by locals and foreigners alike. Abuse of it may be cause for restrictions, fees and limited access and use in the future.