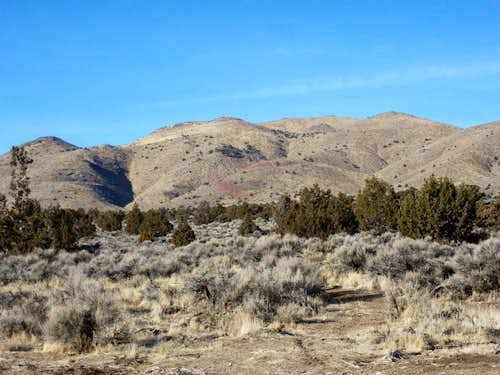 Spanish BM from the trailhead. True summit on the center-right.

Spanish Benchmark (referred to on topographic maps as Spanish BM) is one of the more enjoyable and accessible desert summits north of Reno, Nevada. Although only 6,161', it is a landmark seen from many a vantage point in the city. Located just west of the suburban community of Spanish Springs it is not far from the center of population in Northwest Nevada, it is easily accessible and frequently accessed.

It isn’t part of any single mountain range, instead it rises up on its own from the valley below. Views are excellent because it is surrounded by mountains on all sides. The northern Sierra Nevada are visible to the south, while the highest mountains in the nearby Pah Rah Range are prominent to the east. Mountains surrounding Pyramid Lake are in view, including Tule Peak and Tohakum Peak, although the lake itself cannot be seen.

Spanish BM is best hiked in late fall or wintertime. Mud is a problem in the springtime, and excessive heat and possibly snakes are a problem during the summer. Thus the best times of year are late October through February. Watch out for people on ATV’s, motorbikes, and people who go target shooting. Make your presence known as much as possible.

There are three trailheads you can take. The first is a functional trailhead off Eagle Canyon Road just past Spanish Springs High School on the left side of the road (4640’). There are a significant number of parking spaces since the parking area is just west of baseball fields. We brought a group of 30 people and no problems parking.

If you want to save some distance, drive up another ½ mile and look for a dirt parking area on the left at 4860’. Much fewer spaces here.

Then there is a canyon approach from the north. To reach this shorter route, drive another 1 ¼ miles up Eagle Canyon Road and look for a canyon on the left at about 5120’. Find a place to park on the side of the road. This canyon is not far past the 2.5 mile marker on Eagle Canyon Road. This is the north side route.

There is also an approach from the West side.  Take 395 North to Exit 74 for Lemmon Valley. Take Lemmon Drive for about 3 ½ miles to Arkansas Street on your right. Take it straight out for about three quarters of a mile. There is a dirt parking area. 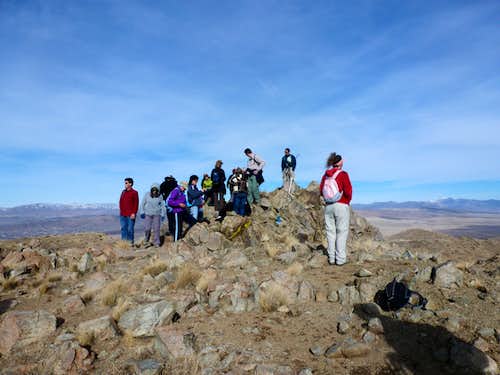 Group at the summit of Spanish BM

Spanish Springs High School trailhead
This is a good starting point if interested in a little longer hike and the recommended route, as it is also the most straight-forward. Across from the southern baseball diamond is a road. The road heads straight west towards the mountain, gradually rising about 390 feet in about one mile. Then the road heads steeply up the slope and winds around up the hills. Once atop the first hill, follow the most obvious route to the summit. 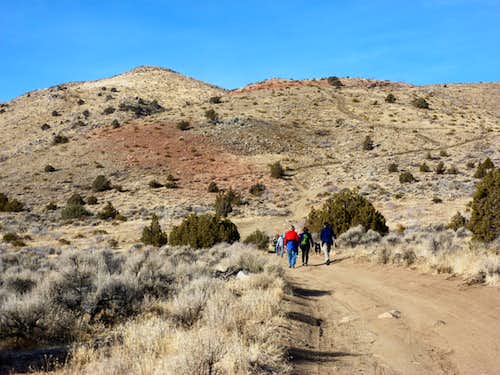 Group heading up into the hills

Upper parking area
From the upper parking area, you follow generally the same route. Head towards the hills, staying to the left of the hill with an “SS” on it for “Spanish Springs”. The road pretty much curves around into the main road up the hills.

It is about 1 ¾ miles one way to the summit via this route with an elevation gain of 1310’.


North side route
This route is far more direct. After finding a place to park, head straight south up a dirt road through the canyon. Follow the road for about 1 ¼ miles at which point you will see a steep road heading directly up to the summit.

It is about 1 ½ miles one way to the summit via this route with an elevation gain of 1050’.


Loop hike
If wanting an even longer hike, start at the Spanish Springs High School trailhead. Head to the summit, but on the descent you can head down towards the north side route instead of back the way you came. Descend the canyon until you see a road about 3/4 miles down on the right. Take this steep road back up for about 500' where it meets back up with the descent road in about 3/4 miles.

The total round trip for this hike is roughly 6 miles, with a total elevation gain of 2050' 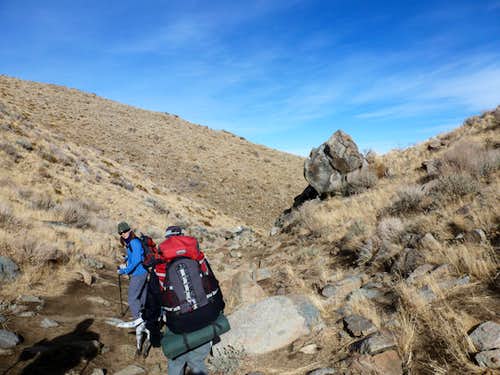 Heading down the canyon which can be used for the loop, or heads back to the start of the north side route

West Side route
Take the dirt road heading east. After about a mile, take a right on a side road that winds around and continue on a road heading east towards Spanish BM.  After a half mile or so, you will cross a large dirt road.  The smaller road continues up the slope of Spanish BM ending in a small circle.  From here, bushwhack steeply up to the summit ridge.  The total one-way distance to the summit is approximately 3 miles, with an elevation gain of about 1,200'.

Point 5915
Unmarked on topographic maps, on the south side of the ridge about 0.4 miles from Spanish BM is a small summit that is fun little side trip to add distance. This can add a good 3/4 miles to the trip with a short 130' steep trek up from its base.

There is no red tape. Spanish BM and all the starting areas described above are on public lands, or entry to public lands. Enter any time without restriction.

One important comment of concern. This mountain has often been treated poorly, with empty beer cans, old clothes, and empty shells left on the ground. This is very unfortunate because it takes away from the precious desert landscape. Please make sure if you hike here to contribute by picking up some of the trash left up there. We removed some beer cans and other junk on January 28, 2012.